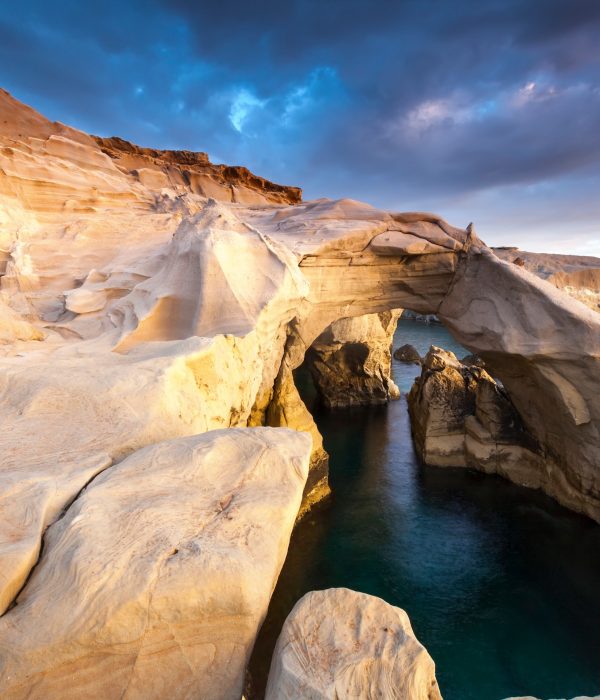 Milos Island – Among the islands of the Cyclades, even of the world, Milos island stands luminously in the history of art. Not because a great artist came from here, or was inspired by it, but rather because of a chance discovery in its soil.

Milos Island’s colours and wealth and the shaping of its history derive from its having been flung out of the sea by volcanoes that blew around two million years ago, the principal crater forming one of the largest harbours in the Aegean at Adamas (‘diamond’ in Greek).  Official website of Milos: https://milos.gr

Hot springs praised by Hippocrates still bubble up around the island. Obsidian was its first star mineral, the traders at Phylacopi selling it to the Minoans for weapons and razors. Pliny wrote of alum that rivalled Egypt’s and declared that it had the most abundant supply of sulphur in the known world. At Theorychia you can see the haunting remains of a sulphur mine clinging to a cliff striped in yellow, rusting wagons still on the tracks, the water crystal clear, the beach stones like a painter’s palette with the colours running together, an odour of rotten eggs in the air. An 11,000-year-old mining industry still thrives through the collection of kaolin, baryte, pozzolan and bentonite. All this geological munificence has produced crystals, solidified volcanic ash and streaks of oxidised metals that make you feel you are in a place that has been dreamed up rather than naturally evolved.

THE SENSATION OF THE SEA IS INTENSE, THE SOUND AND AROMA OF IT AT NIGHT, THE DANCE OF LIGHT ON IT THROUGH THE DAY.

If the great bay were a mouth, the cape containing Skinopi would be its upper jaw. Here the Milos island is at its most dense, with the harbour town of Adamas down around the molars and, going northwards, Tripiti, Plaka, the syrmata villages, the catacombs, amphitheatre and site of the Venus discovery. East along the north coast is one of the most startling natural events you might encounter: the narrow blue bay at Sarakiniko, its arms bone-white rock, a kind of petrified foam with undulations like bed sheets in the wind, and occasional eruptions of Dalí-style swirls. Near the water level, pirates’ chambers have been cut out of the stone. Further along, at the north-eastern tip, is serene Pollonia, which has Milos Island’ best hotels, some excellent harbour-side restaurants and the island’s only commercial winery, Kostantakis.

The beaches of Milos Island have, a unique allure. You wake up wondering what they will offer. There is one, or more likely a dozen, for any taste. At Paleochori you can have lamb or fish cooked in the geothermal sand. Firiplaka is gold, purple, rose and white.

Enjoy 80 amazing beaches with your better half; among them stands out Kléftiko with its turquoise waters and Sarakíniko with white sharp rocks cutting deep into a sheer cliff; add the unique lunar landscapes, the rocky secluded caves, the mysterious catacombs, the “sleeping” volcanoes and a picturesque Cycladic Chóra and experience a unique version of romance!

As many beaches as you can! The white rocky landscape that embraces Sarakíniko forms an once-in-a-lifetime encountered lunar landscape while on Kléftiko, which can be reached only by boat, you can dive in secluded rocky caves with crystal clear waters. Add the wild beauty of Alogomántra, the open cave of Papáfragkas, the sheltered Ahivadolímni- the biggest beach on the island where also the island’s camping site is situated- and the beaches of Fyripláka, Yérakas and Tsigrádos adorned with grayish-red rocks.

Only on Milos and its neighbour, Kimolos, will you encounter small colourful houses by the sea, the so-called “sýrmata”, which the fishers used as shelter for their boats in winter. Other sites worth visiting are the Catacombs of Tripiti and the mystical Sulfur Mines. The whole area of Trypití is full of caves carved on the rock that were used as family tombs.

Another highlight is the white-washed Chóra adorned with beautiful churches, such as Panayiá Korfiátissa and the Catholic Church and well worth visiting Museums such as the Folk Art and the Archaeological Museum, where also a replica of the masterpiece of Aphrodite of Mílos Islandis kept. Adámantas, built like an amphitheatre overlooking the Aegean, is the second biggest natural harbour in Greece and is quite famous for its frenetic nightlife.

Don’t forget to visit Apollonía, on the northwestern tip of the island; looking for an unforgettable experience? Rent a boat from its picturesque little harbour to guide you through the island’s rugged beauties or to take you to the opposite situated island of Kimolos!

Milos boasts the biggest network of dirt roads on the Cyclades. Set off with your partner on a walking tour following ancient-old paths, which used to be the only “road network” until the previous century. Many of them lead to secluded beaches of pure wild beauty. Try easy routes like the one starting from Catacombs and ending at Profétis Elías (2,5 km, 35’); more difficult routes like the route Filakopí- Papáfragkas -Sarakíniko- Mandrákia (9km, 3hr) or a five-hour-route from Cape Vani to Áyia Marina boasting an astonishing landscape variety. The area of Ahivadolímni is ideal for wind-surfing, whereas the dirt road network in the areas of Emporió and Trahilas is perfect for off-road adventures.

On the island you will mostly find family-run guesthouses; the big and luxurious five-star hotels have only established their presence over the last years. You can also choose to stay in one of the traditional colourful houses by the sea, the so-called “sýrmata”, mostly found on the settlements of Klýma, Madrákia, Mýtakas and Fyropótamos.

Wander around the castle district at dusk when the sun washes Chóra with its warm golden light… The Castle’s top, the benches on the courtyard of Panayiá Korfiátissa church or Panayiá Thalassýtra are all ideal spots to enjoy this breathtaking scenery that will certainly weave a powerful spell on you… How about private dives on secluded beaches and well-hidden rocky caves? Rent a boat from Adamantas Port and you will find yourself on beaches that you have never thought of putting foot on in your life!

Want to see our vacation packages that include Milos Island? Click here