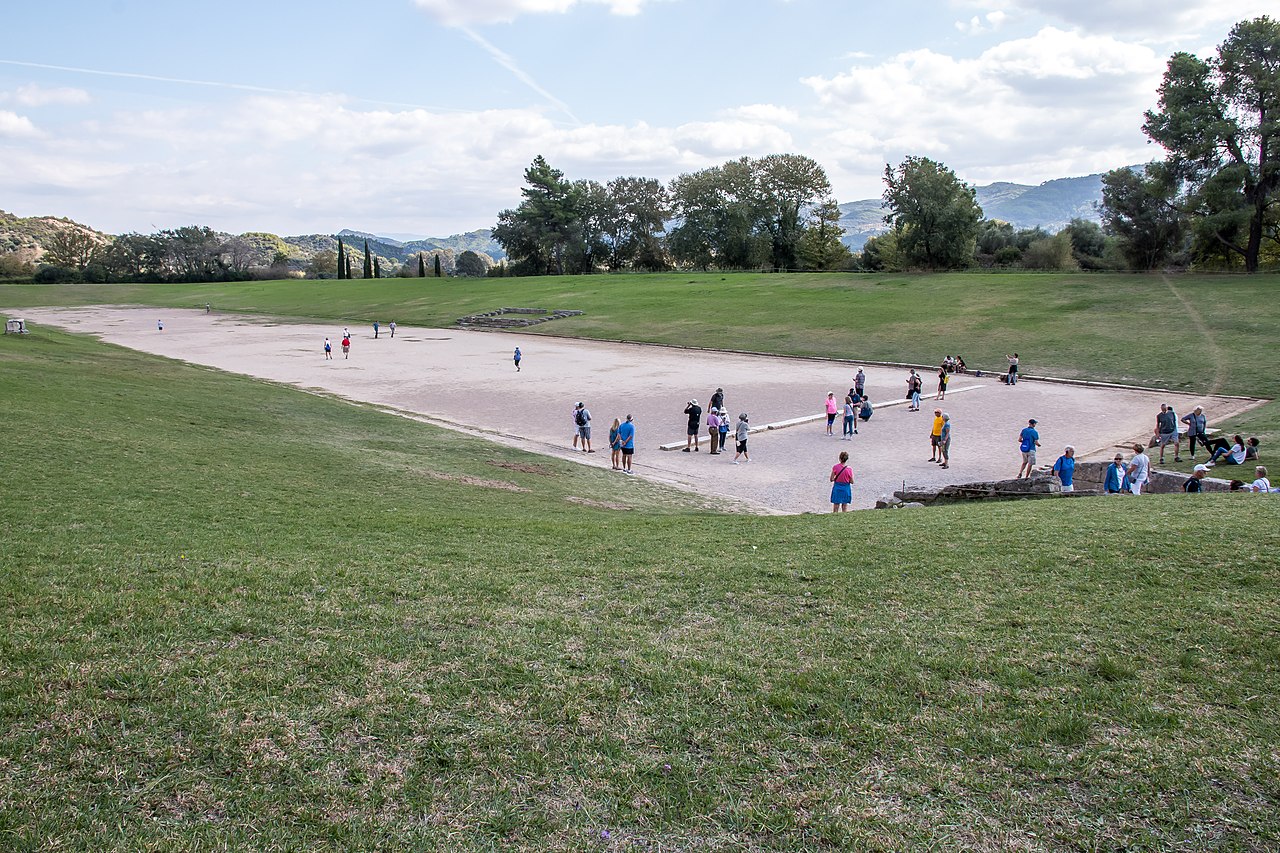 Olympia Travel Guide : In the western Peloponnese, in the “Valley of Gods”, lies the most celebrated sanctuary of ancient Greece, and the birthplace of the most important athletic mega-event of all times; the Olympic Games. Olympia is one of the most well known tourist destinations in Greece, and one of the most powerful brand names worldwide. Olympia is easily accessible from other areas of interest of Greece.  It is less than 4 hours away from Athens and only 1 hour from Patras port, or Kalamata airport. There are numerous daily buses and trains that connect Athens to Olympia. Another option for getting to Olympia from Athens is to take one of the many sightseeing tours available out of Athens.

The visitor can walk though the impressive ruins of the area where athletes trained and run in the ancient stadium; just as the ancient Olympians did after their victory 3000 years ago. They can also visit the museum and get the chance to see some unbelievable sculptures such as the sculpted decoration of the temple of Zeus, one of the Seven Wonders of the Ancient World, the famous Hermis of Praxiteles and the statue of Nike of Paionios.

The site was excavated from 1875 by German archaeologists. A direct consequence of these excavations, was the revival in 1896 of the Olympic Games, by Baron Pierre de Coubertin. His heart is buried at Olympia in a cairn commemorating him. The first revived Games were held in Athens in 1896 at a stadium built on the site of the stadium of antiquity. The first competition held at Olympia, Greece was nothing to do with going for the gold. In fact, it was a chariot race that would determine who would win the hand of a beautiful princess, and inherit her father’s kingdom. King Oionomaos of Elis, had a daughter who he loved very much, so he challenged each of her suitors to a chariot race. Thirteen of them died before a man named Pelops came along and took up the challenge. Pelops bribed the king’s charioteer to put wax in the wheel casing of the king’s chariot. In the race, Oionomaos was killed, and Pelops inherited his princess-bride and the kingdom.  Pelops gave his name to the Peloponnese area of Greece where Olympia is located. The first historically recorded Games began in 776 BC and were funeral celebrations in honor of Pelops who had succeeded King Oionomaos of Elis after the victorious chariot race.

The Games in Ancient Greece

The Games were held every four years in July or August according to the full moon. It was customary to call a truce between warring city-states when the summer games were held. All feuds and differences among the Greek city-states ceased so the young men could leave to participate in or attend the games.  From 776 BC lists of the winners were kept engraved on stele at the stadium, and thus began the method of Greek chronological reckoning by Olympiads. Later, other sports were added such as the two-stade (stadium) race, the long-distance race and the pentathion. In the 7th century, boxing, chariot racing and the pankration were included and in the 6th century, a race with weapons. The winners received a branch of the sacred olive tree, but were also rewarded by their home cities. The Games were just for men. Only one woman was allowed to attend the events in the Stadium. She was the priestess of Demeter who sat on her dais by the shrine opposite the tribunal of judges. The Greeks believed it was Herakles who laid down the regulations for the games and specified the length of the stadium (stadion). The stadium, which seated 30,000 people, had no seats. Spectators sat on the grassy slopes around the 183-meter oval. The athletes sole aim was to win an olive crown and the praise of their fellow man. Today, it’s fun to stand at the starting line and dash to the finish. On a hot day, shed a few clothes or, if you’re really brave, run naked like the athletes of old did.

This is the stadium where most Olympic Games used to take place in the antiquity. The racetrack is over 200 meters long and nearly 30 to 34 meters wide.

One of the oldest temples in Greece, this temple to goddess Hera was constructed in the 7th century BC according to the Dorian style. Today this is the altar where the Olympic flame is lit before the games.

Located close to the stadium, the Temple of Zeus was built in the 5th century BC by a local architect. The temple was made of limestone and marble. Historical records narrate that a giant golden statue of Zeus was found inside this temple.

The Philippieion, the only circular building inside the Altis, is one of the finest examples of ancient Greek architecture. Located west of the temple of Hera, it was dedicated to Zeus by Philip II of Macedon.

The palaestra is situated west of the Altis enclosure, near the Kladeos river. Built in the third century BC as part of the gymnasium complex, it was used to practice boxing, wrestling and jumping.

Considered among the best museums in Greece, the Archaeological Museum hosts findings from the ancient site and from other excavations in the area. Well labeled and with many rooms, the most famous exhibits of the museum are the statues of Hermes of Praxiteles and of Nike Paionios.

The Museum of the History of the Olympic Games is housed in the old archaeological museum in Ancient Olympia. It houses findings from the entire area that are related to the ancient games.

The bouleuterion, or Council House, one of the most ancient and important buildings of the sanctuary of Olympia, was the seat both of the Elean Senate, whose members were responsible for the organisation of the games.

How to Get to Olympia from Athens?

Olympia is one of the most significant archaeological sites in Greece. On this page, you will find out in which ways you can reach and explore this wonderful destination!  Don’t forget to get informed about the local transportation options you have, in order to organize your transfer to your hotel and explore Olympia easily!

Holidays (not open to the public)

Other Attractions Close to Olympia

Visitors can also enjoy festivals such as the Ancient Olympia International Festival and the Alfios River Eco-festival, where they can explore the magnificent natural environment of the Alfios River, Kato Samiko’s unspoiled beach that is only 18km away or enjoy the natural Kaiafas Thermal Spa. They can also have the option of taking part in activities such as walking along the promenade, and sports such as biking, rafting, kayak, kite-surf, etc. Olympia can also become your base for your ventures to the border region. It is only 33km from Katakolo port and village, 30km from the Temple of Apollo Epikourios, 30km from the Temple of Aphrodite, 57km from Ancient Ilida, 60km from Chlemoutsi Castle and many others.