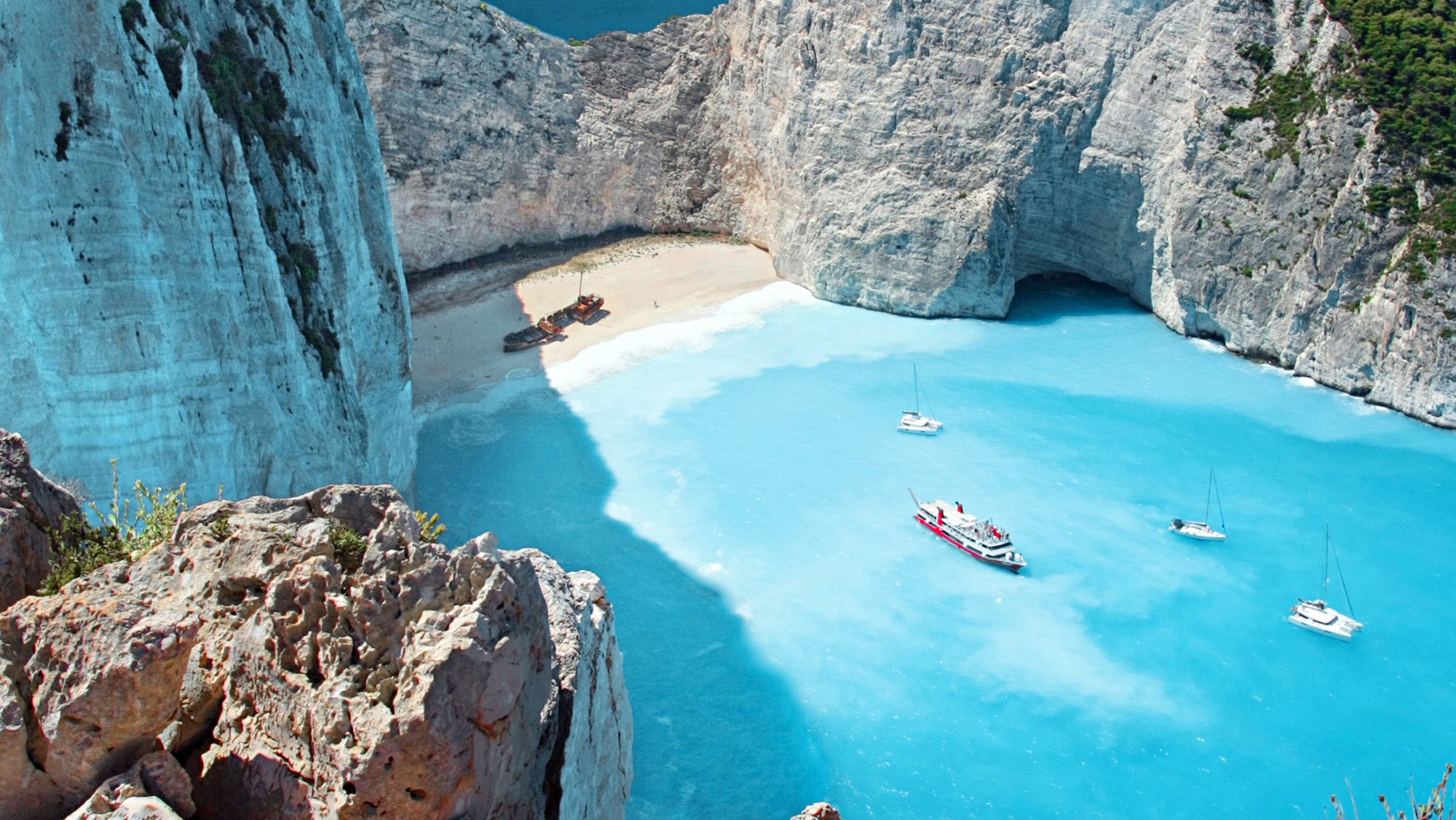 Zakynthos Travel Guide: Zakynthos (aka Zante) is a verdant island endowed with fertile valleys and a temperate climate (area: 406 sq. km; coastline: 123 km). Its landscape diversity has resulted in different types of beaches: there are sandy beaches in secluded coves where the tranquil waters are deep blue on the island’s southeastern part; yet, if rugged cliffs and an interesting underwater world are to your liking, try the western part of the island.  The Venetians, who ruled Zákynthos from 1484 to 1797, called the island “Fioro di Levante” (flower of the East) as there are over 7,000 species of flowers on Zákynthos. The third largest island of the Ionian Sea, after Corfu and Kefalonia, is internationally known as “Zante”. Zakynthos is said to have been the island’s first inhabitant and the ancient acropolis is attributed to him. He was the son of Dardanos who ruled the ancient kingdom of Frigia. A Venetian fort was built at later times on the site.

How to Get to Zakynthos?

Traveling from Kyllini to Zakynthos by ferry

Traveling from Athens to Zakynthos by flights

The Venetian architectural influence has left its stamp on Zante despite the damage sustained due to the seismic activity in the area. After the ravaging 1953 earthquake and the ensuing fire, a number of historical buildings and churches burned to the ground. Consequently, the significant treasures these buildings were housing perished. The town was rebuilt according to a plan where strict anti-seismic specifications applied and, to a large extent, respecting the town’s former architectural structure. On Zante, great care is taken to protect two endangered animal species, namely the caretta aretta sea turtle and the monachus monachus seal.  The city of Zakynthos is the capital of the island and at the same time the island’s port.

Probably the most photographed and, arguably, beautiful beach in all of Greece, Shipwreck Beach lies in the so-called Smuggler’s Cove on Zakynthos’ west coast. Made up of fine white pebbles backed by cliffs, the beach takes its name from the wreck of a contraband cigarette smuggling ship that washed up here in 1980. The most special aspect of this beach is that it can only be accessed from the sea — grab a taxi-boat from the harbor at Agios Nikolaos, which is on the island’s northeast coast, 32 kilometers from Zakynthos Town.

On the main square in Zakynthos Town, this purpose-built museum displays religious icons, frescoes, and sculptures from the island’s churches and monasteries, dating from the 12th century onwards. You’ll see Byzantine icons carved into wood and there are two rooms dedicated to 18th-century oil paintings. There’s also a scale model of the town from around 1950, giving you some idea of how it looked before the devastating 1953 earthquake.  Address: Solomos Square, 29100 Zakynthos Town

Built in the 1660s, this proud mansion is one of the few old buildings to have survived the 1953 earthquake, which wiped out most of Zakynthos Town. It is owned by the Roma family, who decided to renovate it and opened it to the public in 2007. Inside, you can see period furniture, paintings, and books, giving you some idea of how local aristocrats lived in the centuries prior.

On the northern tip of the island, at Cape Skinari, you’ll find the most spectacular so-called Blue Caves. Inside, the bright blue sea reflects the color of the sky, which is mirrored off the walls of the caves and creates an absolutely magical azure and sapphire light scheme. You can visit the Blue Caves in a small glass-bottom boat, which departs from Agios Nikolaos (on the northeast coast, 32 kilometers from Zakynthos Town), or as part of the longer round-the-island cruise from Zakynthos Town.

On the southeast coast, eight kilometers south of Zákynthos town, the wide bay of Laganás is home to several blissful stretches of sandy beach. Since the 1980s, it has been the island’s top resort, with budget accommodation attracting young visitors in search of sea, sun, and fun. This area is also the breeding ground for the loggerhead sea turtle, which is an endangered species, known for being very timid. An estimated 1,300 loggerhead turtles live around Laganas Bay and are protected in the Zakynthos National Marine Park, which was founded in 1999 to limit access to certain parts of the beach during the nesting season. To learn more, visit the park’s exhibition center in Dafni, at the east end of Laganas Bay.

A must-do for animal lovers, Askos Stone Park is in the north of the island, close to the village of Volimes, 30 kilometers from Zakynthos Town. It’s highly recommended for children — animals here include deer, raccoons, peacocks, and tortoises, as well as a pony, donkey, goats, and chickens. You get a map and a bottle of water with the entrance ticket, and there are attendants in the park who can explain where the animals are from and how to feed them.