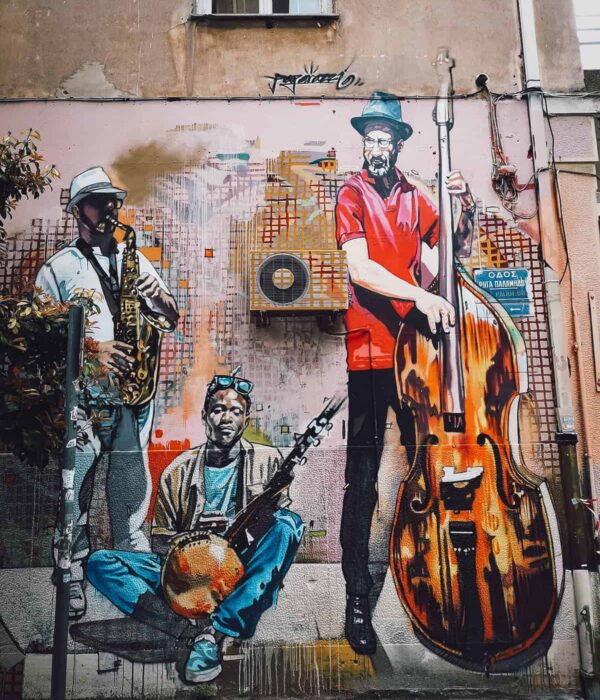 Athens Street Art – Just like anywhere else, street art is also a means of communication, with graffiti artists using it as a way to express their opinions, whether political, social, or not.  Athens has been known for many things throughout the centuries: architecture, civilization, food, nightlife, and many -way- many more. Another thing, however, is its street art, this unique way of expressing feelings, criticizing everyday issues and problems, and aiming to share a subliminal message to its viewers. This is what we can actually call “graffitiing to raising awareness”. Read more about Athens

Street Art is Art, not Vandalism

From walls to vans, benches and dumpsters, these are just a few places where you may find these extravagant and magnificent works of street art. Right around every corner awaits you one incomparable graffiti to lighten your day up and give you a glimpse of the alternative beauty of Athens. It is, of course, not always welcome by the locals, but it has become a common spectacle of the city, although illegal, yet not removed. Most of them can be found throughout the city, in neighborhoods like Metaxourgeio, Psyrri and Gazi, Anafiotika, and Exarcheia, where artists use street walls as their canvas to make a political statement, to create something abstract and meaningful, or to affect people’s mentality in a funny and provocative way.

Rising in the austerity as a positive side effect of the economic struggle and for some even a bare survival – On the shores of the mythical islands and on a larger scale in its capital something else has been bubbling up in the recent decade: the street art in Athens.

Let’s now discover some of the most vibrant street art in the Greek capital.

In the gritty neighborhood of Exarcheia, a stronghold of anarchists, more than a decade’s worth of tags and graffiti have been leavened with a catalog of Mapet’s stencils and the work of other street artists, who paint violent yet graceful anti-Fascist images, grotesque caricatures of bankers and politicians, and intricate sticker work on street after street.

Such work has spread to the nearby working-class neighborhoods of Metaxourgeio and Kerameikos, where a growing number of so-called hipster artists, despised by hard-core graffiti artists, also have been leaving their mark. Many of the newcomers are trained at the Athens School of Fine Arts, which gives courses in street painting that have spawned edgy new outdoor works addressing racism, capitalism and exploitation.

Psyrri is considered the area for those of you who seek the true local experience, where you can find the best place to drink some tsipouro and ouzo accompanied by tasteful ‘mezedes’, and where small, yet intriguingly smashing bars and clubs are located. Here you can, however, witness the impressive art of several street artists that make you travel to the modern side of one of the oldest neighborhoods of the center of Athens.

The neighborhood that combines the industrial lifestyle and the modern mentality of today. Nevertheless, at the same time, it stands out for its unparalleled street art found everywhere your eye can see, as well as its nightlife possibilities. Here you can find works made by INO and Borondo, many of which decorate the narrow streets of the district.

At Anafiotika and Plaka, you will find a great number of unique creations, filling the picturesque area with art and making it an even more beautiful place for you to visit during your stay here. Making your way on the narrow streets just underneath the Acropolis, you will discover the works of the French artist Oré, Dimitris Taxis, Basek and many more.