a war that shaped today

Gallipoli is a peninsula locality in north-western Turkey, close to Istanbul. The Gallipoli Peninsula is the site of extensive First World War battlefields and memorials on the north bank of the Dardanelles Strait. It is a commemorative site for the Allied (British Empire, France) and Turkish forces who fought, died and were wounded there.

Lone Pine Australian MemorialThe Gallipoli campaign, also known as the Dardanelles campaign, was a military campaign in the First World War that took place on the Gallipoli peninsula (Gelibolu in modern Turkey), from 17 February 1915 to 9 January 1916.

The campaign is often considered to be the beginning of Australian and New Zealand national consciousness; 25 April, the anniversary of the landings, is known as Anzac Day, the most significant commemoration of military casualties and veterans in the two countries, surpassing Remembrance Day (Armistice Day).

In January 1916, after eight months’ fighting, with approximately 250,000 casualties on each side, the land campaign was abandoned and the invasion force withdrawn. It was a costly defeat for the Entente powers and for the sponsors, especially First Lord of the Admiralty (1911–1915), Winston Churchill. The campaign was considered a great Ottoman victory. In Turkey, it is regarded as a defining moment in the history of the state, a final surge in the defence of the motherland as the Ottoman Empire retreated. The struggle formed the basis for the Turkish War of Independence and the declaration of the Republic of Turkey eight years later, with Mustafa Kemal Atatürk, who rose to prominence as a commander at Gallipoli, as founder and president.

Lone Pine Cemetery is a Commonwealth War Graves Commission cemetery dating from World War I in the former Anzac sector of the Gallipoli Peninsula, Turkey and the location of the Lone Pine Memorial, one of five memorials on the peninsula which commemorate servicemen of the former British Empire killed in the campaign but who have no known grave.

On the morning of 7 August 1915, the 8th (Victorian) and 10th (Western Australian) Regiments of the third Light Horse Brigade vaulted out of their trenches at the Nek and into withering fire. They were cut down before they reached the enemy line. This episode was immortalised in Peter Weir’s 1981 film Gallipoli.

Chunuk Bair (Conk Bayiri in Turkish) was the first objective of the Allied landing in April 1915, and is now the site of of this cemetery and memorial, and the Conkbayırı Atatürk Anıtı, a huge statue of the Turkish hero Mustafa Kemal (later Atatürk), leader of the Ottoman 57th Regiment.

Near Kabatepe village, Brighton Beach was a favourite swimming spot for Anzac troops during the campaign. Today, this is the only officially sanctioned swimming spot on the peninsula.

Allied cemetery 200m from Lone Pine cemetery, accessed by a road that marks what was the thin strip of no-man’s land between the Turkish and Allied trenches.

Gallipoli Tours – Initial Anzac landing site on the ill-fated morning of 25 April 1915. On 25 April 1915 Australian soldiers landed at what is now called Anzac Cove on the Gallipoli Peninsula. For the vast majority of the 16,000 Australians and New Zealanders who landed on that first day, this was their first experience of combat. By that evening, 2000 of them had been killed or wounded. 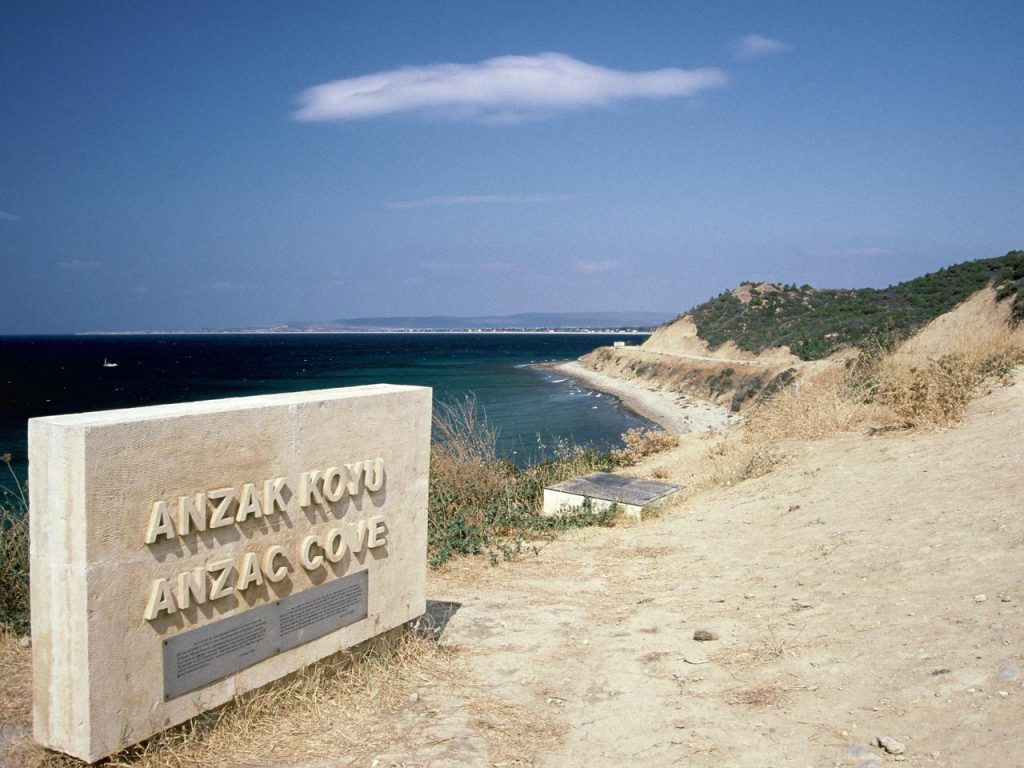 Moving Turkish monument inscribed with Atatürk’s famous words of peace and reconciliation spoken in 1934. After restoration in 2017, it was reinstated in its original position.

North Beach commemorative site to Anzac troops where dawn services are held on Anzac Day (25 April) and site of the oft-photographed Anzac monument.

Mehmetçiğe Derin Saygı Anıtı is dedicated to ‘Mehmetçik’ (Little Mehmet, the Turkish ‘tommy’ or ‘digger’), who carried a Kiwi soldier to safety.

Moving Turkish monument inscribed with Atatürk’s famous words of peace and reconciliation spoken in 1934. After restoration in 2017, it was reinstated in its original position. Gallipoli Tours