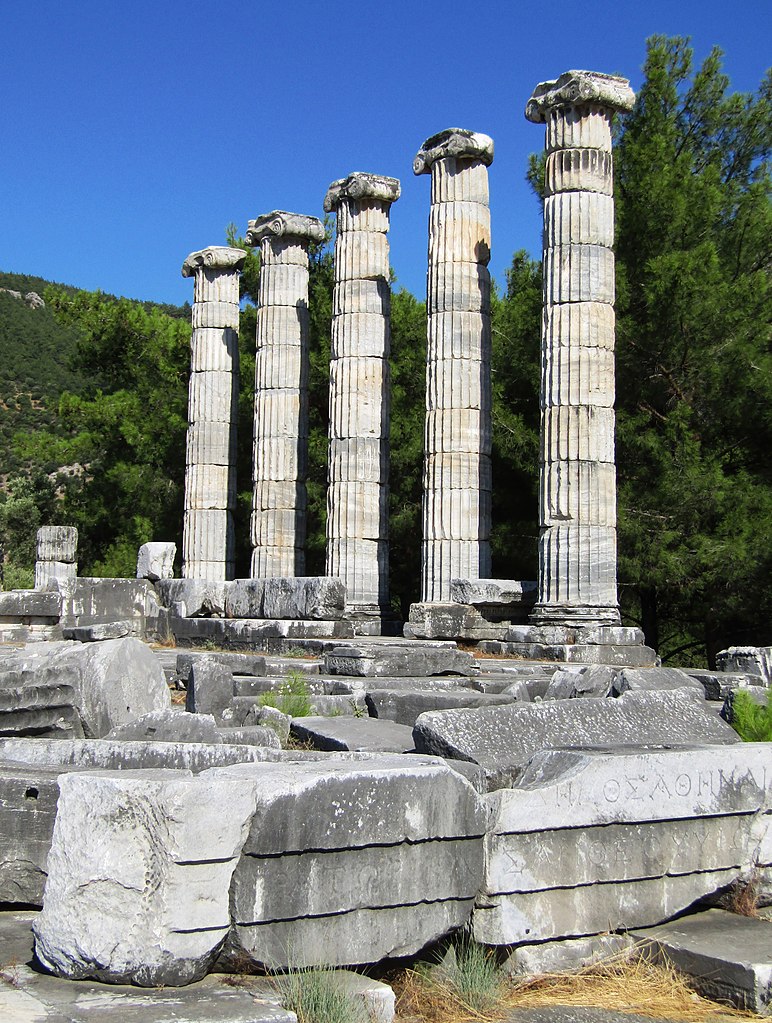 Priene Travel Guide – Priene is an ancient Hellenistic city located just to the north of Miletus in Western Turkey. It was an ancient Greek holy city and the home of an important temple of Athena. Priene’s picturesque ruins include several columns of the Temple of Athena, much of the city wall, a well-preserved theater and a council chamber. The ruins are next to the modern town of Güllübahce. The city was planned from the level of each street down to the place and purpose of the private rooms. At first it was a model polis and an embodiment of the classical virtues. But in a world in transition Priene could not stand still. All this changed. The houses were divided to create more houses but also combined to create larger residences – but only the happy few would have profited from those changes.

By the 8th century BC Priene was a member of the Ionian League. The League’s central shrine, the Panionion, lay within the city’s boundaries, making Priene an important holy city. Priene was sacked by Ardys of Lydia in the 7th century BC but regained its prosperity in the 8th. Captured by the generals of the Persian king Cyrus around 540 BC, Priene took part in several revolts against the Persians (499–494). The city was subject to the Persians until the time of Alexander the Great. The ruins seen today date from when the city was rebuilt around 350 BC after frequent attacks by the Persians. Priene was originally a port city, but the continuous silting caused by the Meander River had by this time blocked the city’s access to the sea. The new city was thus built farther inland, on the present site. The new city’s main temple, of Athena Polias, was dedicated by Alexander the Great in 334, who stayed here during his lengthy siege of Miletus. Another famous resident of Priene was the philosopher Bias, one of the Seven Sages of Greece, who was born here. In 129 BC Priene was added to the Roman province of Asia Minor. It was sacked by Mithridates, King of Pontus, in 88 and 84 BC, but regained its former wealth and prosperity under the Emperor Augustus. The cult of the Roman emperor was performed in the Temple of Athena and the Sacred Stoa. The little city grew slowly over the next two centuries and led a quiet existence. Unlike its more well-known neighbors, Priene’s population was limited and probably never exceeded 5,000. This was probably due in part to its cliffside location. Priene is not mentioned in the Bible, but it is likely that the early Christians of Miletus had contact with the city.

Priene had a substantial Christian community during the Byzantine period and was the seat of a bishop. Four of Priene’s bishops are known: Theosebius, present at the Council of Ephesus (431); Isidore, who was living in 451; Paul, present at the Council of Constantinople (692); and Demetrius (12th century). Priene gradually declined due to its increasing distance from the sea, and it was abandoned after passing into Turkish hands in the 13th century AD. Excavations of the site began in the 19th century.

Pythius designed a city for about 5000 inhabitants. They were not all citizens. The number of men with citizenship was approximately 1500. So it was a polis with an average size. The city was in her early period political autonomous and kept that independence for quite a long time. To create social homogeneity Pythius designed each house in the same way: the houses had two floors and were all facing the south. The sun could in that way heat the houses in the winter and in the summer the roof provided cooling shade. On the ground floor there was space for storage or a shop. A small courtyard, the main living area, and an andron. The andron was the room were the men held their symposia.

The andron was rather small, because there was only room for six people.  On the upper floor were the sleeping rooms and the room for the women. The houses in the city centre were probably more desirable than the houses at the edge of the city. It is likely that the houses  by a lottery were distributed. This would strengthen the sense of community of the citizens. There are of course a few remarks on the design of Pythius. The houses and rooms he designed were already outdated. In late classical Athens the smallest houses had an andron of the same size as the androns in Priene. This would be the root for the changes in the Hellenistic period.

The ruins of Priene are well worth a visit. They are in a peaceful, sheltered location and feature a number of unique side streets and structures. Its well-preserved remains are a major source of information about ancient Greek town planning. Long stretches of the Hellenistic city wall have remained intact, in some places 6 feet wide and 18 feet tall. Inside, the city’s remains lie on successive terraces that rise from a plain to a steep hill, upon which stands the Temple of Athena (see below). Priene was laid out in an orderly grid plan, unlike the more sprawling arrangement of most ancient cities. Six main streets run east-west and 15 streets cross at right angles, all evenly spaced. The town was thus divided into about 80 blocks, or insulae, each averaging 150 by 110 feet (46 by 34 m). This impressive layout can be appreciated from the vantage point of the nearby cliffside.

About 50 of the insulae are devoted to private houses. The better-class insulae had just four houses apiece, but most had many more. A Priene private house usually consisted of a rectangular courtyard enclosed by living quarters and storerooms and opening to the south onto the street by way of a small vestibule. Ruins of several houses can be seen today, including the “Alexander House.”

Five columns (from the original 66) of the great Temple of Athena Polias still stand. Built on the orders of Alexander the Great around 333 BC and designed by Pythius, architect of the Mausoleum of Halicarnassus (one of the wonders of the ancient world), the Temple of Athena is considered a classic example of the pure Ionic style. The temple enclosed a smaller (23 ft/7 m) high version of the statue of Athena that was in the Parthenon.

Near the temple in the center of town is the agora, stoa and theater. Theaters are common around these parts, but this one boasts a set of five armchair seats, some with lion-paw armrests. The stage buildings of Priene’s theater are also more intact than most. Originally built in the 4th century BC by the Greeks, the theater was expanded by the Romans in the 2nd century AD to hold 6,000 spectators.

Other ruins at Priene include the well-preserved seating and altar of the 2nd-century-BC bouleuterion (city council chamber, which could hold 650 people), more temples, the stadium (2nd century BC; 190 m long) and a Upper and Lower Gymnasium.

The second major interruption of Priene’s grid system is its other heart, the sanctuary of Athena, set on a prominent rise supported by a massive terrace wall to the Northwest of the agora. This was the city’s chief shrine to its patron goddess, including a large and ornate open-air altar and the large Ionic Temple of Athena Polias (protector of the city) itself, one of Priene’s most prominent monuments then as now, not least due to the five re-erected columns. It is not difficult to imagine this large marble edifice gleaming in the Aegean sun, visible to travelers and seafarers far afield, signaling Priene’s piety, wealth and cultural ambition. Although the temple was begun when the city was refunded here, it was only completed five centuries later, perhaps indicating Priene’s financial difficulties. The complex is not the only religious shrine in Priene. In fact, an exploration of the city is an admirably clear demonstration of ancient Greek polytheism with its series of cults. Other shrines at Priene include a small temple near the agora, perhaps dedicated to Zeus, the sanctuary of Demeter, goddess of agricultural fertility, on the slopes of the acropolis, a place of worship for the “Egyptian Gods” and one for Alexander the Great. Another god whose worship must have been important is Dionysos, god of wine and drama.

Priene lies close to the village of Güllübahçe, which is a small and pretty Turkish village where you’ll also find restaurants and even a bed for the night. Priene can be visited daily after paying a small entrance fee. The ruins are accessible from 8:30 am all year, closing at 7:30 pm from April to October and at 5:00 pm the rest of the year. The paths are well way-marked, and you’ll find information boards near most of the ruins. As the ruins are located on a rather steep hill, it is wise to wear good walking shoes and bring protection against the sun, as well as food and plenty of drinking water. You reach Priene by car following the direction of Söke after leaving the İzmir-Aydın main road. Then drive on to Güllübahçe by following the brown signs to Priene. This is a perfect day trip from Kuşadası, Didim, or Bodrum. Combine it with lovely Eski Doğanbey and a visit to the Aziz Nikolaos Church in Güllübahçe.