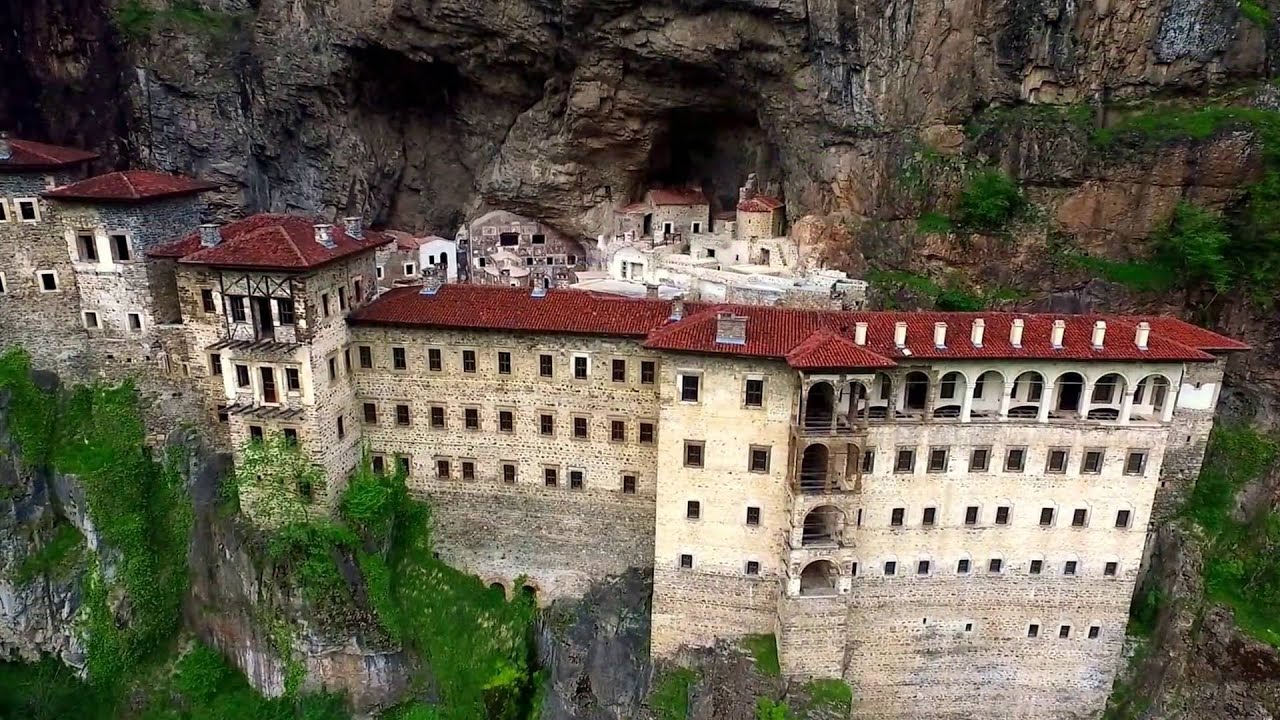 The Sumela Monastery, sitting at the foot of a cliff facing the Altindere Valley in Maçka, in the Trabzon province, is known to locals as ‘Meryem Ana‘ (The Virgin Mary). The origins of its name are uncertain. Some sources say it comes from ‘Melas,’ which means black, or from the mountains on which it stands, called the Karadaglar (Black Mountains). Other experts believe that the name comes from the black color of the icon of the Virgin Mary, a very likely hypothesis as Black Madonnas in the region are a very common sight.

The building itself, constructed in the midst of the rocks, combined with its natural setting lends Sumela Monastery a mystical appearance.  It is one of the oldest and most beautiful monasteries on earth.

The Sumela Monastery is reached by means of a steep path through the forest. Its entrance was evidently designed with security in mind and final access to the building was via a long, narrow flight of steps. A large aqueduct abutting the mountainside at the side of the steps brought water to the monastery. Old photographs reveal a structure with ten wide arches which is in extremely good condition, but it is now in ruins. As you pass through the main entrance, where there is accommodation for the doorkeeper and other rooms you descend a flight of steps into an inner courtyard. In the center on the left is a church built on to the cave containing the sacred spring, opposite which are a number of monastery buildings laid out in a random fashion. On the left side of the courtyard is a comparatively new fountain where the waters of the sacred spring oozing from the mountainside collect. It is now half ruined and full of rubble. On the left, inside the cave, is the church-which is the oldest part of the monastery. The church juts out at right angles into the courtyard. And its walls are covered with frescos, both inside and out.

Two Greek priests, Barnabas and Sophronios, founded the Sumela Monastery in 386AD during the Roman times. It was built on the steep cliff in the Macka region of Trabzon, standing 1,200m tall in the country’s Black Sea region. In the 13th century, Trabzon became the capital of the Komnenos Dynasty, which became a separate state to the Byzantium Empire. In the second half of the century, the monastery took its current form. When Ottoman Sultan Mehmed II conquered Trabzon in 1461, he ordered the protection of the monastic complex and gave some privileges and special rights to it. After the founding of the Turkish Republic in 1923, the monastery was abandoned due to the population exchanges between Greece and Turkey in accordance with the Treaty of Lausanne. Over the years, some treasures of the Sumela were carried out and damaged. Now it is open as a museum to visitors from people all around the world. On August 15, 2010, an Orthodox Mass was held for the first time within the majestic edifice – a first since 1923 – with the permission of the Turkish government. The cliff-face monastery is a site of historical and cultural significance and was included in UNESCO’s temporary list of World Heritage sites in 2000. Its appeal is not lost on its visitors, given that hundreds of thousands of tourists – both local and foreign – have historically come to marvel at it every year.

A monastery carved into the rock

The Sümela Monastery was built on the top of rocks atop of a hill on the banks of the Panagia river, 1,150 metres above sea level. Considered from the perspective of its natural surroundings it is in an extremely challenging area. The architecture of the monastery resembles that of the churches of Cappadocia. The Sümela Monastery consists of a rock church, chapels, kitchen, holy spring, library, guest house and students’ rooms and there is also an aqueduct which has been unearthed in a state of ruin. As you wander around inside, it is possible to see the traces of different cultures, especially from an artistic perspective. One of the most important features of the monastery is that the interior is covered in frescoes, and these murals tell three distinct periods. There are many enchanting drawings on the walls, from the figure of the Virgin Mary to the Disciples, from Adam and Eve to the creation.

Among the important parts of Sumela Monastery are student rooms, a library, a sacred spring of Orthodox Greeks, a guest house, a kitchen, a chapel and the main rock church. All elements are positioned in a broad area. At the side of the cliff is a large aqueduct of water supply. But some parts of the aqueduct are today in ruins. The path to the monastery entrance is through narrow and long stairs. And right next to the entrance gate are the guard rooms. From there welcoming visitors is the inner courtyard. Around the courtyard, influence of Turkish art is visible in the fireplaces, cells and closets of the rooms of the buildings. The inner and outer walls of the rock church and the adjacent chapel draw attention with their frescoes. The inner courtyard also has frescoes from the era of Alexios III. Frescoes in Sumela Monastery depict biblical settings.