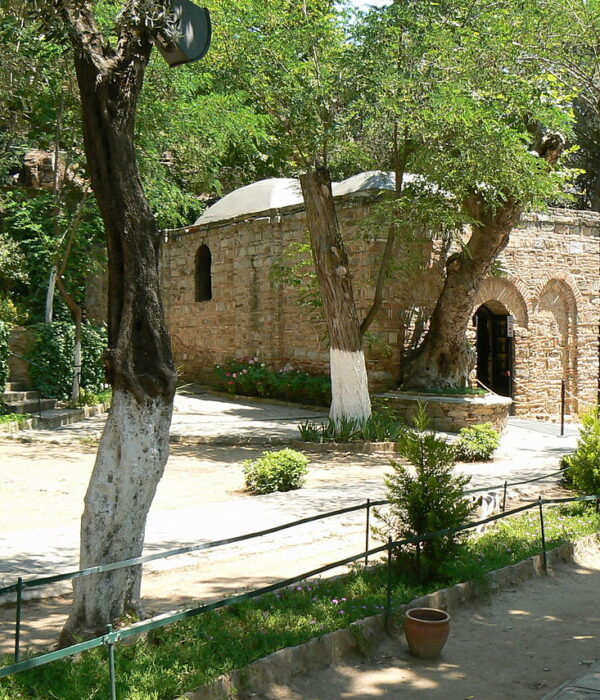 The House of the Virgin Mary

Ephesus has had a long tradition of being a center of religious pilgrimage. The earliest pilgrims arrived to worship the Anatolian goddess known as Kybele. Later, this deity merged with the Greek goddess Artemis and was venerated at the great Artemision, attracting the pilgrims from all over the Mediterranean region. These ancient cults of female deities were later echoed in the worship of St. Mary, mother of Jesus, that supposedly spent the last years of her life in Ephesus. According to this tradition, Mary arrived at Ephesus together with St. John and lived there until her Assumption (according to the Catholic doctrine) or Dormition (according to the Orthodox beliefs). The House of the Virgin Mary (Meryem Ana Evi in Turkish) which can be still visited today, is a place where, according to the beliefs of many people, Mary, the mother of Jesus, spent the last years of her life. However, similarly to the history of St. John, there are many questions and uncertainties regarding this location.

Pilgrims and tourists arriving at the House of St. Mary are greeted by a small statuette of Anne Catherine Emmerich and another statue of St. Mary. The statue of Mary at the end of the way of olive trees is a gift of a religious community in Izmir and dates back to 1867. It was placed in its current location in 1960 by Father François Saulais who was a member of Charles de Foucauld Order. He and Father Bouis were in charge at the House of Mary during this period. With high probability, the statue was inside the House of Mary between 1892 and 1914 before it was moved to its present location. In the grove to the south-east of the house, there is a rectangular atrium with a medieval water reservoir, discovered in 1964. Its shape resembles an oversized full-body font, and sometimes it interpreted as an indication of an early Christian use of the location as a baptismal place. The House of St. Mary is now a small chapel, with the statue of St. Mary where the faithful light the candles. This statue, placed on the marble altar, is a bronze cast iron statue of the Virgin of Lourdes. To the left of this oratory there is a storeroom, and on the right, a room supposed to be the bedroom of the Blessed Virgin with a bunk that was fixed to the wall, now called the Quran Room.

Where is the House of Virgin Mary?

House of Virgin Mary is located on the top of the “Bulbul” mountain 9 km ahead of Ephesus, the shrine of Virgin Mary enjoys a marvelous atmosphere hidden in the green. remote place rather than living in crowded place.

The entrance to the House of the Virgin Mary costs 35 TL. There are additional charges for entering the site by car and for the car park. The sanctuary can be visited every day, from 8:00 am to 6:00 pm (5:00 in winter).

There are no public transport options to get to the House of the Virgin Mary. If you travel independently, you need to rent a car, take a taxi, or walk the distance of 7 km from the northern gate of Ephesus, or 5.5 km from its southern gate.

Why would St. Mary live in Ephesus? The first hint comes from the Bible, where John the Evangelist explained that Jesus, during the crucifixion, declared his adoption as the son of Mary: “Near the cross of Jesus stood his mother, his mother’s sister, Mary the wife of Clopas, and Mary Magdalene. When Jesus saw his mother there, and the disciple whom he loved standing nearby, he said to her, “Woman, here is your son,” and to the disciple, “Here is your mother.” From that time on, this disciple took her into his home.” According to a tradition recorded by Irenaeus and Eusebius of Caesarea, John later came to Ephesus where he worked and finally died; it is assumed that he brought with him his adopted mother. These faint hints provided the basis for the early belief that Mary also lived in Ephesus with John. However, the evidence that St. Mary actually stayed there is not very strong, and there are much better indications that her permanent house was in Jerusalem.

Let us investigate the faint hints suggesting that St. Mary lived in Ephesus. First of all, there is no mention of this fact in the Bible. There are only much later pieces of written evidence, and there are no archaeological finds to confirm this claim. The earliest mention of the possibility that St. Mary resided in Ephesus can be traced to the synodal letter of the Council of Ephesus that took place in 431. This letter mentions “the city of the Ephesians, where John the Theologian and the Virgin Mother of God St. Mary [lived and are buried]”. Secondly, Bar-Hebraeus, a Jacobite bishop writing in the 13th century, related that St. John took Mary with him to Patmos, and then founded the Church of Ephesus. This could mean that Mary lived her final days on Patmos or in Ephesus, but the place of her death is not mentioned. In the 18th century, Pope Benedict XIV claimed that Mary followed St. John to Ephesus. He even intended also to remove from the Breviary the lessons which mention Mary’s death in Jerusalem but died before carrying out this intention.

Catherine Emmerich Visions and the House of Virgin Mary

A German nun, Blessed Anne Catherine Emmerich, who lived from 1774–1824, had visions of Mary in Ephesus, although she had never been in this area. Deeply religious, but born into a family of poor farmers, Emmerich, applied for admission to various convents. She was rejected multiple times because she could not afford a dowry. Finally, she was accepted by the Poor Clares in Münster, provided she would learn to play the organ. She took her religious vows in 1803, at the age of 29. Despite her weak health, she became known for the strict observance of the order’s rule. Emmerich was also a stigmatic as the wounds corresponding to the crucifixion wounds of Jesus Christ started to appear on her body from 1813.

Later in her life, Emmerich became bedridden, but her fame as a stigmatic and a visionary attracted many well-known visitors. One of them was a poet called Clemens Brentano, who interviewed her at length. He became one of Emmerich’s supporters at the time and wrote down the revelations she experienced. From 1819 until Emmerich’s death in 1824, Brentano filled many notebooks with accounts of her visions, including the scenes from the New Testament and the life of the Virgin Mary. Only nine years after Emmerich’s death, Brentano completed editing his records for publication. The first volume “The Dolorous Passion of Our Lord Jesus Christ According to the Meditations of Anne Catherine Emmerich” appeared in the press in 1833 and the second volume “The Life of the Blessed Virgin Mary” was published much later, in 1852, long after his death.

The House was destroyed by many earthquakes and not discovered until 1951 by local priests from Izmir thanks to a German nun, Catherine Emmerich, who saw its location in her visions even though she had never traveled to this part of the world.

Significance of the House for Christians and Muslims

Several popes visited the site. First, Pope Leo XIII blessed the House of the Virgin Mary during his pilgrimage in 1896. This blessing gave an early boost to the site as a pilgrimage centre and signalled a positive attitude of the Catholic Church towards it. In 1903, Leo XIII planned to send a papal commission to Turkey to investigate the site, but his death put an end to this initiative.

His successor, Pius X, received in 1912 the founder of the sanctuary during an audience. He inquired whether the tomb of Mary had been found in the meantime. Although this was not the case, he granted a group of visitors to the pilgrimage site in 1914 a complete indulgence of sins. In February 1921, a conference of the Pontifical Roman Seminary on the question of the admissibility of pilgrimages to the “House of Mary” took place in the Lateran with the participation of numerous representatives of the Curia. As a result of the expert discussions, the Austrian capuchin and biblical scholar Michael Hetzenauer coined the officially preferred language rule, according to which the assumption of a temporary residence of Mary in Ephesus was also possibly independent from the answer to the question where she had died.

Pope Pius XII gave the House of the Virgin Mary the status of a Holy Place and the Catholic place of pilgrimage in 1951, following the definition of the dogma of the Assumption. In this dogma, the Pope had decided not to specify the location of death and the ascension of the Blessed Mother. This privilege was subsequently confirmed and made permanent by Pope John XXIII. He had close ties to Turkey where he had been active as an apostolic delegate in the 1930s. He was also said to have visited the House of St. Mary on the occasion of the 1500th anniversary of the Council of Ephesus, celebrated in 1931. In 1960, he sent a special candle to the House of St. Mary for the Feast of the Presentation of the Lord and such candles are donated only to important Marian shrines. One year later, he granted a plenary absolution to Catholic pilgrims who visited the House with faithful intentions.

Pope Paul VI paid a visit in July of 1967. The main aim of his trip to Turkey was to better explain his thinking about the relations between the two primatial seats from Rome and Constantinople. Using the opportunity, he also went to the House of St. Mary and granted a plenary absolution to all the faithful who visited it. In more recent history, the House of the Virgin Mary was also visited in 1979 by Pope John Paul II, and in 2006 — by Pope Benedict XVI, during his four-day pastoral trip to Turkey. All three of these popes celebrated a holy mass at the place of pilgrimage.

Although all these papal visits have no dogmatic value, they show the religious importance of this site. Its international character has been continually increasing, and its the affluence sometimes takes a mass approach as, in some years, around 300 000 people visit the sanctuary. Pilgrims drink from a spring under the house, believed to have healing properties. A holy mass is held there every year for the Christian visitors on the 15th of August to commemorate the Assumption of Mary. Outside the temple, there is a kind of wish wall where the visitors make their petitions by tying a ribbon. This was originally a Turkish custom, but it is now imitated by tourists of all the faiths who attach pieces of cloth, paper, or plastic.

The site is visited and revered by Muslims as well as Christians. The House of the Virgin Mary has an enormous significance for Muslims, for whom Mary was the mother of one of the great prophets of Islam, called İsa Peygamber, i.e. Jesus. The main focus of Muslim visitors arriving from all parts of Turkey today, besides the sacred spring, is the so-called Quran Room, supposedly the bedroom of Mary. Its interior walls have been adorned with Quranic verses and Islamic symbols since the 1980s, while the rest of the building is dominated by Christian symbolism. In the understanding of many, even Turkish Muslims, the Qur’anic figure of the Maryam is a sublime and sincere woman who can intercede with God.