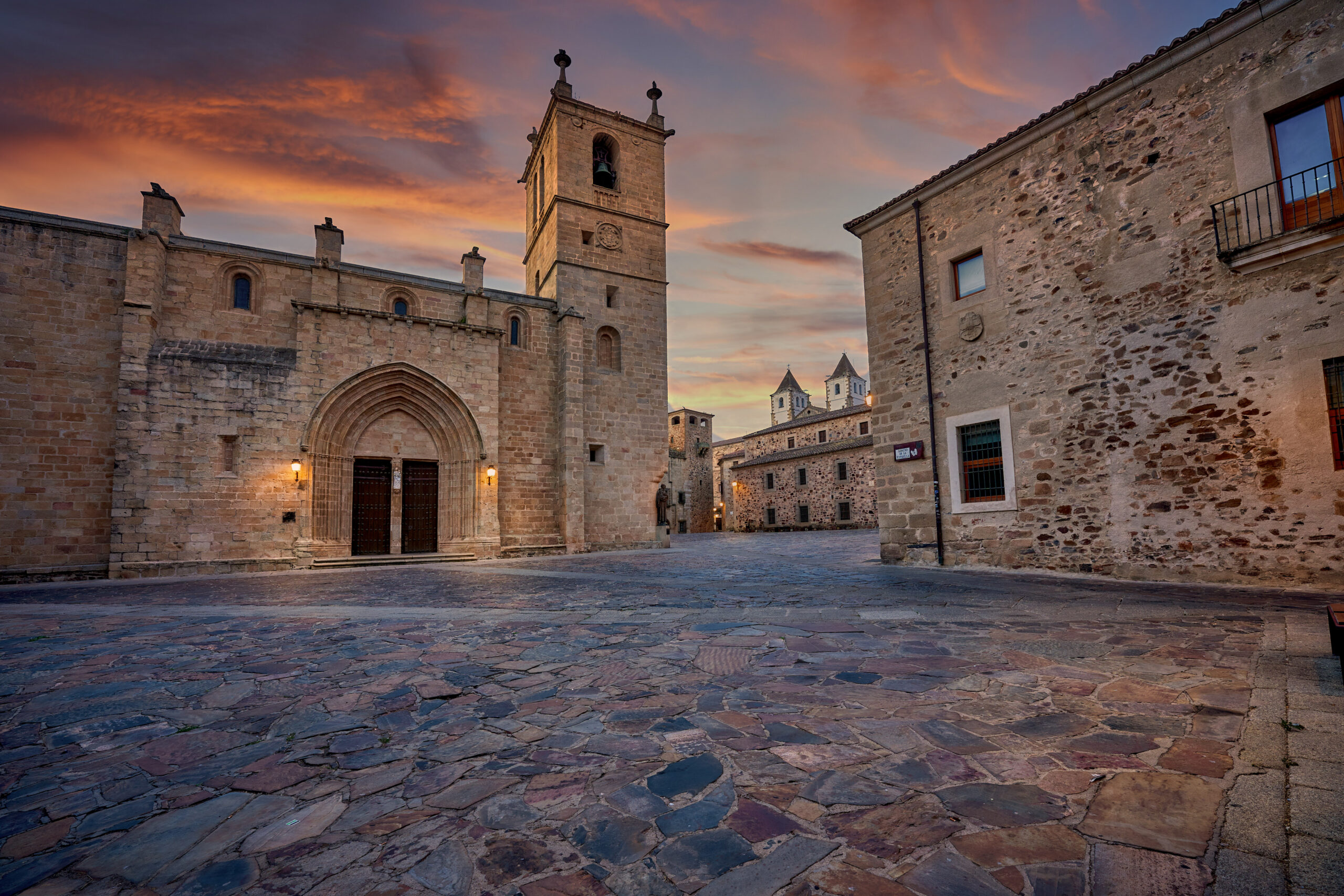 The traveller is filled with wonder as he steps through the Medieval city of Cáceres. Such a vast, intense city, always at his side. The eternal lights of Cáceres transfix you as they spill over the calm dawn. Peace descends as our steps transcend into the afternoon, tiptoeing into the nights of contemplative admiration. Cáceres gentles the soul and it’s sublime image is filled with magnificence.

The traveller is so captured by Cáceres, he embraces the spring shadow. A rainbow beam with shades of yellow, blue, orange, purple, red and grey oscillates with the beat that seeks and becomes life as the source of the radiance of Cáceres. The fascinating light reaches every corner and furrow of the area. He who ventures towards Cáceres is bewitched by the majesty and splendor of this wonderful city.

Whilst wandering in this historic moonlit city he will understand the magic of Cáceres and cannot fail to imagine the recreation of it’s opulence and perfection.

Walk then, holding back your feelings in the grandeur of the Medieval city. Such light over the Arabian wall, the ‘Adarve de la Estrella’, the ‘Plaza de Santa María’, the ‘Casa Mudéjar’, the ‘Cuesta de la Compañía’, the ‘Aljibe’, the ‘Palacio de las Veletas’ over the ‘Alcazaba almohade’, the ‘ Puerta del Postigo’, the defense towers with Christian and Arabian history, the ‘Arco del Cristo’ that oozes the flavour along the Roman wall, the ‘Foro de los Balbos’ where the gates were lifted in times of ‘La vieja Norba Caesarina’, the ‘Hospital de los Caballeros’, the ‘Balcón de los Fueros’, the ‘Iglesia de San Mateo’, the mosque where the bells scare off the fast flights of kestrel and swifts, a parade of stately homes from Cáceres, the ‘Judería’ with houses along narrow sephardic alleys and the neighborhood of ‘San Antonio de la Quebrada’ with a chapel over the synagogue where a dazzling light reverberates through the whitewashed homes. Streets with names like ‘Amargura, de la Gloria, del Mono, Callejón del Gallo, la Calleja del Moral, Rincón de la Monja’, wide squares, narrow alleys some hand cobbled  by the Moors of Morería…

One falls in love with Caceres’ s light, like a sacred stamp of life, encapsulating everything. Open to everyone, infinite, diverse, dappled and always as beautiful as the skies and landscapes we see in dreams.

He fills with the flavour and glow of Cáceres. Stretching to the limits of that beam of light, with a multitude of shades projected on its ancient walls, balconies, gates and twisted streets. Here he sits in one of many small squares typical of Cáceres, coloured gold by the intense burning sun. The granite, too hot to touch on these summer afternoons.

A reflection of images that repeats itself over and over again with this heartbeat searching for the light of Cáceres. Rising passions surrounded by the historic city walls consume his spirit as he gazes upon the lights of Cáceres. He who walks and  stops still in the presence of that clear beauty that seizes his heart, clings to the light of Cáceres and exults his soul. Under the beam where Cáceres sits, his eyes agleam with the luminescence, permeating over the city.

Cáceres is light! Genuine and unique to Cáceres. More alluring than any city, expanding to the root of that light. Beautifully illuminated by its Medieval spell.

With a wealth that always impresses. Yesterday, in the channels of history and its legacy amongst Jewish, Moorish and Christian roots. Today, meandering through Cáceres, winding along its alleys and squares towards the essence of Cáceres, this walled enclosure is a suburb of splendor. Tomorrow, like a sky of infinite lights, always in Cáceres the sacred rite and rhythm of its perpetual glow.

If you allow me traveller, not a single inch of Cáceres should be missed, every corner of the city, every segment of its light, each stone of the walls surrounding this enchanting place. Cáceres is listed as the third European monumental historic setting. Be born again in this absorbing street map and take advantage of the immensity of the light. Listen to the concert of silence and enchantment, penetrating from these huge stones and place yourself in the city, a meeting point between the Middle Ages and the Renaissance.

One Falls in love with Cáceres’ light like a sacred stamp of life, spilling over the open streets and squares. In the depth of my heart, that eternal light, infinite, diverse, dappled and always as beautiful as the fields, the horizons, the skies and the sacrosanct landscapes. Each and every one of the thousands of rays that converge and zigzag every second under the multi-coloured prism of beauty and mystery. The fascination for all the painted silhouettes of Cáceres forever with that resplendent light.

Such a special glow, within and over the city! Cáceres is burned into the soul and engraved on the heart of its people. A magnetic light for all who visit, like moths to a flame.

That unforgettable light always consumes the traveller within those sacred walls of that Medieval city of Cáceres.

The city of Cáceres, with more than two thousand years old, is a World Heritage Site, by UNESCO, since 1986, and the Third Monumental Complex of Europe. It is conformed as one of the most beautiful medieval urban complexes in the world, with a wide sample of palaces, churches, walkways, squares, alleys, noble houses, convents, defensive towers, viewpoints hermitages, opening, from the light, to the colorful, to tourism, to the most surprising fascination.

Founded by Cayo Norbano Flaco under the name of Norba Caesarina, after the passage of the Visigoths, it was conquered from the Muslims by King Alfonso IX in 1229. A wide sequence of arguments and prints, as it is framed in the pages of the history of Cáceres.

Today the city has 96,467 inhabitants, has a university campus, Official School of Languages, School of Fine Arts, Professional Conservatory of Music …

Cáceres is also part of the Caminos de Sefarad Networks, along the Vía de la Plata, which passes through Cáceres on its route along the Roman road between Gijón and Seville.

Tourism, based on the spell of its Historic-Artistic-Monumental City, represents one of the main axes of the economy. Reason why the city offers a wide and modern network of hotels, restaurants with typical local dishes, migas, chanfaina, caldereta, lamb stew, as well as establishments selling typical products, such as the famous hams, sausages and potato chips. , products derived from the Iberian pig, cheeses, such as Torta del Casar, artisan pastry sweets among which perrunillas, mantecados, pestiños and good broths, both red and white, stand out.

It should be noted that the Holy Week of Cáceres, of International Tourist Interest, proclaims, with a beautiful and extraordinary sensitivity, in its imagery, such as the cases of Jesus Nazareno and the Black Christ, from the mid-fourteenth century and others, in the depth of its processional parades and its routes. Mainly those that run through the historical-monumental scene of Cáceres, full of deep fervor, devotion and beauty.

Among the main events that take place in Cáceres, the Spanish Capital of Gastronomy in 2015, we can point out the annual celebration of the Womad Festival, of ethnic music, with interpreters from different parts of the world and with various stages in the Historic Center, the Musical Autumn, the Classical Theater Contest, the Medieval Market of the Three Cultures. The Bird Festival, The Pedrilla Concerts …

A wide network of museums, such as the Municipal, the History and Culture, the Guayasamín, the Yusuf Al Burch Arab house-museum, or the Holy Week Outreach Center complete a more than interesting offer.

And always the brightness, magic and splendor of the Light of the Medieval City of Cáceres … 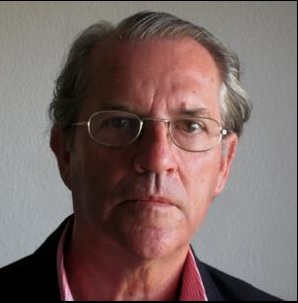 Native of Cáceres. Degree in Journalism from the Complutense University of Madrid. Parliamentary Chronicler on Spanish Television, director-presenter of the program "Parliament", and director of various Territorial Centers on TVE and the Program Production Center on TVE-Canarias. Collaborator in numerous media, deputy director of the magazine "Región Extremeña", author of the novels "Tierra de Silencio" and "El Rabadán de Extremadura", he is in possession of literary prizes such as the "Dionisio Acedo", from the Cáceres County Council, the "Martes Mayor", from Plasencia, that of the National Institute for the Conservation of Nature, and administrator of the blog "CACEREÑEANDO", as well as the distinction of "Extremadura of the Year", by Cadena SER. Journalist, writer, researcher, he tries to disseminate to the maximum and universalize the name of Cáceres, his city, a World Heritage Site and a Medieval City of extraordinary beauty.

A special thanks to the Official Portal Cáceres and David Díaz Pérez for the photographs.