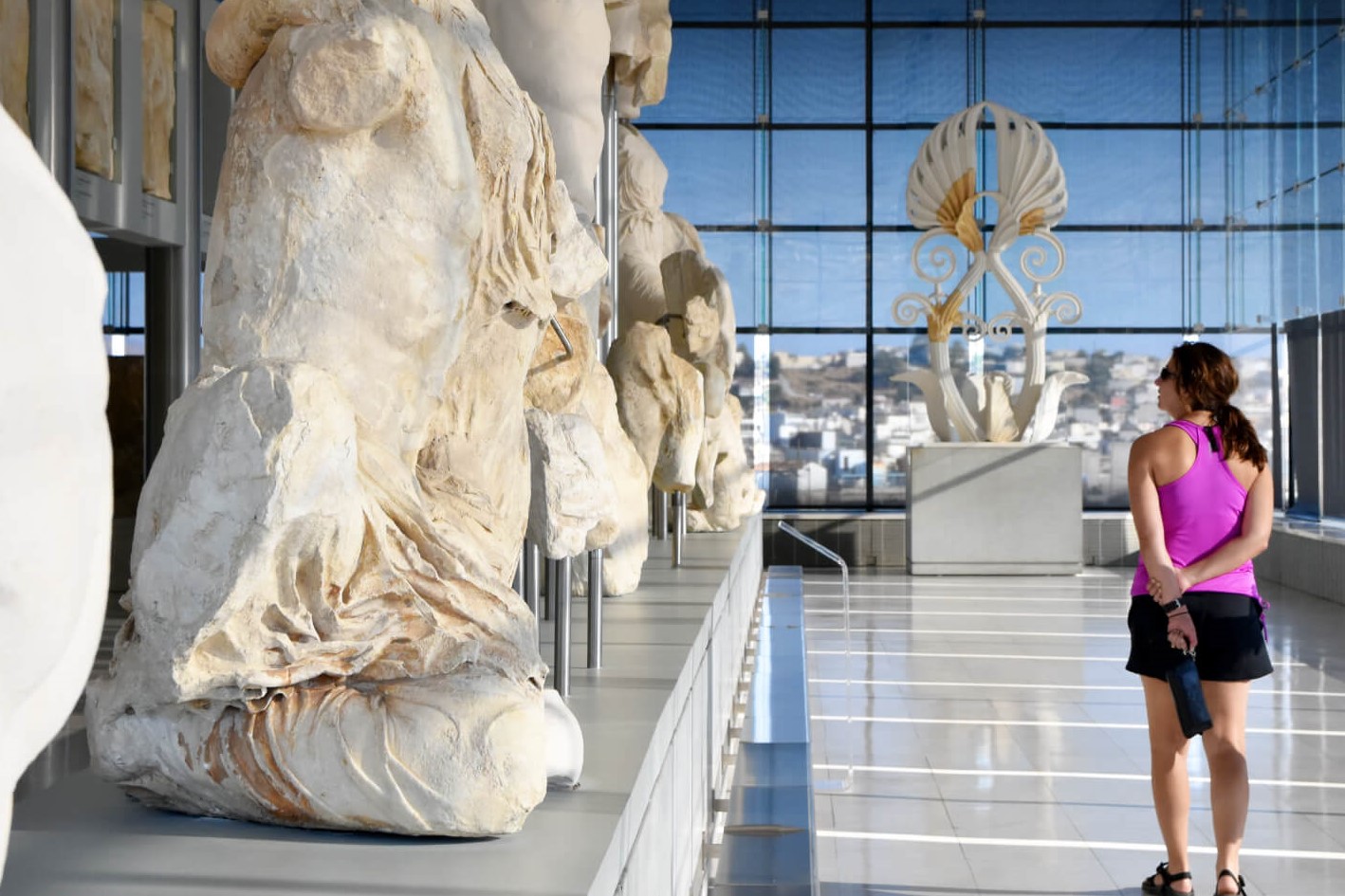 The sacred rock of the Acropolis

Athens Acropolis Visit : From wherever you catch sight of it in Athens, the Acropolis steals every bit of your attention. And with good reason for, just as it did 2,500 years ago, it continues to bear witness to an ever-changing city that carries the name of its most famous temple. A natural hilltop fortress for the first inhabitants, a place for worshipping the ancient gods, the centrepiece of the glorious reconstruction project of Pericles in the 5th century BC as Athens enjoyed its Golden Period… the Acropolis has seen it all. Civilisations and conquerors have come and gone (some adding to, some destroying the monuments of the Sacred Rock) and it’s still there. It has been a UNESCO World Heritage Site since 1987 and is an enduring symbol of the spirit, enterprise and culture that Greek antiquity gave to the world. To explore it is to discover a masterpiece of ancient architecture and artistry. What we admire today – together with the artefacts housed in the Acropolis Museum – is the work of the greatest craftsmen and engineers: The Parthenon (certainly the most recognised Greek structure worldwide) dedicated to the goddess Athena, the Erechtheion with its majestic female Caryatids holding up the porch, the Temple of Athena Nike… astonishingly feats of ambition. So whether you explore the museum on your own, or join a tour with an archaeologist (which is recommended), you’ll be rewarded. With each floor, your respect for a monument that is emblematic of Athens will rise.

What is the Acropolis?

The Greek words for “highest point” and “city” are Akron and Polis so the Acropolis is, or was, a city high above modern-day Athens. It sits on a huge flat rock 150m above sea level, in the middle of the city and is the primary monument of Athens, and one of the most recognizable in the world. The ancient citadel comprised many structures including several temples such as the famous Parthenon, two sanctuaries, several theaters, and innumerable statues, altars and meeting places. At various times it has been damaged, rebuilt, added to and occupied by foreign invaders including the Romans who built the Herodes Odean Theater and the Ottomans who constructed a mosque. At one point it was even the headquarters of the Ottoman army and its harem. Today it is regarded as one of the most fascinating and beautiful structures on the planet and is a must-do for all visitors to Athens.

When is the best time to visit the Acropolis?

The Acropolis is incredible to visit at any time of year, although spring and autumn will clearly have the best weather conditions. In saying that it is an outdoor attraction and as it rarely rains in Summer that does have an advantage. Summer can get very hot, however, not just due to the ambient temperature but also because of the reflection off all the pale surfaces, something you will find across Athens and many of the islands too. I recommend people visit the Acropolis either very early – around 15 minutes before opening time, so 7:45 am) or just before closing time around 5-6 pm ( or 3-4 in winter). This way you will avoid both the sun and the crowds which get particularly big when the cruise ship tours start arriving around Midday.

How to get to the Acropolis

The Acropolis is the major landmark of Athens and it is impossible to miss commanding center stage in the middle of the city and shining down on the suburbs surrounding it. If you are staying in the center of Athens it is likely you will be able to walk to The Acropolis or it will be a short taxi ride. There are public buses too and the Hop On Hop Off Bus stops near the south gate. The Acropolis has its own metro stop, Acropoli, which is very handy for the main Acropolis entrance to the west. However, both Thissio and Monastiraki stations are also close to the side Acropolis entrance as well, in the southeast. The main entrance, unsurprisingly, is the busiest and is also where big tour groups enter. We use the other one! It is possible to do a day trip from the airport if you catch the Metro in on the Blue line ( the only one from the airport).

The Elevator at The Acropolis

A lot of people wonder if The Acropolis is wheelchair friendly or indeed if anyone with a disability, limited mobility or even just the elderly can visit the Acropolis. Well, there is an elevator but it has had some issues over the year. Thankfully in 2020 a generous donation from The Onassis Foundation meant significant work was done on the elevator and surrounds that now means it is fully operational with new, flat pathways around the Acropolis that are suitable for wheelchairs. You can read more about it HERE.

For any updates or enquiries about the elevator, contact +30 210 3214172. Entry to the Acropolis for people with disabilities is free.

How to get tickets to the Acropolis

Queues at the ticket office, especially in Summer, can be significant, so it pays to be organized. Buy skip-the line tickets

Some visitors may be entitled to a 50% price reduction on tickets. This includes EU citizens over 65 years old and tertiary students from non-EU countries. You’ll need a valid ID to get the discounted entry to the Acropolis. Some visitors are entitled to free entry to the Acropolis including children under the age of 18 and students of EU universities, with a valid ID or passport. Check the official website for more information.

The Acropolis is open nearly every day of the year, with only a few exceptions.They are:

Note that the last entry to the Acropolis is half an hour before closing time.

Free days for visiting the Acropolis

There are several days per year where it is free for everyone to visit the Acropolis. It can be crowded on these days, however, that’s a big discount! The free days for the Acropolis are:

Points of interest at the Acropolis

Discover up close and personal why one of the greatest cultural landmarks of the world continues to emit a special energy over the city it has inspired for more than 2,500 yearsDionysus Sanctuary and the Dionysus Theater which is considered the most significant theater in Europe as it is where the very first theatrical performance was ever held. The Parthenon is considered by many engineers and architects as the most perfect structure every built. If viewed from the sky the Parthenon forms a perfect equilateral triangle with the Temple of Aphaea, on the island of Aegina, and the Temple of Poseidon, at  Cape Sounion. The Temple of Athena Nike was built around 420BC and is dedicated to the goddess Athena Nike, whom Athens is named for. It has a prominent position in the south west corner of the property. The Erectheion a temple on the north side that was dedicated to Athena and Poseidon. It is particularly famous for its Porch of Caryatids ( or Porch of Maidens) , six columns made from statues of female figures. Some of the originals of these can be found in the Acropolis Museum. The Propylea is the main gate to the Acropolis and was commissioned by Pericles after the Persian Wars. It consists of a colonnade and a number of structures leading up to the entry but was sadly never completed. The Odeon of Herodes Atticus theatre that was built between 160AD – 174AD and is still in use today. During the summers there are number of performances and events available . In June 2019 we had a wonderful night under the stars to see the Luxembourg Philharmonic Orchestra and Piano Virtuoso Yuja Wang. What an incredible and very special experience it was!

We highly recommend you combine your visit to The Acropolis with a visit to the new Acropolis Museum. Located at the base of the Acropolis near the main gate the new Acropolis Museum has a total area of 25,000 square meters, with exhibition space of over 14,000 square meters and is considered one of the great museums of the world. Not only is it home to all the fascinating artifacts and statues found in and around the Acropolis but it is also itself built over an excavation site of an ancient settlement which you can view and explore. Acropolis Museum hours align with The Acropolis itself. It is a stunning modern facility with some excellent shops and cafes all delightfully air conditioned, so this is a good place to visit in the heat of the day. Some people like to visit after they see The Acropolis, others before. That really is a personal choice.