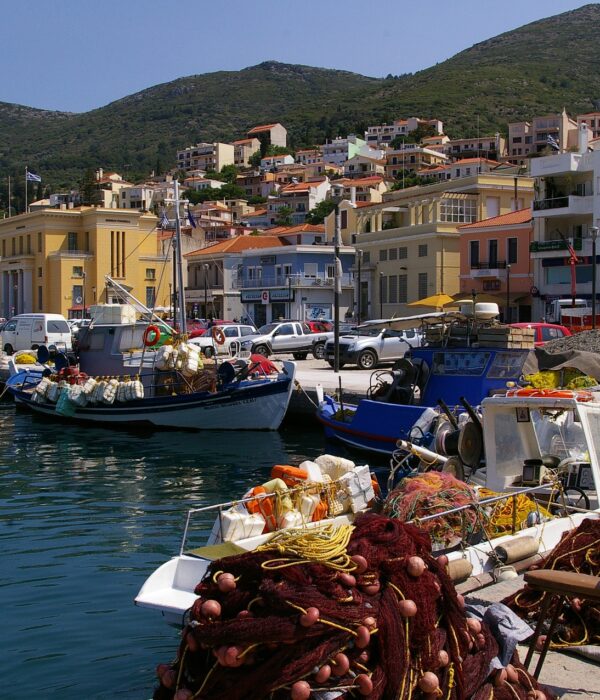 Samos Travel Guide  : Samos is surrounded by the clear blue waters of the Aegean Sea, just 4 miles from the coast of Turkey.  The Greek island of Samos is known for its rich history and more importantly said to have been the birthplace of Pythagoras (born: 570 BC), a mathematician who gave the world the Pythagorean Theorem.  Interestingly enough, Pythagoras wasn’t the only famous figure to have been blessed to be born on the island of Samos. Did you know that the philosopher known as Epicurus is said to have been born on the island as well? Epicurus was the founder of Epicureanism, a school of philosophy which states that to be able to achieve a tranquil state free from fear or bodily pain, one must only seek modest pleasures. Moreover, Greek mythology also points to Samos as the birthplace of Hera, the goddess of marriage and birth and Zeus’ wife. Aside from its diverse culture and history, Samos is an spectacular destination with everything you can ask for from white sand beaches, to mountains, and even forests. See other Greek Island Hopping options

Getting ready to plan your trip to the beautiful Greek island of Samos?

Where is Samos Island?

The hilly green island of Sámos (Map) (Turkish: Sisam) lies close to Turkey, from which it is separated by a strait only 1.9 kilometers wide. Fertile and densely wooded, it has only recently become a target for mass tourism and still retains the charm of its past professions, which revolved around farming, boatbuilding, and fishing. Samos is the site of one of the most important sanctuaries of the ancient world, the Heraion (Temple of Hera) on the southeast coast, which is now a UNESCO World Heritage Site. Other top tourist attractions include the nearby ancient harbor town of Pythagorion, named after the world-renowned Greek mathematician and philosopher Pythagoras (570 BC-495 BC), and the fishing village of Kokkari, with its colorful houses and laid-back ambience that is perfect for meandering around. Samos is also home to a number of pretty beaches like Lemonakia Beach, on the island’s north side just west of Kokkari.

According to archaeological excavations, it is believed that Samos was inhabited during the Neolithic years (3rd millennium BC). The first colonists of the island were the Pelasgians who worshipped Hera, the Phoenicians, the Leleges, and the Carians. Those colonists were succeeded by the Mycenaeans. Samos became a great power during the 6h century BC when it was ruled by the tyrant Polycrates who managed to turn the island into a huge naval power. Under its rule, the arts and sciences flourished and the Eupalinus Tunnel and the magnificent Heraion (Sanctuary of Hera) were built.

The history of Samos has been marked by some famous personalities, such as the astronomer Aristarchus, the first to argue that the sun was the center of the universe, the philosopher Epicurus, the fable writer Aesop and the famous mathematician Pythagoras. Samos honored Pythagoras by giving his name in one of the villages (Pythagorio village), a square in Vathi and there is also a cave on the island where Pythagoras is said to have hidden while tyrant Polycrates, his political opponent, was chasing him. During the Battle of Plataea (479 BC), the Samians helped Athens to win and then allied to it and returned to democracy. Samos also took place in the Battle of Mykale and, with the rest of the Greek navy, defeated the Persian fleet.

During the Peloponnesian Wars, the island was taken by the Spartans. Then it came under the rule of the Romans, the Venetians, and the Genoese. In 1453, Samos came under the domination of the Turks, along with the rest of the North Eastern Aegean Islands. The inhabitants of the island played an important role during the Greek Revolution against the Turkish yoke, in the beginnings of the 1820s. But the Great Powers gave the island back to Turks in 1830, making it semi-autonomous and being ruled by a Christian prince. This period is called Hegemony and was characterized by an amelioration of the fortunes of the inhabitants and by tobacco trades. Samos was reunited to the rest of Greece in 1912, after the Balkan Wars. Now its economy is based on tourism, agriculture, and fishing.

The Greek island of Samos is rich in natural beauty, culture, and history — in other words, you’ll be hard pressed to run out of things to see and do in Samos. Below, you’ll find a short list of some of the best things to do in Samos.

On the island’s south coast, the friendly little town of Pythagórion was known as Tigáni until 1955, when it was renamed to honor Pythagoras, who was born here. Built around a sheltered bay, now filled with fishing boats and smart yachts and overlooked by cafés and seafood tavernas, it was once the ancient port of Sámos, a powerful maritime and mercantile state in the sixth century BC. The remains of the ancient fortified port, with the ruins of Greek and Roman monuments, can still be seen. A small archaeological museum displays Archaic and Hellenistic funerary stelae (grave stones), marble statues, coins, and ceramics uncovered in the area.

On a hillside behind the town of Pythagórion stands the quaint white Monastery of Panagia Spiliani (Monastery of the Cave of the Virgin Mary) founded in 1586. From the entrance, 95 steps lead down into a large, cool, and peaceful cave, with a tiny church at the end, which is decorated with religious icons. From the monastery, you have amazing views down onto the town and across the sea towards the Turkish coast.

Lying eight kilometers west of Pythagórion is the Heraion, the Temple of Hera, one of the island’s top tourist attractions. A succession of temples was built on this site from the eighth century BC onwards, culminating with a colossal structure measuring some 45 meters by 80 meters, supported by at least 100 columns, which was begun around 570 BC. The structure was destroyed 30 years later in a Persian raid. A replacement was planned on an even larger scale, and would have been the largest Greek temple ever built, but it was never to be completed.  Today, the archaeological site around the Heraion includes altars and smaller temples, as well as the ruins of a fifth-century Christian basilica. Finds from the site are exhibited in the archaeological museum in Samos Town.

Once considered one of the Wonders of the World, this underground aqueduct lies two kilometers west of Pythagórion. Constructed by Eupalinos in the sixth century BC, it is one kilometer long and approximately 1.75 meters high and wide. Excavation started from both ends and met successfully in the middle, which is impressive considering this was before the advent of surveying and mapping. About 425 meters from the entrance, you can see the point where the two shafts met, making an almost perfect joint. It’s a very tight space, and is not recommended for those who suffer from claustrophobia.

In a sheltered bay on the island’s northeast coast, Sámos Town (also known as Vathy or Vathi) was founded in 1832 as the island’s purpose-built capital. Elegant Neoclassical houses rim the horse-shoe shaped harbor, many of which now accommodate waterside cafés and restaurants at ground level, while modern concrete apartments sprawl along the coast and up the hillside overlooking the sea. From here, regular ferries run to and from Athens’ port of Piraeus.

Housed in the former residence of the Prince of Sámos and a newer building opposite, this museum displays finds from the Heraion (Temple of Hera). The main hall was specially enlarged to accommodate the most sensational find, the colossal sixth-century BC marble figure, 4.8 meters high, of an Archaic kouros (athletic young man). The figure is possibly a votive statue from the Sacred Way. The torso was found in 1980 and the head (70 centimeters high) in 1984; the knee had been found 70 years earlier, in 1912. Other exhibits include Hellenistic and Roman sculpture, and prehistoric material such as pottery, ivories, and bronzes.

On the northwest coast, west of the port of Karlovassi, this small secluded pebble cove is one of the most stunning beaches on the island. The only way to reach it is by boat or on foot, which is part of the fun. It takes about 30 minutes on foot, passing through olive groves and pine woods, and once you arrive, you’ll find a lovely bay with amazing rock formations and crystal-clear sea. Wear comfortable hiking shoes and take plenty of water and something to eat-there are no facilities on the beach. Beyond Mikro Seitani lies Megalo Seitani. It is a large sand beach, which is also nice but not quite as pretty.

Kokkari is a former fishing village turned colorful resort town on the north side of the island just 10 kilometers from Samos Town. It has a long pebble beach with clear blue water that is especially popular with windsurfers. If you want to get in some exercise, don’t miss the eight-kilometer loop walking trail between Kokkari and the charming mountain village of Vourliotes. It takes you through groves of olive trees, and the walk is so beautiful, you’ll hardly notice you are climbing on the way out. Once you reach Vourliotes grab a bite to eat at one of the tavernas before heading back down the mountain to Kokkari

Mount Kerkis rises up 1,434 meters in the center of the southern portion of Samos and can be summited via a hiking trail. If you don’t want to go all the way up, there are plenty of other hiking trail choices on its flanks. The countryside around Mt. Kerkis also showcases a more tranquil and less developed side of Samos. Here, you’ll find just a few quiet fishing villages and only one proper resort area at Votsalakia (also known as Kampos). If you are interested in hiking up the mountain, head to this beach resort to enquire about the trails. While here, you can relax on its beautiful white-sand beach. Other beautiful beaches around here include the pretty and ultra quiet Psili Ammos Beach, which also hosts a number of restaurants serving fresh fish and other local fare.

Lemonakia Beach is within walking distance of Kokkari and is a popular spot for swimmers and sunbathers in summer. Just 100 meters off the main road, the pebble and sand beach has calmer water than other area beaches, making it ideal for swimming. The water is a clear, turquoise hue. You can gaze into it for hours on an umbrella-shaded sun lounger. Head to the small taverna right on the beach for food. Lemonakia can get crowded in summer. For less crowds check out Tsamadou Beach, which is within walking distance

Where to Stay in Sámos for Sightseeing

There are four main modes of transportation when it comes to moving around the island of Samos, Greece. You can rent a scooter, car, or you can take a taxi and/or ride the bus.

The weather in Samos is generally sunny with low precipitation and high humidity throughout the year. The summer season is from May to August, with late May to mid-June being the best time for water sports. If you want to avoid the crowds, the best time to visit Samos is the months of April and May or from late August to early September. Please note that the weather in Samos can get pretty hot in the months of July and August with the average weather reaching 94°F during the day and 77°F in the evenings.