When you book with an account, you will be able to track your payment status, track the confirmation and you can also rate the tour after you finished the tour.
Sign Up
159

Make your way across two continents and discover a vivid tapestry of cultures, customs, and cuisines on this enchanting journey through Spain and Morocco. In Spain’s historic capital of Madrid, discover dynamic history and culture. Travel to the Moorish city of Córdoba to encounter the religious marvel of La Mezquita. Journey to Granada and see the Royal Chapel. In Seville, learn about and experience the intensity of Flamenco during a Flamenco show.  In Morocco, discover , Fez, the “Mecca of the West,” learn about why this city continues to be called one of the holiest cities in the world. Discover Casablanca on a tour of the masterful Hassan II Mosque and see the city by night on a drive along the seashore before dining at Rick’s Café, the legendary saloon from the film Casablanca. Take one incredible journey through two countries where treasures untold are simply waiting to reveal themselves.

Pick-up and Drop off Time 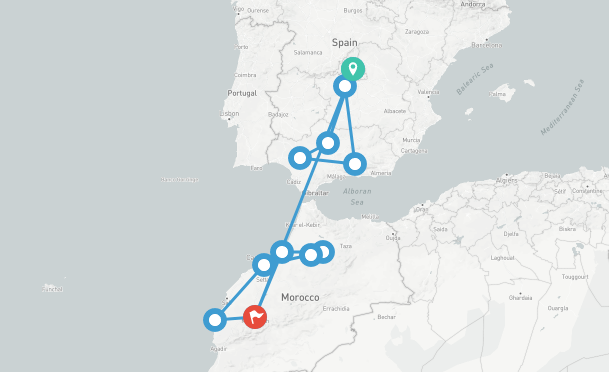 Upon arrival at Madrid, meet with our driver and transfer with our private vehicle to your hotel in Madrid city-center.  Overnight: Madrid Meals: Not Available

After breakfast you will meet our guide at 9:45 am by the statue of Francisco de Goya, just in front of the main ticket offices to the Prado museum. First of all we’ll visit this legendary gallery, home to some of the most important works of art in the world.

With a tour lasting an hour and a half, we’ll explore the main halls of the Prado Museum. Among the main works on display are “3 de Mayo en Madrid” by Goya, “the Meninas” by Velázquez and “The Garden of Earthly Delights” by Bosch. And you’ll also be able to see other works by masters such as El Greco, Rubens, Rembrandt, Sorolla and other greats in the history of art.

With the tour of the Prado museum over at around 11:30 am, we’ll take a walking tour around Madrid, a guided tour on which we’ll see some of the most emblematic spots in the Spanish capital, such as the Congress, the iconic Puerta del Sol and Plaza de Oriente.

The tour concludes at 1:30 pm in front of the Palacio Real. From here we’ll visit the inside of the stunning building, visiting its main halls, the most striking of which include the Throne Room, the Mirror Hall, and the Gaspari Chamber. Can you guess the number of bedrooms this palace, one of the largest in Europe, has?

Then at 3 pm the tour finishes in the Plaza de la Armería, by the palace.

After breakfast, drive southward along La Mancha, Don Quixote’s land. Brief stop at typical site in Puerto Lapice. Cross through the natural border of “Despeñaperros” and get into Andalusia, a region for itself that shows an enormous heritage from a splendorous past.Upon arrival in Córdoba, follow your guide on a fascinating tour of what was once the capital of Islamic Spain. Visit the Mosque–Cathedral of Córdoba, a UNESCO World Heritage Site and the old town. Explore the medieval Jewish quarter, a network of narrow alleyways flanked by white houses with its typical Andalusian patios and balconies full of flowers.  In the afternoon, after a short two hours ride reach Seville.

After a tasty breakfast, you’ll set off on a panoramic tour of Seville, one of the most-visited cities in Spain. Morning panoramic city tour visiting: the exterior of the Cathedral (the second largest in the Catholic world after St. Peters in Rome), Santa Cruz quarter (a natural scenario of “Carmen” as well as a precisely where the myth of “Don Juan” developed), Maria Luisa Park and Plaza de España. Afternoon at leisure for you to discover exclusive views, specific flavors of this active full of light city. Dinner and accommodation at the hotel. Optional Flamenco tour.

After breakfast, board the coach and head east to Granada, through the route of the Caliphate, the last bastion of the Nasrid Kingdom of Granada, observing an endless number of olive trees on the way to Granada and its incredible and amazing monumental environment, last stronghold of the Moorish Kingdoms up to 1492.

Upon arrival, you’ll walk through its charming, winding streets, and admire its many palaces, monuments and landmarks. And if there’s one thing you simply cannot miss it’s the 14th-century fortress built by  Mohammed ben Al-Ahmar.  You’ll visit one of the country’s iconic symbols, the renowned Alhambra and the gardens of the Generalife.

Breakfast at the hotel. Drive northward where it emerges, toward the sky of Castilla and surrounded by the Tagus River, the impressive Imperial city of Toledo –World Heritage City- where the three cultures Christians, Moorish and Jewish, have lived together. Resume of the Spanish art, history and spirituality the whole town is a National Monument. Short guided tour of this historical old town through its narrow streets. Then proceed with a visit to a famous “Damasquinado” (gold and silver inlaying in iron) factory. Continue to Madrid for overnight at your hotel.
Overnight : Madrid Meals: Breakfast

After breakfast, transfer to Madrid airport for a flight (included) to Marrakech. Upon arrival meet and greet by your driver and transfer to your hotel. Overnight : Marrakech Meals: Breakfast, Dinner 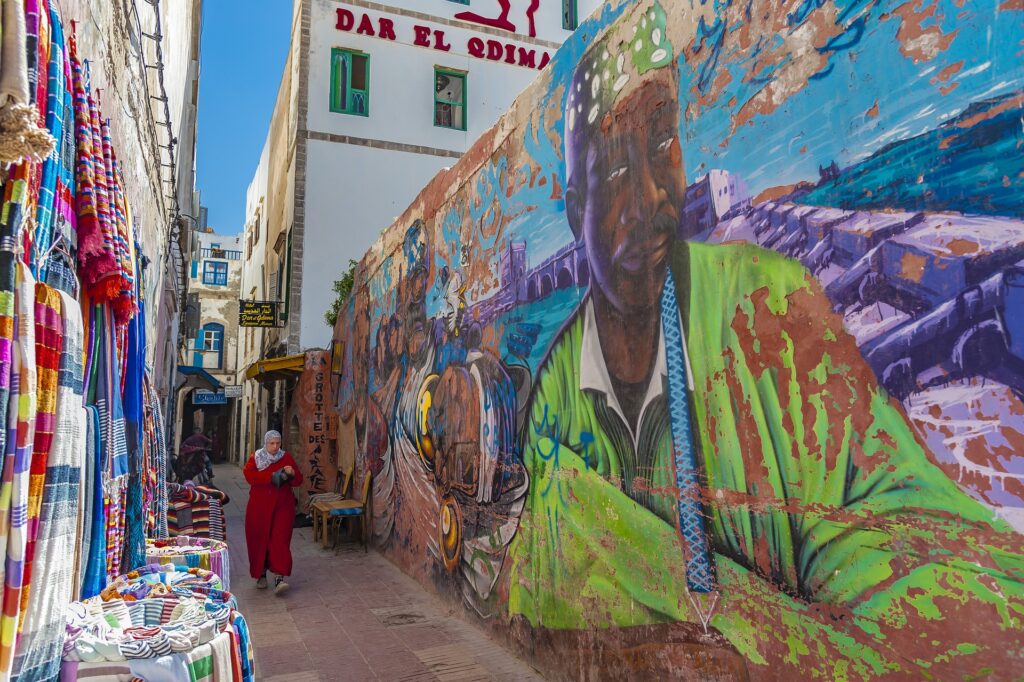 Early departure to Essaouira the Portuguese city anciently called Mogador. Visit of this city once known as capital of the hippies and which is full of Portuguese history as a harbour city with the most ancient fortified port in the world still preserved. Afternoon, departure to Casablanca passing by the Atlantic road, with stops in Oualidia and El Jadida. Orientation tour of El Jadida (built by the Portuguese and previously known as Mazagan “Mazagão”) with the possibility to visit the Portuguese Cistern.
Overnight : Casablanca Meals: Breakfast, Dinner 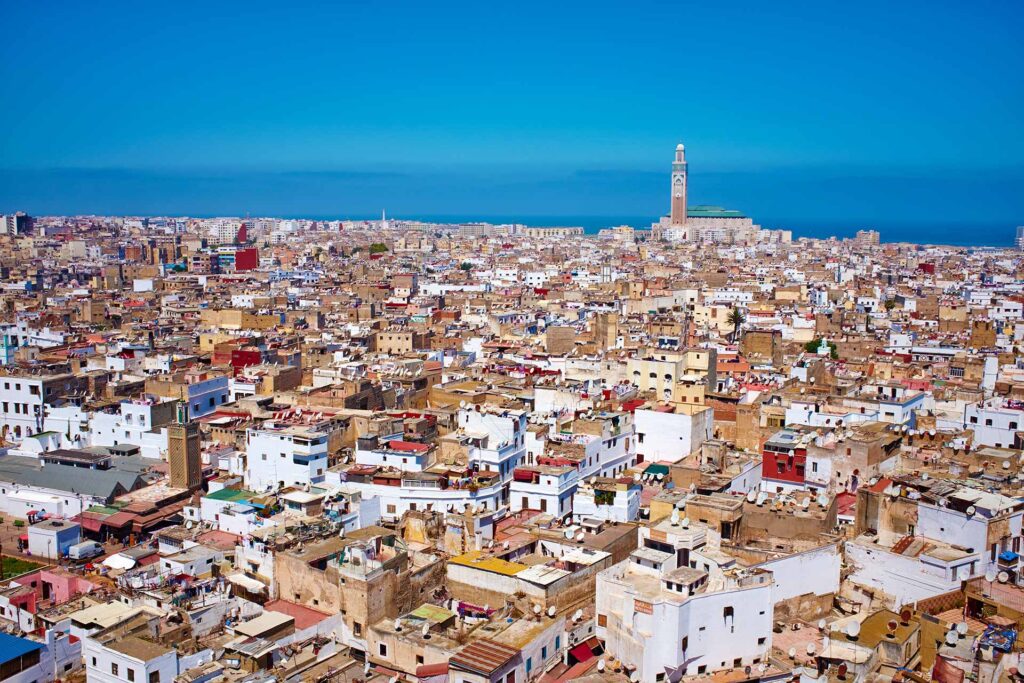 Short visit of the Economic Capital: the Habous district, the Royal Palace, the Mohamed V square, the residential area of Anfa and the outside of the Mosque Hassan II. Departure to Meknes. The visit Meknes, the Ismailia capital with the longest ramparts in Morocco (40 km) that includes the famous Bab Mansour gate, the Royal Stables and the Jewish quarter. Departure to the holy city of Moulay Driss (panoramic view) and visit the Roman ruins of Volubilis. Then Continuation to Fez. Overnight : Fez Meals: Breakfast, Dinner

The whole day is devoted to the visit of the spiritual capital : the Medieval Medina and its souks, The Royal Palace, Attarine or Bou Anania Medersa, Nejjarine fountain and the outside of Moulay Idriss mausoleum
and Karaouine Mosque. Overnight : Fez Meals: Breakfast, Dinner 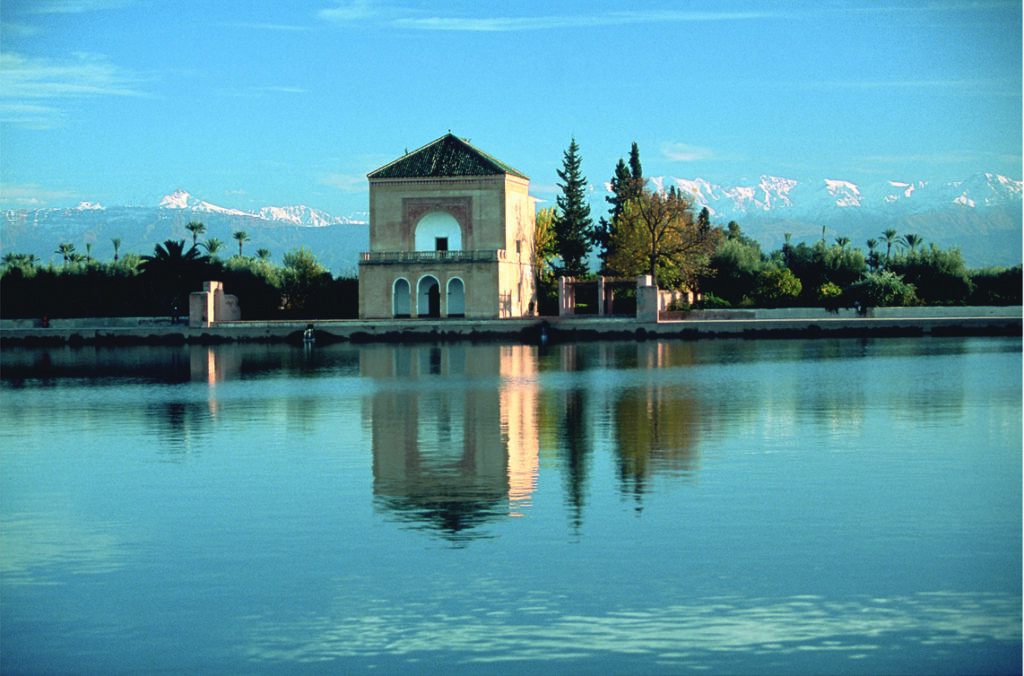 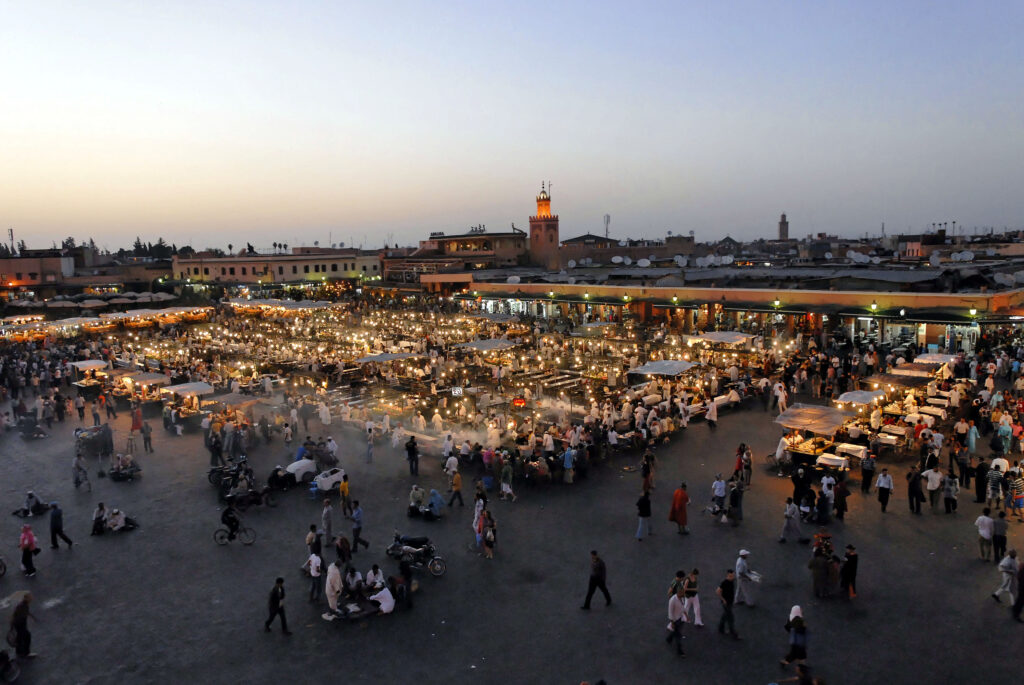 After breakfast, transfer to the Marrakech airport according to your flight schedule. End of our services