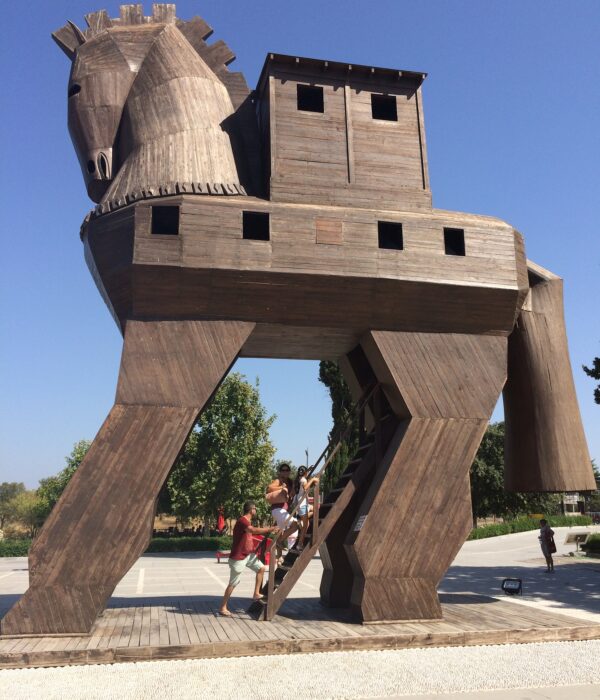 Did the Trojan Horse exist?

Trojan Horse of Troy : The tale of the Trojan Horse is one of the most frequently told stories from the mythical Trojan War. It tells about the trick employed by the Greeks who were tired of besieging Troy for a decade. Cunning Odysseus, the legendary king of Ithaca, suggested building an enormous wooden horse. When the construction was ready, the elite of warriors hid inside, while the remaining Greeks pretended to sail away, bored of the war. The jubilant Trojans wheeled the horse into the city and started the celebrations. Undercover of the night, the Greeks sneaked out of the horse, opened the gates of Troy, and the Greek army entered the city, destroyed it, and killed its inhabitants.

The fundamental question arises after hearing the tale of the Trojan horse: why would the Greeks build a model of this animal and not another? There are many interpretations of the story. The most straightforward explanation is that the horse was the emblem of Troy, so the Trojans willingly accepted such a gift. Another speculation states that the horse was a battering ram, such as used at the time by the armies. These devices were covered with wet horse hides to protect them from fire. The horse could also be a ship with the hidden warriors, as ships were called sea-horses, for instance in the Odyssey.

Finally, a more complicated theory states that the Trojan Horse of Troy did not exist in any material form but was a metaphor for an earthquake that destroyed the walls of Troy, letting the Greeks inside. This speculation is supported by the fact that Poseidon was not only the god of the seas but of earthquakes and horses too.

The modern wooden replica of the Trojan Horse was created in 1975 by the Turkish architect İzzet Senemoğlu. It is possible to get inside the horse and climb up to its two levels. There are windows on both of them, offering an overview of the site. The model of the Trojan Horse, 12.5 meters high, was built of 25 cubic meters of pinewood, brought from the Kaz Mountain. This mountain, in ancient times known as Mount Ida, is situated some 50 km to the south-east of Troy. It was the setting of several important episodes of the Trojan War. It was also the place where the Olympian gods sat and watched the progress of the epic fight. Another model of the Trojan Horse, used in the filming of the movie “Troy” from 2004, stands on the quay in the city of Çanakkale, the main base for the tours of Troy.

Go through the entrance to the archaeological site of Troy, situated next to the ticket office. The main sightseeing route goes straight on, but you can see the model of the Trojan Horse standing on a square, slightly to your right. At the square, there is also a toilet, the only one at the whole site, as well as the official museum shop where you can buy souvenirs, maps, and books devoted to Troy and other archaeological sites in Turkey.

Join our day excursion from Istanbul