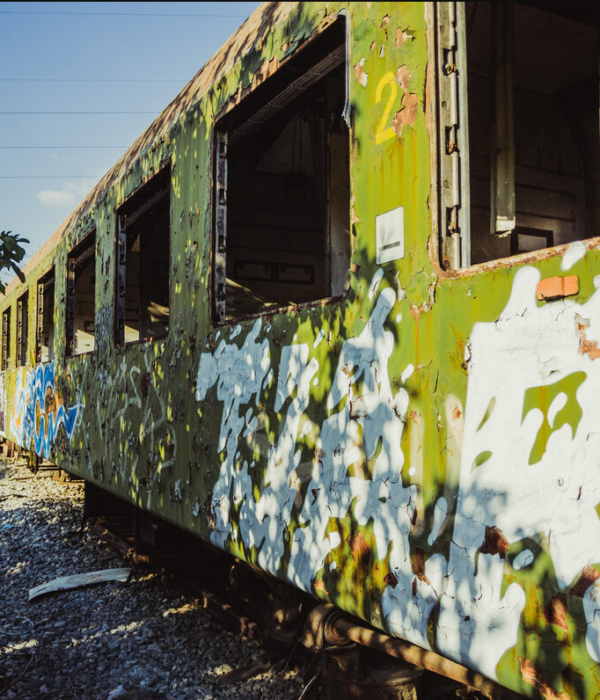 Unusual Attractions in Thessaloniki – Known as the megalopolis of northern Greece, Thessaloniki is filled with ancient monuments, landmarks, and museums. But Greece’s second city is also home to a plethora of bizarre, unusual and underrated sites, which also deserve to be explored. Buckle up, we are taking you on a virtual tour of unusual and alternative things to visit in Thessaloniki.

Gardens of the Pasha

Pasha Gardens is a forgotten green park near Thessaloniki’s old town (ano poli), a part of the city where remnants of Ottoman-era architecture can still be seen. Tucked behind the Agios Dimitrios hospital, it is a little-known green oasis, and also one of the city’s most mysterious places. The park is dotted with unusual, half-ruined stone structures. This imaginative, Gaudí-style architecture centers around an ornate fountain encircled by a tunnel leading nowhere. There is also a cistern to collect rainwater, a seating area, and a small gate leading underground. Mysterious shapes and symbols can be found throughout.  The area swirls with a unique spiritual and mystical energy. The architect is unknown, and there are several theories about the history of this place. Some say it was a meeting place or initiation temple for Ottoman freemasons, specifically the Sufis, or Muslim mystics. Some believe the park was first created by Sephardic Jews. And yet others suggest it was once part of the city’s catacombs. According to an inscription on one of the walls, the structures were created in 1904.

Located in town of Nea Chalcedon is an ancient graveyard, that has long since been pillaged for riches, but is still home to a beautiful collection of stone crosses established by a gnostic Christian sect.  The Bogomils were a European gnostic cult that survived up to around the 16th century. They followed the dualist belief that the world was in constant, even contention between God and the Devil. According to their beliefs God held dominion over the spiritual world, while Satan’s power lay in all things physical and material. They practiced all sorts of rituals involving dancing, fasting, and such, revering their own bodies as temples, which also kept them from building churches. During the life of their cult, the Bogomils could mostly be found in the Balkans and near Serbia. However they did send out groups of missionaries.

The train cemetery of Thessaloniki, located in the suburb of Nea Ionia, attracts curious visitors and photography enthusiasts who enjoy taking pictures of the decaying trains. In this graveyard lie over 1,000 decommissioned trains, some of which have been stranded for over 30 years. The place is eerie and quiet, and offers quite a spectacle as nature has gradually invaded the space.

In Thessaloniki, everyone you cross paths with will tell you that the house on 263 Vasilissis Olgas Street is haunted. Rumor has it that screams and strange noises can be heard at night, and that anyone who has tried to live in it, or even demolish it, has come to a mysterious end. Vasilissis Olgas Street was once one of the most elegant areas of the city, where many aristocratic families lived. It is bordered by a collection of meaningful historic buildings, including the Haunted House, built in 1919. But even before its construction was complete, the second floor collapsed twice for unexplained reasons. Countless stories surround the Haunted House, which makes it a fun landmark to visit. Many tour operators, including organize tours of the house, some for free.

In Thessaloniki, one monument embodies the architecture and culture of the city. It carries the memories and aromas of the old Ottoman era as well as the fresh flavors of today’s fine arts. Today, Bensousan Han is a hot spot for the creatives, but it also speaks to over 200 years of local history. Once entering the foyer, the senses are caught by the abundance of color, shapes and textures of all the curiosities lushes all over the place. The building was constructed in 1810 on behalf of Samuel Bensousan, a local merchant, and elements from that period are still visible at the lower levels. The cellar held goods, the basement held livestock. The upper floors were used as affordable dormitories for travelers and merchants. All of the rooms are organized around an octagonal entrance hall, creating a connected space. More recently, a group of artists took over the space. They revitalized the building, bringing in theatrical props and vintage furniture and creating a revolving “Prop Gallery” on the ground floor. The space is used for events put on by local and international companies, including theatrical performances, readings, and exhibitions. Bensousan Han is part of the creative movement of the present as well as an example how to reuse the architectural heritage of Thessaloniki.

Ancient brothel of the Roman Forum

The bath includes a circular room with twenty-five bath tubs, heated pools, and a circular sweating room similar in operation to a modern sauna. The brothel operated in a two-story building next to and in direct communication with the bathhouse, with a dining room on the ground floor, and pleasure rooms on top of it.  The findings from the brothel, vases of clay and glass, a large penis-like alabaster vase, jars with penis-like mouths, even parts of a sexual aid with a hand-driven pulsating shaft, were once exhibited in a special “adults only” room of the small underground museum constructed as an extension to the forum’s cryptoporticum, but aren’t visible anymore. The baths and brothel complex dates from the second century BC, and it was destroyed by fire, probably as a result of an earthquake, in the last quarter of the first century AD.

Book your short stay in Thessaloniki