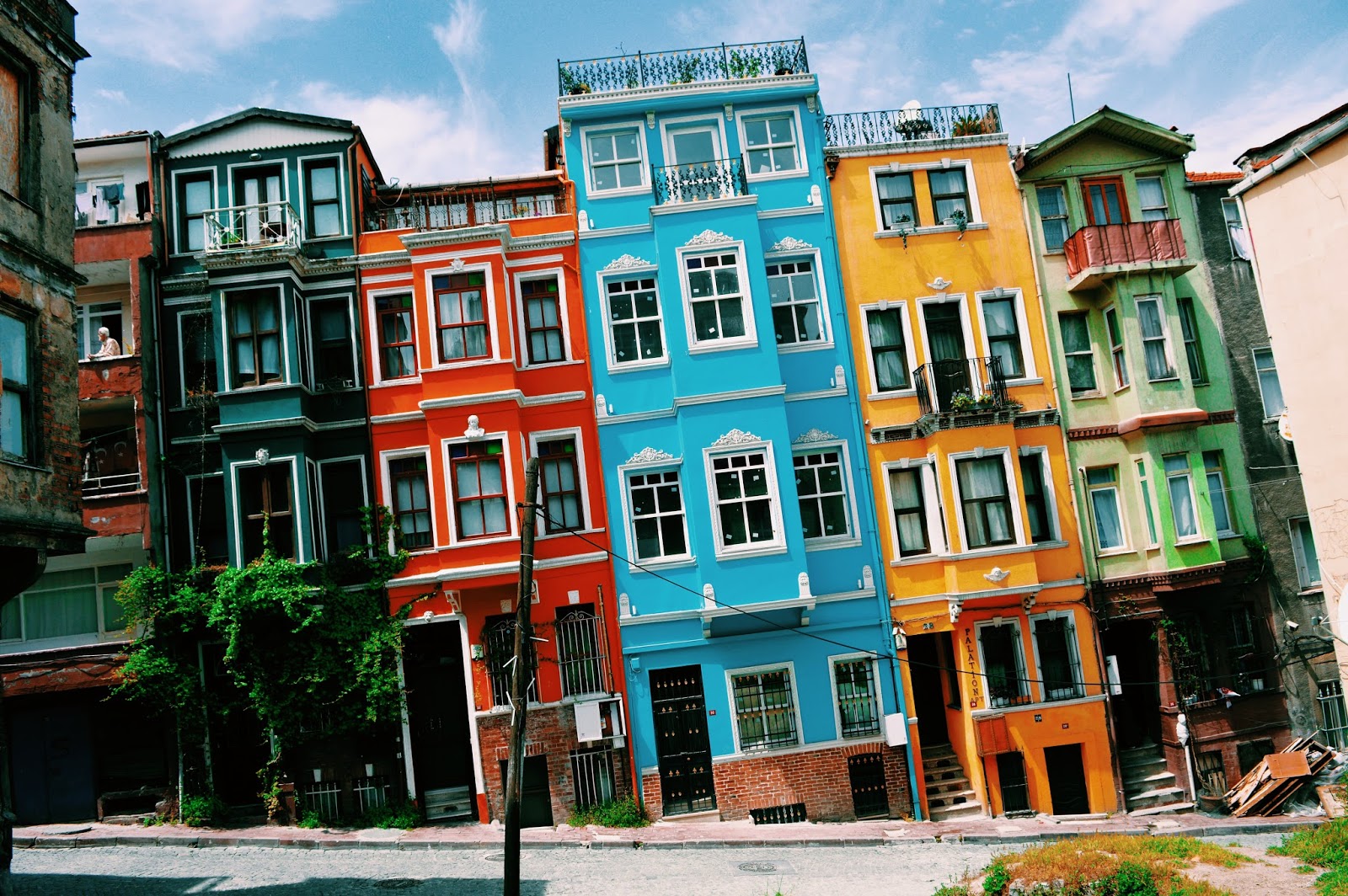 Best places to take a selfie in Istanbul

Best Places To Take A Selfie In Istanbul – Selfies have become an essential part of travel, and as a result they’ve become an equally essential part of Istanbul! It’s now considered the ultimate travel photo, and you’ve got to show just how incredible your trip is across Instagram, Facebook, Twitter and every other social media platform. While you’re here in the Eternal City, you want to get the best shots and selfies just as much as you want to experience the sights and sounds of Istanbul.  You get to go to the perfect photo-op spots (designed specifically for taking selfies), and get there at the best time of day, with the best lighting! It’s about time someone invented a tour designed specifically to get you the best selfies, because a lot of other tours simply don’t give you the time to do that … so were proud to offer such a unique option here on Eskapas to develop your photography talent!

Show just how epic your trip to Istanbul was with selfies from these spots!

This tower was built in the 14th century by the Genoese and has played an important part in Istanbul’s history ever since, and more importantly an important part of Istanbul’s skyline ever since! This was once the highest point of the city, and is where famously Hezarfen Ahmet Çelebi used artificial wings to “fly” across the Bosphorus.

Looking for the best views over the Golden Horn? Well there’s no question where they lie – right here, at the top of Pierre Loti Hill where you can sip a Turkish tea and take a selfie with the entire historic peninsula as a backdrop to your shot! The hill was named for the well-known French novelist Pierre Loti, who loved the city and this view in particular.

Çamlıca represents one of the highest views in the city, and features two hills overlooking the Bosphorus and the Marmara Sea. There are no many pavilions and summer palaces to relax on and get a bite to eat as well as sip a Turkish tea before you take that perfect selfie from one of the most prominent places anywhere in the city.

The scenic Cicek Pasaji neighborhood is in Beyoglu. The area features a high-end indoor and outdoor marketplace filled with cafés, restaurants, taverns, shops, food markets, and (not surprisingly) flower vendors.  Built in 1876, Çiçek Pasajı (Flower Passage) is easily one of Istanbul’s most beautiful arcades and its gorgeous interior is worth a stroll through, even while the waiters valiantly attempt to shuffle you into the beer halls and meyhanes lined along the sides. Though the Beyoğlu area offers much better dining spots, the beautiful setting of Çiçek Pasajı makes its worth it to sit down and enjoy a beer with some french fries while soaking in the nostalgia.

Balat is known for its colorful historic homes and quaint cobbled streets. Climb to the top of any of Balat’s maze of streets and take a selfie overlooking the colorful homes with the Golden Horn behind you for an iconic Istanbul shot.

Every spring the park is a center for the city’s tulip festival, with every color of tulip imaginable planted in beautifully decorative arrangements. Take a selfie from the top of the hill with the Blue of the Bosphorus in the background and a beautiful flower arrangement in the foreground!

Ortaköy marks one of the most pretty districts anywhere along the Bosphorus, and the view of the bridge to the Asian side of the city in the background with the Ortaköy Mosque, officially the Büyük Mecidiye Camii, right up against you is one of the most breathtaking views you’ll find anywhere in the city.

This is one of the more secret selfie spots in the city, but ultimately it’s still maybe the best. Climb up through this secret passageway right up to the top of the Historic Peninsula and find yourself all alone on a rooftop with the whole city before you! Most tourists don’t know about it so keep it a secret before you post the best selfie anyone’s taken in the city on Instagram and show the whole world!

This stunning Byzantine Cistern has played host to numerous films, James Bond included, due the mystery it evokes and the beauty of its caverns. Take a shot with the perfect shadowy lighting to show just how deep and dark into the pit of Istanbul you’ve explored!

Whether you’re taking a shot of yourself in front of spices, ceramics, carpets, wedding dresses, or anything else under the sun, “the oldest shopping mall in the world” is definitely a spot for a Selfie you’ll find nowhere else! Wander through the maze of this giant bazaar until you find the spot that looks perfect just for you!

You’ll have to take a boat out to this one, but it’s totally worth it! Take the boat right out to the Maiden’s Tower, now a restaurant/café, and take a selfie right in the middle of the Bosphorus from one of its most iconic history spots!

Arguably the most famous building in the world, a shot from inside the Haghia Sophia or outside puts you right in the heart of Istanbul UNESCO World Heritage historic peninsula and in a 1,500-year-old masterpiece!

Probably the most lovely street in karakoy is the famous Umbrella Street or Şemsiyeli Sokak -as Turkish people call it- where everyone is taking pictures. Its original name is Hoca Tahsin Street but people call it the Umbrella Street because of the famous colorful umbrellas hanging from an upper net making it look like a lovely colorful street from one of Disney movies 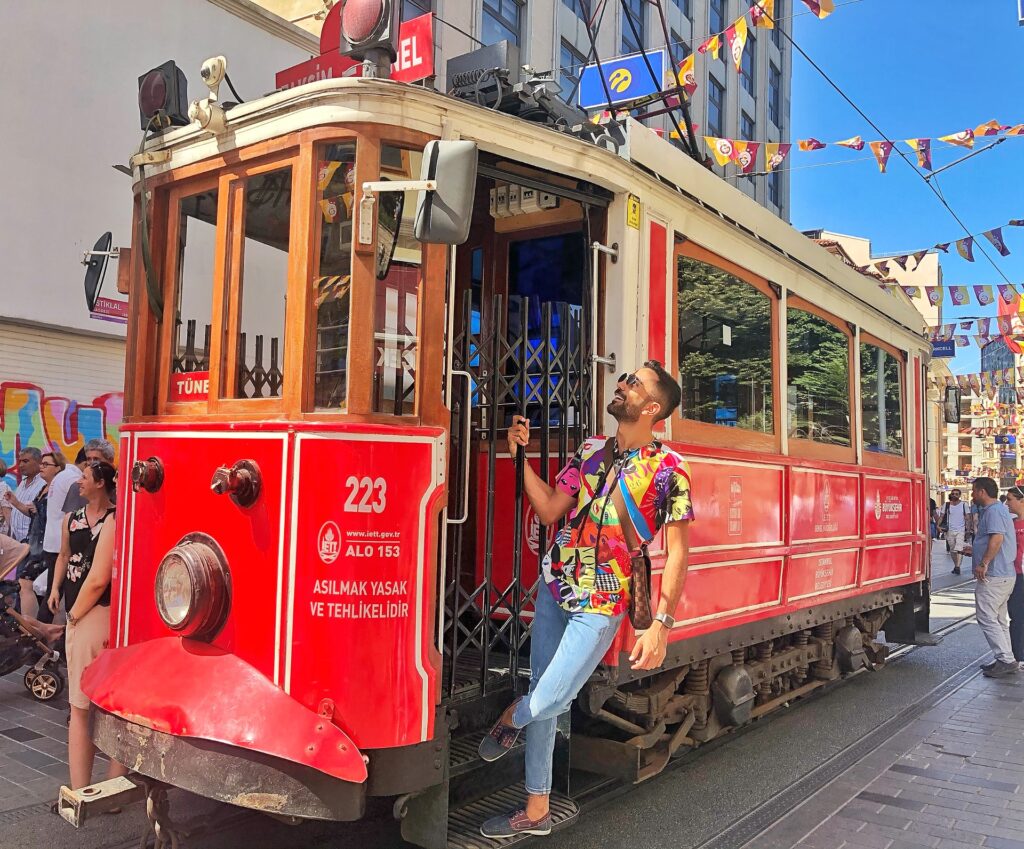 This avenue is the beating heart of the city, and whenever, wherever you take your shot from you’re sure to find hordes of people on all sides of you with Beyoğlu’s classic Victorian architecture in the background.

The Courtyard of the Blue Mosque

The Sultan Ahmed Mosque, popularly known as the Blue Mosque, is one of the city’s best-known landmarks. Built between 1603 and 1617 by Sultan Ahmet, the Blue Mosque was the first built outside of Mecca to be constructed with 6 minarets. Now a UNESCO World Heritage Site, its nickname is derived from the hand-painted blue Iznik tiles that adorn the interior. While the inside of the Mosque is stunning and well worth a visit in itself, most Instagram shots are taken in the courtyard of the mosque, the largest of all the Ottoman mosques. As the Blue Mosque is one of Istanbul’s busiest tourist attractions, I recommend arriving early to achieve the perfect photo without too many people in the background. We don’t recommend inside.