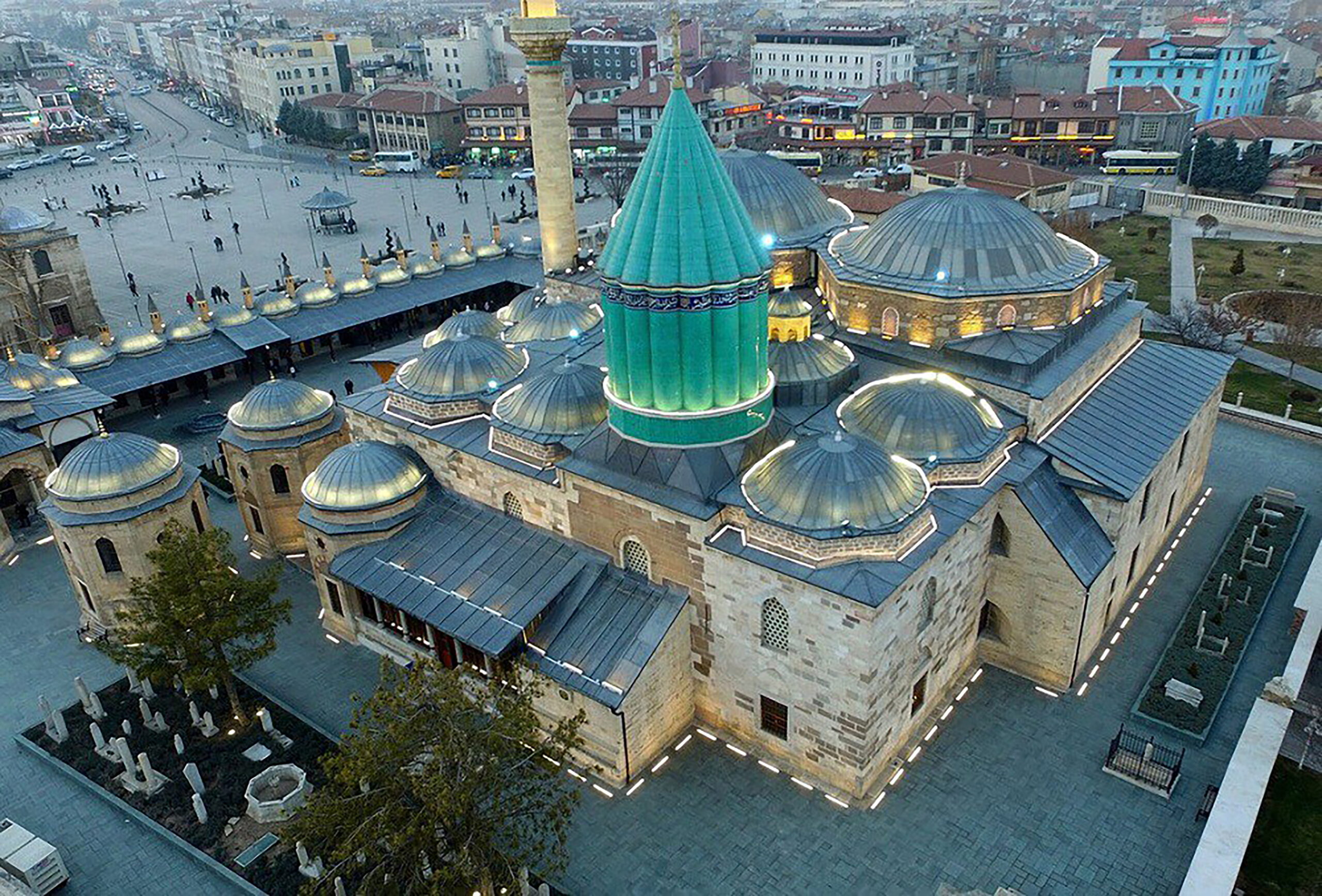 Mevlana Museum (Map) – Konya’s iconic sight is the distinctive green conical dome above the tomb of 13th-century philosopher, poet, and religious leader Mevlana Celaleddin Rumi. Right in the center of town, this mausoleum and attached historic tekke (lodge) of the world famous whirling dervish sect of Sufism, which Mevlana Rumi founded, is the city’s main sightseeing attraction. Today, it’s the Mevlana Museum, and both pilgrims and tourists flock here to pay their respects to one of Turkey’s-and the world’s-greatest religious mystics.  Read more about Whirling Dervishes and their ceremony.

Although most famous outside of Turkey for his poetry (including his renowned 25,000-verse Mathnawi poem), for believers, Mevlana Rumi is revered as a saint, and his mausoleum is a holy place. His words, preaching tolerance and acceptance, have echoed down through the centuries. With one of his most famous verses stating: “Come, whoever you may be. Even if you may be an infidel, a pagan, or a fire-worshipper, come. Ours is not a brotherhood of despair. Even if you have broken your vows of repentance a hundred times, come.”

The tekke’s present layout dates from the 16th century, long after Mevlana‘s death. The only part of the lodge that dates from the 13th century, when Mevlana lived, is his mausoleum. You enter through a gate and an impressive garden filled with fountains, roses, trees, and tombstones.  Inside the mausoleum is not just Mevlana’s sarcophagus (engraved with his words: “Do not seek our tombs on this earth-our tombs are in the hearts of the enlightened.”) but that of his wife Kerra Hatun; his children Melike Hatun and Müzafferüddin Emir Ali Çelebi; plus the tombs of six dervishes, the so-called “Soldiers of Horasan,” who came to Konya from Balkh with Mevlana.

In addition, the large complex houses a huge collection of artifacts belonging to the Mevlana Order: valuable carpets; metal and wooden objets d’art; and books, including a display of priceless Qur’ans. The small museum, which takes up part of the space in the Semahane, exhibits a fine selection of these items. The museum also has a library with more than 1,700 manuscripts and 500 books. Outside is a tranquil courtyard with a marble fountain (1512). Across the courtyard from the mausoleum are a series of cells, where students of the Mevlana Order once lived and studied. Today, they house an interesting collection of objects related to dervish life, from clothing and textiles to calligraphy and musical instruments. For tourists wanting to dig a little deeper, excellent information boards allow a deeper understanding of Sufism’s history and culture.

A recent addition to the Mevlana Museum, the rose garden in the museum grounds now holds a whirling dervish performance on Thursday nights during summer (roughly June to September).  You can also have chance to see their performance in Istanbul and in Cappadocia.