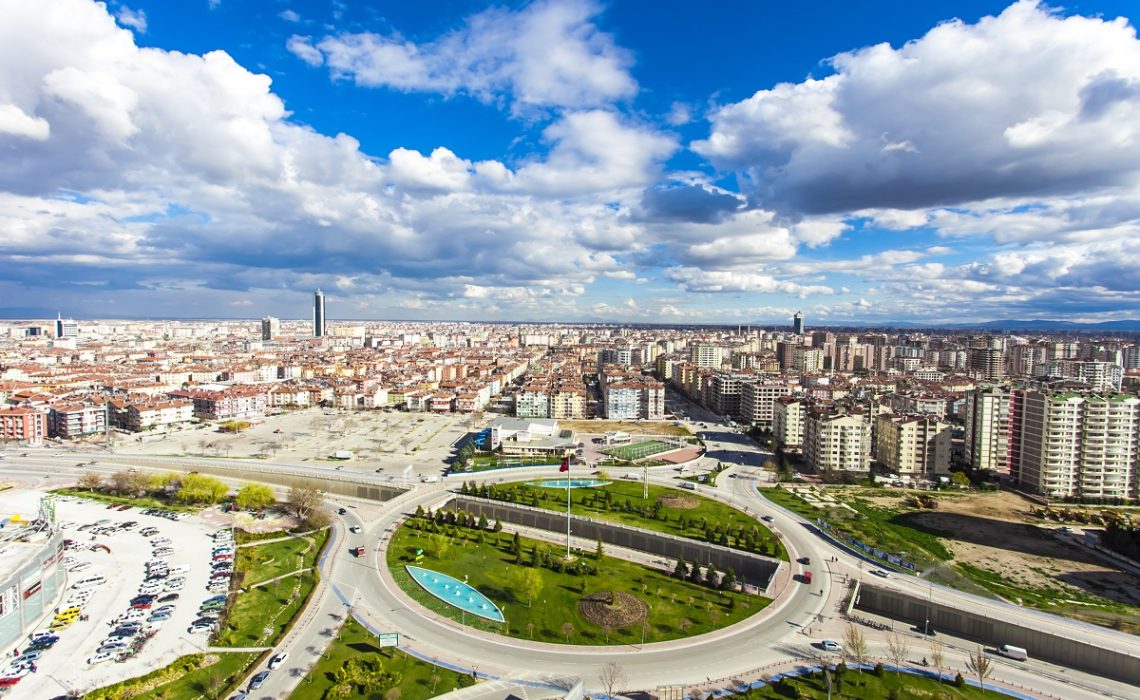 A more traditional town than many, Konya is famous as being the burial place of Rumi, the esteemed Islamic poet and philosopher and founder of the Mevlevi Order, otherwise known as the Order of the Whirling Dervishes.  Since ancient times local people have been respecting the traditions of their predecessors, so this place can be distinguished by unique mild atmosphere that covers guests of Konya with warmth and coziness. The city has been always considered the center of religion and culture. Even today, Konya is the most religiously conservative city in Turkey.

How to Get to Konya

The best way to reach Konya is by flight. The domestic flights are not too expensive and save a lot of time. Though other modes of transport are also available once you arrive at Turkey’s Istanbul airport. Use our search engine to book your flight for Konya Airport (KYA)

Archaeology shows that the Konya area is one of the most ancient settlements of Anatolia. The results of excavations in Catalhöyük, Karahöyük, Cukurkent and Kucukoy show the region was inhabited as far back as the Neolithic Period (Late Stone Age) of 7000 BC. Other settlers of the city before Islam were; the Calcolitic Period (Copper Age) civilizations, Bronze Age civilizations, the Hittites, the Frigians, the Lydians, the Persians, the Romans and then Byzantines. Konya is also an important place for early Christians because St. Paul and St. Barnabas came to the city on one of their journeys in Asia Minor around 50 AD. St. Paul preached in Konya but they angered both Jews and Gentiles so they had to leave the city and went to Derbe and Lystra.

The first exposure of the city to Islam happened during the time of the Caliph Muaviya. Later, attacks made by Arabic Muslims, whether Emevi’s or Abbasi’s, yielded no results. Konya’s real meeting with and adopting of Islam began sometime after the victory of Seljuks at Malazgirt in 1071, in the time of Kutalmisoglu Suleyman. The attacks of the Crusaders from 1076 to the end of the 12th century could not wrench the city from Islam. Konya was the capital of Seljuk Empire between 1071 and 1308. In 1220 Alaeddin Keykubad I repaired the city wall and decorated them with towers. But the city has been the site of a power – struggle between the Seljuks, Karamanoglu’s, Mongols, and Ilhan’s and it changed hands a few times. In the time of Fatih Sultan Mehmet, in 1466, Konya joined the lands of the Ottoman Empire. The first general census was made by the sultan and repeated in the times of Beyazit II, Kanuni Sultan Suleyman, and Murad III.

Under the reign of Kanuni Suleyman the city, which had been named as Karaman ili, reached the status of statehood. The borders of the Karaman state, which included the regions of Larende (Karaman), Seydisehri, Beysehri, Nigde, Kayseri (Cesarea), Aksaray, Maras, Elbistan, and Bozok, were reduced when Maras became its own state and Bozok was added to another state. Konya was affected by the Celali Rebellion. This rebellion was an outcome of the instability in the Ottoman government and land orders in the Ottoman army was defeated by the command of Ibrahim Pasa, Grand Vizir of Sultan Suleyman, in the Battle of Konya.

The borders of the province of Konya, which was set up in 1867, included Nigde, Isparta, Icel and Teke Sanjaks. In the same year, the city was affected by a big fire and in 1873 suffered a serious famine. In the 19th century the city appeared shabby and neglected and the city walls were in ruins and even the mosques were in terrible conditions. Many of the more recent houses were made of bricks and their lifespan was not more than 100-150 years. Commercial activity was slow. But at the end of the century, in 1896, after the railway to Eskisehir was opened, commercial activity was revived. After 1902, farming with machines developed. The period of sultan Abdul Hamid II was a productive one for Konya. Transport, education and restoration works flourished the city. The First World War caused the decrease of manpower in Konya and throughout the country. During the occupation of Anatolia by the Allies, Konya’s railway station was run by the British (January 1919). The Italian powers which occupied the city in April 1919, left the city in March 1920 during the Independence War led by Atatürk.

Every year in December, Konya hosts the Whirling Dervishes Festival, thanks to which the small Turkish town became famous all over the world. Konya is the oldest religious center of the country where the most significant and beautiful historical holidays are organized. The unique festival usually starts in mid-December and lasts seven days. The organizers of this holiday are followers of philosophical teachings of Jalāl ad-Dīn Muhammad Rūmī. The venue of the festival was not chosen by chance. Rumi, a great Islamic scholar and missionary who has a lot of followers among our contemporaries lived here in the 13th century. Followers of the missionary are called “dervishes”. One of the main components of their main holiday is traditional dances. Dance rituals are performed in very beautiful fluttering white clothes, which gives them special spectacular. People dance to the traditional accompaniment of drums and flutes. Today, absolutely everyone is allowed to watch ritual dances.

Our itineraries will give you suggestions for what is possible when you travel in Konya, and they showcase routes we know work particularly well. Treat them as inspiration, because your trip will be created uniquely by one of our specialists. The important religious pilgrimage site of Konya has a town center crammed with museums and monuments of Seljuk splendor. Most tourists make a sightseeing stop here simply to see the Mevlana Museum and the tomb of the whirling dervish founder Mevlana Rumi, who wrote his famed poetry here in the 13th century. But this central Anatolian city is also packed full of architectural attractions of mosques and old madrassas (theological schools) that showcase the artistry of the Seljuk sultanate. Anyone with an interest in Turkey’s history shouldn’t miss a visit here. Discover the best places to visit with our list of the top tourist attractions in Konya.

The symbol of Konya is this tekke (Sufi lodge) complex that holds the tomb of the 13th-century religious leader, philosopher, and poet Mevlana Celaleddin Rumi, who founded the whirling dervish sect of Sufism. The museum is set within lovingly tended rose gardens, which you walk through to the ornate Dervisan Kapisi (Gate of the Dervishes). Once inside the complex, you enter the Mausoleum, which is the focus of much devotional worship to this day. Mevlana’s Tomb is at the far end, flanked by tombs of close family and followers. The Semahane (hall where dervish ceremonies were performed) is just to the left and contains a museum of religious exhibits. Across the courtyard from the Mausoleum is the lodge kitchen, which contains dioramas of dervish life and is connected to the Dervish Cells, where Sufi followers would have lived and which now contain exhibits on dervish life.

This old madrassa (theological college) was founded in 1251 by the Seljuk emir Celaleddin Karatay. The building was recently restored and is now an impressive museum showcasing Seljuk enamel tile work. Although touring a tile museum may sound like a rather niche tourist attraction, the sheer beauty of the building makes this one of the top things to do on a Konya sightseeing itinerary. Its internal walls are covered in gorgeous examples of Seljuk tiling and there are also ceramic exhibits of excavated finds from nearby archaeological sites. In the left-hand room is the tomb of Celaleddin Karatay

The Ince Minareli Medrese (Seminary of the Slender Minaret) lost the minaret in its name when it was struck by lightning in 1905. The madrassa was built in 1260 for the Seljuk vizier Sahip Ata, and the design features richly-sculpted decoration on the portal. The building is now a museum, with a large collection of Seljuk-era wooden and stone sculptures that include animal reliefs (despite depictions of animals and humans being banned by Islamic law) from the old city walls.

Built on the site of Konya’s former citadel, this park, right in the city center, is the place where Konya locals come to promenade in the evening and sip tea in the gardens. At the foot of the incline up the hill, are the excavation site of Alaeddin Kaykobad’s palace and the remains of the old city wall. On top of the hill is the Alaeddin Camii, built in the 13th century. It was built as a pillared mosque according to Arabic design, with a wooden ceiling supported by 42 antique columns.

Most of Turkey’s archaeology museums have been jazzed up and modernized in the past decade, but not Konya’s museum. This is a dusty old place with poor lighting and information panels that may as well be obsolete. But don’t let that put you off, because the collection is excellent (and if you happen to like these relic museums with their treasure-hunt atmosphere, go now before it gets its much-needed facelift). There is a comprehensive display of finds from the nearby archaeological site of Çatalhöyük and a wonderful collection of intricately decorated Roman sarcophagi.

Standing in the square in front of the Mevlana Museum, this huge domed mosque, commissioned by Sultan Selim II and built between 1566 and 1574, marks the climax of Ottoman mosque architecture. Come to the square in the early evening to get photos of the mosque and Mevlana Museum behind as they are lit up against the dusk sky. Across the main road from the square are a series of outdoor cafés and restaurants, which are a great place to sit down and admire the view of minarets and domes while relaxing with a coffee or tea.

Inside Konya’s bustling bazaar neighborhood, the Aziziye Mosque is one for architecture fans. It was first built in 1676 by the Ottoman court adviser Mustafa Pasa and reconstructed again in 1867 after a fire. Because of this 19th-century restoration, the mosque’s architecture is heavily Baroque-inspired (the style most fashionable at the time), with twin minarets in Rococo style and a brightly painted interior with a Rococo prayer niche. This very European decorative style makes for an interesting contrast with traditional mosque design.

Although there aren’t huge amounts to see, the settlement mound of Çatalhöyük is one of the most important excavation sites in the world. Here, archaeologists have uncovered the largest Neolithic site ever found, with settlement here dating to approximately 9,000 years ago. Excavations are ongoing, and if you visit in summer, you can sometimes watch archaeologists working at the site.

Cute as a button, the former Greek settlement of Sille is a tiny village just on the edge of the city and a favorite destination for day-tripping Konya locals. Two Byzantine churches are here: St. Helena’s and the Küçük Kilise, which have both been recently restored.

This religious complex comprises a mosque, dervish lodge, türbe, and baths and was built between 1258 and 1283. The grandly ornate portal gate is beautifully decorated, and the mosque interior has a gorgeous blue-tile prayer niche. The dervish lodge, with its beautifully restored blue-tile and red-brick interior, has been made into a museum with an interesting collection of religious artifacts. On your way to the mosque you’ll pass by the Sirçali Medresi. Built in 1242, this former theological college has some beautiful (but crumbling) examples of tiled decoration on its interior walls and an ornate stalactite portal. It houses a collection of Islamic tombstones, as well as some Hittite funerary urns.

Avid collector Ahmet Izzet Koyunoglu, a member of one of Konya’s oldest families, bequeathed his bizarre and eccentric collection of artifacts, art, ethnography objects, geological items, and just plain stuff, to the city of Konya when he died.

Best Guided Trips to include Konya