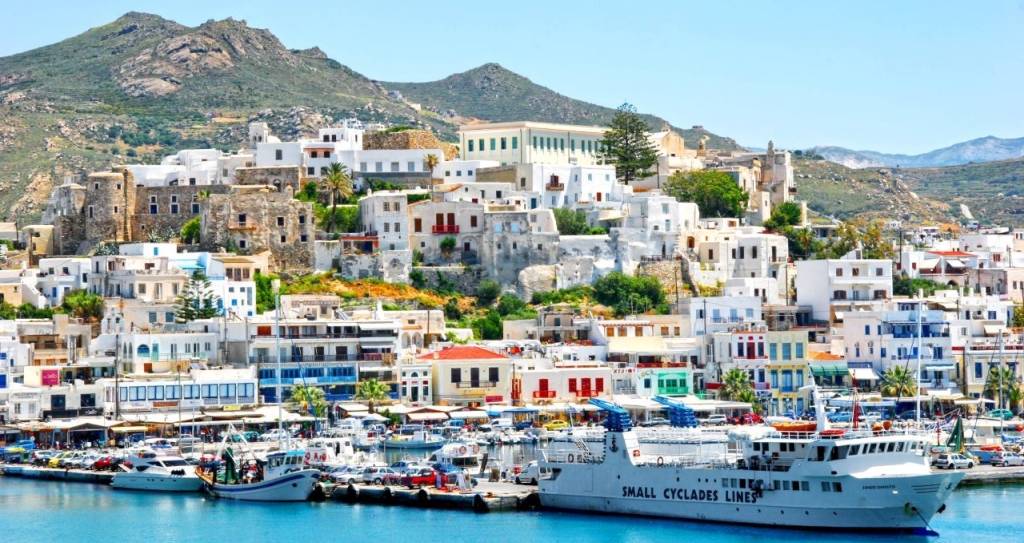 Naxos Island, the largest and most fertile island in Cyclades, is probably one of the most attractive and beautiful of the Greek Islands. It combines golden sands with the mountain beauty. Large enough to be explored, Naxos promises you unforgettable holidays. Over 40 kilometres of beaches, over 40 traditional villages, 500 churches, monuments, archaeological sites, beautiful drive on the mountains, fertile valleys make Naxos Island one of the best holiday destinations in Greece. Naxos Island has long history, Venetian occupation, Byzantine period, Hellenistic period, Archaic period and it goes back to Neolithic period. Churches with byzantine frescoes, ruins of neolithic settlements, ancient temples, Frank castles, Venetian castles, palaces, archaeological museums, folklore museums marked with the stamp of past glories and they are worth seeing them.

Due to its size and fertility, Naxos, is one of the most self sufficient islands of Cyclades, with its own production of agricultural and dairy products. The famous Naxian cheese, potatoes and citrus are just a small example of them. There are plenty of places you can buy Naxian cheese, cheese shops sell some excellent products. The best golden beaches are in the south west part of Naxos island. The south west coast is almost one long sandy beach. The northern part of the island is green verdant and mountainous. The central part of the island -around Chalki village- is planted with olive groves. In Naxos Town the “Portara” ruins of an ancient temple, the ancient Kouros statues in Melanes and Apollon (the largest in Greece – 7 century BC), the Venetian castle in Naxos Town, small white chapels and churches, monasteries, are all an experience not to be missed. There are about 500 churches and plenty of Medieval and Venetian castles to visit. In Kalamitsia (in the area of Melanes) is the tower resort of the Jesuit monks (built at the end of the 17th century). At Danakos is the 12th century Monastery of Photodotis Christ which it was built by Empress Irene. In Moni, the church of Panagia (Our Lady) Drosiani with beautiful fresco of Panagia Nikopios.

How to go to Naxos Island?

More than adequate connections between Naxos and the other islands and Mainland Greece (Piraeus & Rafina ports). Journey from Piraeus will take 5.5 hours by ferry, while Catamaran will take 3.5 hours only. There are 1-2 flights a day with Olympic Airways from / to Athens International Airport.

Use our Ferry search engine to look, compare and book all Greek Island Hopping ferries

There is a very good bus service in Naxos that covers almost all beaches and villages. Cars, motorbikes and bicycles are available for hire. Taxis are also available. There are also cruises to the islands.

The island’s port and capital, is a typical Cycladic town with a maze of narrow streets and tiny passages. Hora is a lively town and makes a very good resort. Behind the waterfront an extensive, almost Medieval Old Quarter stretches up the hillside where Kastro (Castle) is. Walking around Kastro is a must while the views will take your breath. The old town up on the hill is divided into two neighbourhoods, Bourgos where the the Greeks lived and Kastro (Castle), residence of the Venetian-Catholic nobility.

Places to visit include is the Archaeological Museum with Mycenaean pottery and Cycladic figurines, Portara (on Palatia islet) a huge portal (6 meters height, 3.5 meters width) of the unfinished Temple of Apollo (530 BC by Naxos’ tyrant Ligdamis), the Venetian Kastro (Castle) where fortress walls are dated back to the 13th century. Inside the Castle there is the Capuchines Monastery, the Catholic Cathedral, the Ursulines Monastery and the Catholic Episcopal Edifice.

is a lovely long sandy beach. There are a hotels, apartments and rooms to let, tavernas, restaurants, cars & motorbike rentals. Agia Anna is popular and attracts many visitors, many of them are repeaters.

is Naxos Town’s beach. Sandy and very long is the first choice for both swimming and staying. Although in high season, the beach can be crowded, evenings are very quiet. There are many hotels to choose from, many of them are on the beach with the sea on the doorstep. Having lunch or dinning in Agios Georgios is excellent since most of the restaurants are just on the beach. So you can enjoy your meal watching the sea, or even late evening dinning on the sandy beach, just 1-2 meters from the sea, is more than idyllic. Don’t miss it.

is 4 kilometers away from Naxos and linked with frequent buses from Naxos town. It claims to be the best beach in Naxos and in Greece.

is a very quiet place, 25 Kilometres south of Naxos Town. Is a nice and long sandy bay with accommodation and taverns. It is an ideal place for those who wish to get away from it at all and in the same time to be close to amenities.

is a pretty and picturesque village on the slops of Mount Zas and was supposed to have originally been settled by Cretans. Panagia Apeirathitissa is one of the oldest and remarkable churches of Naxos Island with some excellent post Byzantine icons. The Folk Art Museum is an interesting place to visit.

is the the northen village of the island. A lovely fishing boat port is situated on a bay sheltered by high mountains. On the way via mainland Naxos, after Skado village there are two routes available. Both of them are excellent, passing through mountains and green valleys. The route via Komiaki (Koronida) village is a longer track but the best one.

Eggares is a traditional agricultural village, not “touched” by tourism. It is situated about 5 Km north of Naxos Town in a very green and fertile valley. In the village are few taverns (some of them are excellent) and there is a mini market. The nearest beach (located in Amitis bay) is nice and sandy, not crowded even in high season, but exposed to north winds.

is worth a trip village, settled well up on the flank of Zas mountain. There are quite a few cafes and tavernas, many of them been shaded by a massive plane tree. In Filoti there is a 10th century Byzantine church with fine 13th century wall paintings. The coins and banknotes museum (located on the main road) is worth a visit.

Galini (5Km from Naxos Town) is a traditional and quiet and peaceful village, in the verdant Galini Valley, only 10 minutes drive from Naxos Town. The area is surrounded by orchards and farms and the beach is only 1500 metres away from the village. Same as Eggares village, the beach is located in Amitis bay, a nice and sandy, not crowded even in high season, but exposed to north winds.

The village is built at the highest altitude with splendid views as the mountains fall away to the coastal plain.

Koronos is a beautiful stepped village, maybe the most picturesque on the island, that scrabbles up the the mountain sides and it is renowned for its emery mines. The local Folklore Collection Museum is worth a visit. A turning off to the right, 500 meters prior to Koronos, leads to the church of Panagia Argokiliotissa (4 Km) which is beautifully situated on a hill and has an excellent view. Accommodation in Koronos is available.

is the port where the emery used to bought down from the mountains around Koronos by a rope funicular and loaded to ships. Moutsouna has a fine sandy coves and there is accommodation, restaurants and taverns for those wish to stay in this sea side village. Moutsouna can be the starting point to explore the south east side of Naxos Island.

It is divided by the so named peninsula into two main beaches. The north area is called Parthena (after Panagia Parthena chappel built on an islet), it has fine golden sand and it is a well known for wind and kite surfers. The south area is called Limanaki, it haswhite fine sand and it is protected from north winds. There is plenty of accommodation, some taverns and a couple of mini markets in the area.

the next resort after Agia Anna and it is an excellent settlement, beachside resort with fantastic fine sand. Plaka beach is 4 Km long with lots of accommodation, taverns and activities available, that makes it an ideal seaside resort.

is a group of 3 pretty villages, Pano Potamia, Kato Potamia and Mesi Potamia. It is narrow lush green valley that offers relaxation in a beautiful surrounding. The church of Agios Mamas, patron Saint of the shepherds since the 9th century is worth a visit. It is believed that it was an Orthodox Cathedral and in 1207 was converted to a Catholic church.

with its ancient monuments, Byzantine Churches, Venician castles is one of the interesting places in Naxos. The plethora of old Byzantine churches and Monasteries in the area are reminiscent of the famous Byzantine area of Mystra. The village itself with the beautiful island houses, quaint cobblestone alleys’s old churches and monasteries, amazing windmills and above all its hospitable inhabitants, gathers the interests of both localsand visitors to the area.

Eskapas Package Tours that include Naxos