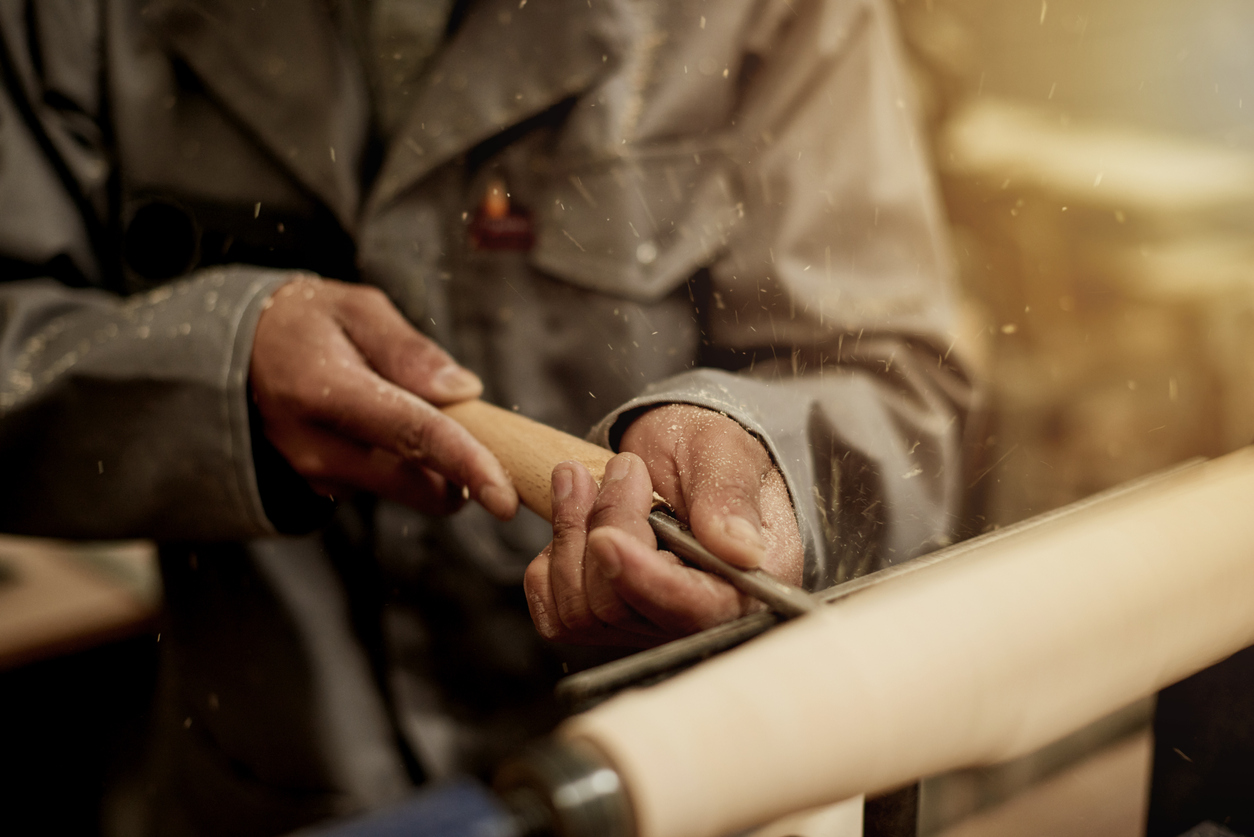 Weaving can be done with all kinds of cloth, and produces plaits, carpets, rugs and felt obtained by spinning thread, connecting the fibers together or by other methods.  Weaving is a handicraft which has been practiced in Anatolia for many years and considered as a mean of earning a livelihood. Embroidery, a unique example of Turkish handicrafts, is not only used for decoration but also as a means of communication tool with the symbolism in its designs. Today, embroidery made with tools such as the crochet needle, needle, shuttle and hairpin designed either as a border or motif, and goes by different names according to the implement used and the technique. These include; needle, crochet needle, shuttle, hairpin, silk cocoon, wool, candle stick, bead and left-over cloth. Embroidery is generally seen in the provinces of Kastamonu, Konya, Elazığ, Bursa, Bitlis, Gaziantep, İzmir, Ankara, Bolu, Kahramanmaraş, Aydın, İçel, Tokat and Kütahya, although it is gradually losing importance and becoming restricted to trousseau chests.

Along with embroidery used in traditional costumes, jewelry is also commonly used as an accessory. All the civilizations which have existed in Anatolia have produced artistic works made from precious or semi-precious stones and metal. Turkoman jewelry is an excellent example of genuine methods that were brought to Anatolia by the Seljuks. In the Ottoman period, jewelry gained importance in parallel to the development of the empire.

Stones which have an important place in human life have served mankind in various ways since the beginning of history. The entrance of stone into Turkish handicraft started with the arrival of Turks to Anatolia. Decorative stonework covers a large area in Turkish ornamenting and has protected its place even though changes have occurred depending on the period it was used in. The most common motifs of stonework are; geometric plaits, inlaid work, plant figures, low high embossed animal figures and palmets.

Stonework plays an important role in exterior and interior decoration in traditional architecture. In addition to architecture, gravestones are other examples of stonework. Techniques such as carving, relief and inscription are applied to gravestones. The ornamental motifs used are plants, geometric motifs, writing and figures. Animal figures are less common. Human figures can be found in Seljuk period art.

Having improved in the Anatolian Seljuk period, wood carving has its own unique characteristics and was first meant to cater for needs rather than aesthetics. Wood carving was used in architecture during the Seljuk and Beylic periods and later on during the Ottoman period it was used in both architecture and for daily objects. The trees that are used for woodwork are walnut, apple, pear, cedar, ebony and rosewood and as for ornamenting techniques like inlay, painting, kundekari, embossed carvings and lattice are used.

Architecture, whose origins lie in a need to provide permanent shelter, has also changed and adapted in accordance with local environmental conditions. This development led to wood carving gaining its unique characteristics during the Seljuk period. Seljuk woodworking crafts include extraordinary, high-quality workmanship, the commonest products most common being mosque niches, mosque doors and cupboard covers. In the Ottoman period, these techniques were greatly simplified and applied mostly to objects in daily use, such as tripods, wooden stands for quilted turbans, writing sets, drawers, chests, spoons, thrones, rowing boats, low reading desks, Koran covers and architectural works such as windows, wardrobe covers, beams, consoles, ceilings, niche indicating the direction of Mecca, pulpits and coffins.

The materials used in woodworking were mostly walnut, apple, pear, cedar, ebony and rosewood. Wooden objects were created by such techniques such as tapping, painting, relief-engraving, caging, coating and burning, and these are still employed today. The use of walking sticks became popular in the 19th century, and these are still popular and made by the same methods in the provinces of Zonguldak, Bitlis, Gaziantep, Bursa, İstanbul-Beykoz and Ordu provinces. While the handles of walking sticks are made of materials such as silver, gold and bone, the sticks themselves are usually made of rose, cherry, ebony, bamboo and reed.

The production of walking sticks has survived to the present day in the provinces of Zonguldak, Bitlis- Ahlat, Gaziantep, Bursa, Istanbul– Beykoz and Ordu. In Turkey, walking sticks have been used for centuries and became especially popular in the 19th century. The materials used and the work put into them account for their value. The handles are made of materials such as silver, gold, bone and nacre, while the stems are made of such woods as rose or bamboo.

The wooden pillow placed on the backs of animals used for riding, such as donkeys, mules or carthorses is called a packsaddle. It can be made of wood, metal, sedge, leather or woven fabric. Strong cords are used in order to tie the packsaddle together.

Spoon-making still continues in some regions of Anatolia. In Konya and Black Sea Region in particular, spoons have been made since Seljuk times. Boxwood, oak and pear are the most generally used woods. The spoons are shaped with the help of small adze or rasp, and are still made in the Akseki, Gediz and Tarakli regions. Today, as well as spoons for the kitchen, there are also spoons in folk dances. Spoons are cleaned with emery paper, decorated with various designs and figures or writing, and then colored before being sold.

The production of musical instruments is another venerable tradition. Such instruments are made of materials including wood, plants, animal gut, hair, bone and horn. They can be classified as idiophones, membraphones and aerophones.

Metalwork has a very important place in our traditional handicrafts, has a long period of improvement. In the Bronze Age in Anatolia, bronze obtained by mixing tin with copper, and materials such as copper, gold and silver were also wrought and cast. The most used material is copper. Various techniques, such as casting, scraping, savaklama, küftgani, ajir kesme and kazima were used. There are also different techniques for working other materials such as brass, gold, silver, and today these handicrafts are trying to be kept alive today by using high quality workmanship and a variety of designs. Copper, the commonest metal used today, is still used for kitchen utensils by plating it with tin.  This improvement that starts from central Asia continues with the great Seljuk, Anatolian Seljuk and moves on to the Ottoman empire.  Copper which has a very important place in Anatolian art is a metal suitable for ornamenting. It has been used as apart of daily objects like kitchen utensils, jewelry, and helmets and as part of building like doors and door ornamenting. Copper is the most used metal in metalwork. There are four techniques that are used in making copper utensils; pounding, molding, turnery and milling. Copper which is currently the most processed metal has a wide span of usage as kitchen utensils with its tinning technique.

The knife, a cutting instrument consisting of a handle and a sharp-bladed body, has been in use in Anatolia since prehistoric times. Sadly, however, very information is available about the development of the knife.  Knives are named according to their shapes such as; pala, hançer, gaddane and saldırma. Their handles are plated with ebony, ivory, silver or gold. The blades of knives made for the palace were decorated with different precious stones such as diamonds, coral, rubies and emeralds.

In the middle of 19th century, knives made by hand gave way to those made by machine, and knife making improved. Today, we see table knives made of rustproof steel with stable handles, and collapsible pocket knives. In some regions of Anatolia, knife handles are still decorated with various techniques.

This is used for making doorknockers, kitchen equipment, harnesses, equipment for architecture, musical instruments etc.  In Anatolia, after the Bronze Age when copper was mixed with tin in order to produce bronze, metals such as copper, gold and silver were worked with various techniques such as casting.

Research has shown that the history of copper working is very ancient and that copper mines have long been operating in Anatolia. Copper, which occupies an important place in Anatolian art, is also easily obtained. Copper is widely used in daily life for pots, jewelry, helmets, and doorknockers and to decorate doors. Copper is the mostly widely used metal. There are four techniques employed for making copper pots. These are: wroughting, casting, plating and pressing. Today, copper is widely used for kitchen equipment, where the metal is plated with tin.

Making musical instruments has been a tradition for many long years. These are made from materials such as trees, plants and the skin, bones and horns of animals, and are classified into string, percussion and woodwind groups. It is possible to classify handicrafts that are made of leather, fur, horns and bones according to the materials used and their purpose of usage.  Other types of handicrafts that can be added to this category would be; making of handmade authentic leather shoes and rawhide sandals, bookbinding, shadow show puppets, utensils and wool handicrafts.

Basket-making is carried out by weaving reed, willow, and nut branches in a way that has come down from our ancestors. It is now used for home decoration in addition to its original purpose of helping to carry things. Packsaddles made of felt and rough cloth formed a sub-branch of traditional artwork during the period when saddles were commonly used in rural areas.

Clay is the result of granite rocks being eroded by nature, and is the most suitable material for making ceramics. On account of its pliable nature, clay is easy to shape and can keep that shape after being fired. The ceramic industry, based on these principles, is one of the oldest in the world.

Pottery is an art that has existed in Anatolia for centuries (Avanos, Kutahya, etc). Clay is available everywhere and easily worked. It can be shaped while still soft without breaking. When making pots by hand, pinch, wick and tablet methods are used. There also pots shaped in molds. Pottery can be defined as an art in which pots, bowls, vases and cups are made by firing, with or without glaze.

The most distinctive examples of the glasswork of Anatolian civilizations illuminate the development of the history of glass work. Stained glass in different models and forms was developed by the Seljuks. In the Ottoman Empire, after the conquest of Istanbul, the city became the glasswork centre. Çeşmi-i Bülbül and Beykoz work are examples of techniques that still survive today.

The first production of glass in the form of a bead to ward of the evil eye was carried out by expert craftsmen in the village of Görele in the province of Izmir. It is possible to see beads for warding off the evil eye in every corner of Anatolia. It is believed that the malicious glances aimed at living things or objects can be averted by using these amulets. Amulets made of bead to ward off the evil eye are therefore put in places where everyone can see them easily.