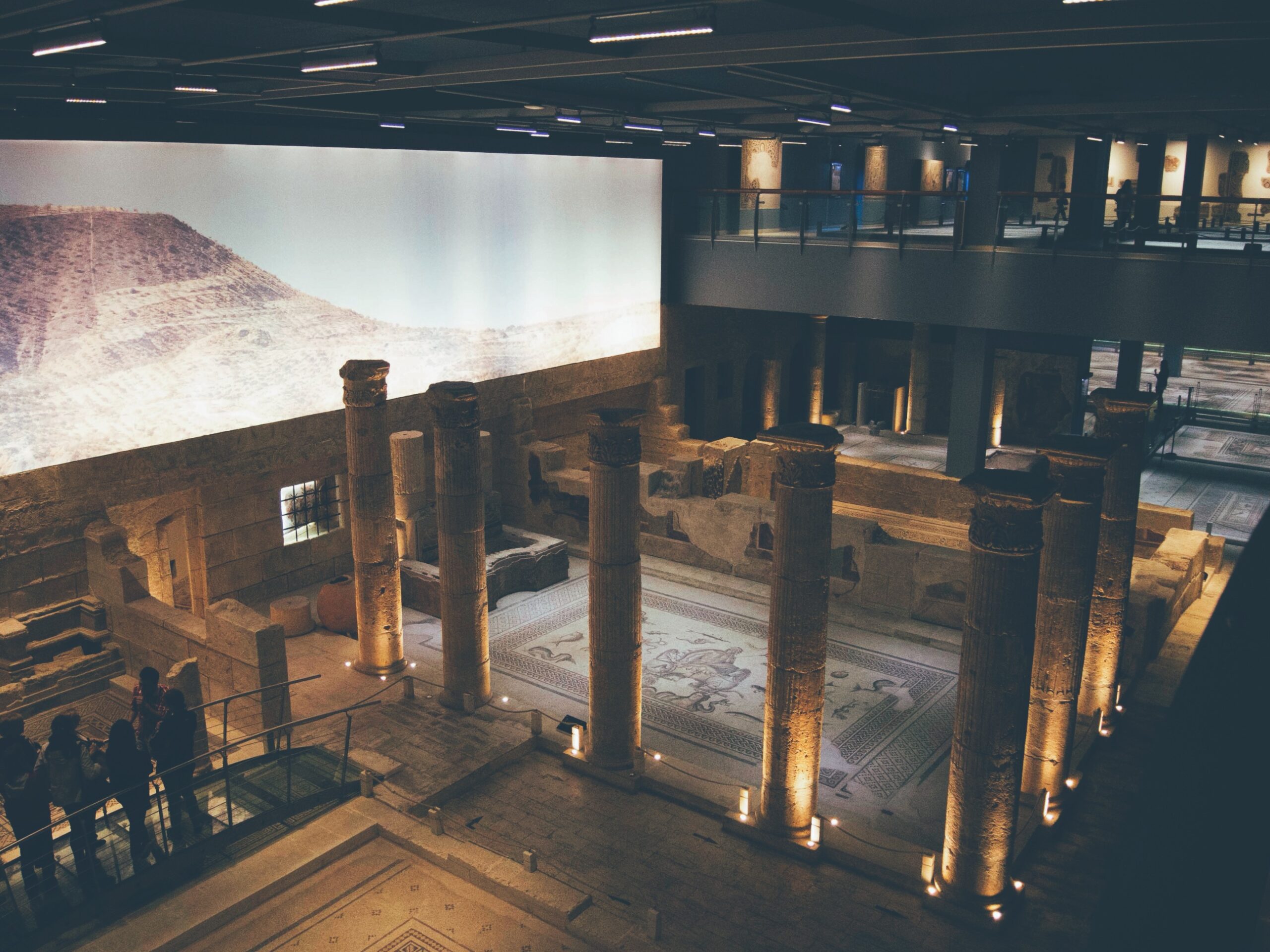 Gaziantep Travel Guide – Gaziantep manages to mix the modernity of western Turkey with the more exotic flavors of the Middle East. Spend some time wandering through the narrow-laned old town, with its graceful stone houses, and venture into the bustling bazaar filled with the sound of hammering coppersmiths. Many old houses and their large interior courtyards survive; some have been converted into museums, cafés, hotels, and inns. A melting pot of many culinary traditions, Gaziantep is also one of Turkey’s most important food capitals, and a collection of restaurants and baklava bakeries are considered among the best in the country. In fact, Gaziantep’s food is so remarkable that it’s been recognized by UNESCO. Some sources even call Gaziantep “the food capital of the world.”  You can see the main sights in one day, but could easily spend two days exploring and eating. This is pistachio country and the tasty green nuts are even named after the city (Antep fistiği in Turkish). Many Turks still refer to the city as its old name, Antep. The “Gazi” prefix was added after the city held out against a French siege during the War of Independence (it means “war hero”). In addition to the food scene you’ll find the world’s largest Mosaic Museum, an authentic coppersmith bazaar, a millennia-old castle, and hand-made leather (Yemeni) shoes. These skillfully made shoes are so famous that they were used on the set of Harry Potter – even Brad Pitt owns a pair.

The city was ruled over time by the Akkadians, Hittites, Assyrians, Babylonians, Persians, Commagene, Romans, Byzantines and Arabs The ruins of the ancient city of Dolicheies a few kilometres north and in the centre of the city is the Citadel of Ravada restored by the Byzantines in the 6th century, In the 7th century Arab armies captured the region and it passed consecutively to Umayyads and Abbasıds. İn the 9th century it was recaptured by the Roman Byzantines and the Seljuks and then the Crusaders . Finally it fell to the Ottomans in 1516 under Sultan Selimi.  The city has always been a center for commerce and trade, as it is located on the Silk Road straddling all the trade routes. By the end of the 19th century Antep had a population of 50000, two thirds of which were Muslim, largely Turkmen, but also Arabs and Kurds.

Lately, Gaziantep has been experiencing something of an economic boom, primarily the result of the Southeastern Anatolian Project’s (GAP) irrigation and hydroelectric power generation schemes. As industry and agriculture continue to flourish, house prices are on the rise, while people from neighboring regions, as well as from Syria, flock to the city. This newfound wealth is paving the way for renovation and renewal all around the city center.

One of the main reasons why visitors (especially domestic tourists) visit Gaziantep is its legendary cuisine – the result of trading caravans having tramped their way through this dusty oasis following the Silk Road. The sought-after spices, carried to Europe from the East, created a trade that also gave birth to cultural and culinary exchange. Gaziantep’s local cuisine transformed accordingly, absorbing the culinary traditions and the wealth of spices and herbs passing through. Walking around this city on a sunny day (of which there are many), you get the strange impression that someone is purposefully wafting the mouthwatering, stomach rumbling perfume of chargrilling meat in your direction. The appetizing smells lead to minced meat studded with the city’s famous pistachios or chunks cooked with young garlic or fruits such as loquat, quince or plums – pairings that you’re unlikely to find elsewhere in Turkey. Yet, the real richness of the local cuisine lies in good old fashioned home cooking and sadly, unlike Istanbul, there aren’t many esnaf lokanta (tradesmen’s restaurants) serving up this wholesome grub. So, if you get an invite into someone’s home, never turn it down! Read more Turkish Cuisine

Drinks : It’s not just the food that’s worth seeking out, there are also some interesting thirst-quenchers to sample. Swarms of traditionally dressed street vendors peddle a rather unusual drink from the copper samovars that they wear on their backs, describing the contents as ‘Turkish cola.’ Meyan Şerbeti is actually something of an acquired taste, with a conspicuous bitter flavor that comes from licorice root. You can also find dut suyu (mulberry juice) from various street carts; advertised as a natural antibiotic, it makes a sweet, refreshing drink.

The evocative architecture takes its character from the classic Northern Mesopotamian tradition of life’s main faculties built as part of sprawling mosque complexes. Rows of domes, high archways and inviting doorways form the backbone of the historic center. The origin of the castle, which looms over it all, is thought to date back to Roman times, but the structure that remains today mostly dates back to the Mamluk reign.

The historic center is mostly a joy to walk around, apart from during the hottest summer months. The many bedestens (covered bazaars) ring with the continual hammer of metal on metal, as the city’s renowned coppersmiths skillfully shape everything from doublehandled sahan (pans) to long handled cezve (Turkish coffee pots) to ornately decorated serving plates. All of these make excellent souvenirs, as do the kutnu textiles, which come in a dazzling array of striped colors. These shiny woven fabrics are made from silk warps (lengthwise yarns) and cotton wefts (crosswise yarns), using a technique that was brought to Gaziantep in the 16th century from neighboring Syria and is kept alive by local craftsmen.

Gaziantep’s center is also a must for food enthusiasts. Hollowed out dried aubergines, peppers, courgettes, and even cucumbers, hang like edible Christmas decorations, just waiting to be stuffed with a spiced rice mix. Colorful spices that border the narrow streets are heaped up into aromatic pyramids. Ones to look out for are pul biber (red pepper flakes), saffron, and sumac (this sour ground berry can also be bought in liquid form). You can also pick locally produced versions of nar ekşisi, the sweet and sour pomegranate reduction, though make sure they don’t contain added sugar.

Gaziantep is also famous for its hand-stitched leather shoes known as yemeni, produced by local craftsmen, the köşker. They come in ruby reds, royal blues and mustard yellows, as well as the classic black and brown. These impossibly comfortable soft flat shoes are made from five types of leather, including water buffalo hide for the soles, and goatskin tops, and are stitched together with beeswax coated cotton threads. Hayri Usta, the most famous producer in the area, has even provided shoes for Hollywood blockbusters, including Harry Potter and Brad Pitt. 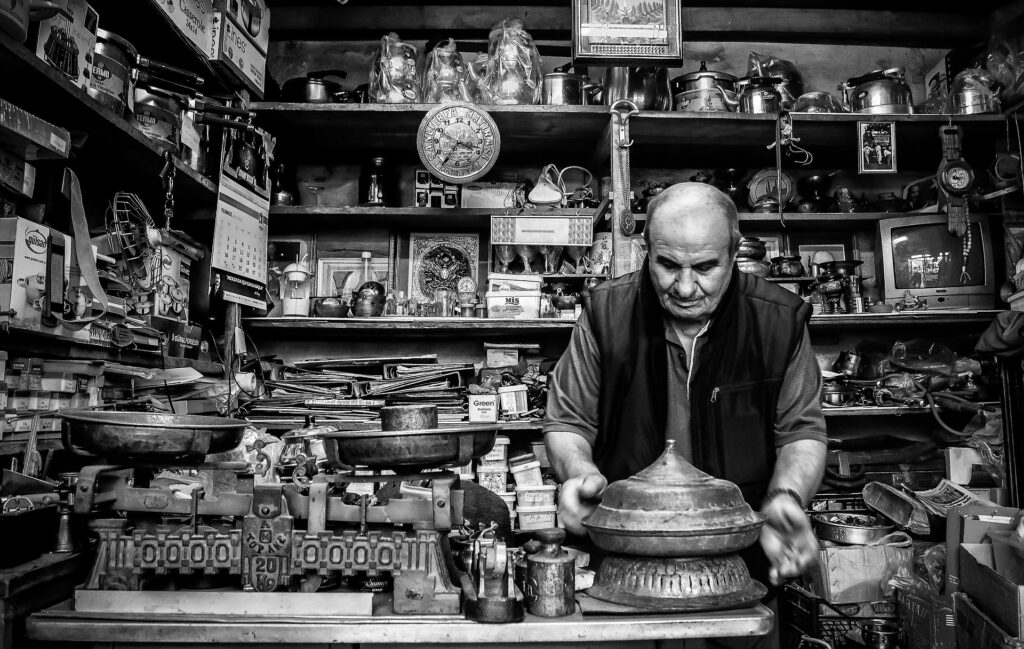 Even if you weren’t interested in Gaziantep cuisine before, the briefest of stays here is likely to have sparked a certain curiosity. This small (but perfectly formed) museum is a homage to Gaziantep’s edible offerings, containing a huge amount of information and the main components of the region’s cuisine, along with traditional cooking implements, videos, and occasional demonstrations. (WEB)

The impeccably preserved mosaics found here, many of which date back to the second and third century A.D., are some of the best in the world. They were discovered in 1995, at the Hellenistic/ Roman settlement of Zeugma, just east of Gaziantep. Although the importance of the original settlement was known, it wasn’t until the site was threatened, due the creation of the Birecik dam, that the wealth of treasures was discovered and properly excavated. The mosaics now on display at the museum would have previously decorated the floors of the villas built by wealthy merchants on the banks of the Euphrates. Yet Zeugma was burnt to the ground by the Parthians during the mid-third century, while the mosaics covered by the burnt debris survived in near perfect condition for almost 1800 years. They now adorn the walls of this ultra-modern yet atmospheric museum, and some of their original settings have been brought to recreate the look of Roman peristyle villas. (WEB)

From Myth to Mosaic

A Photography Experience: North Mesopotamia The Land Between Two Rivers