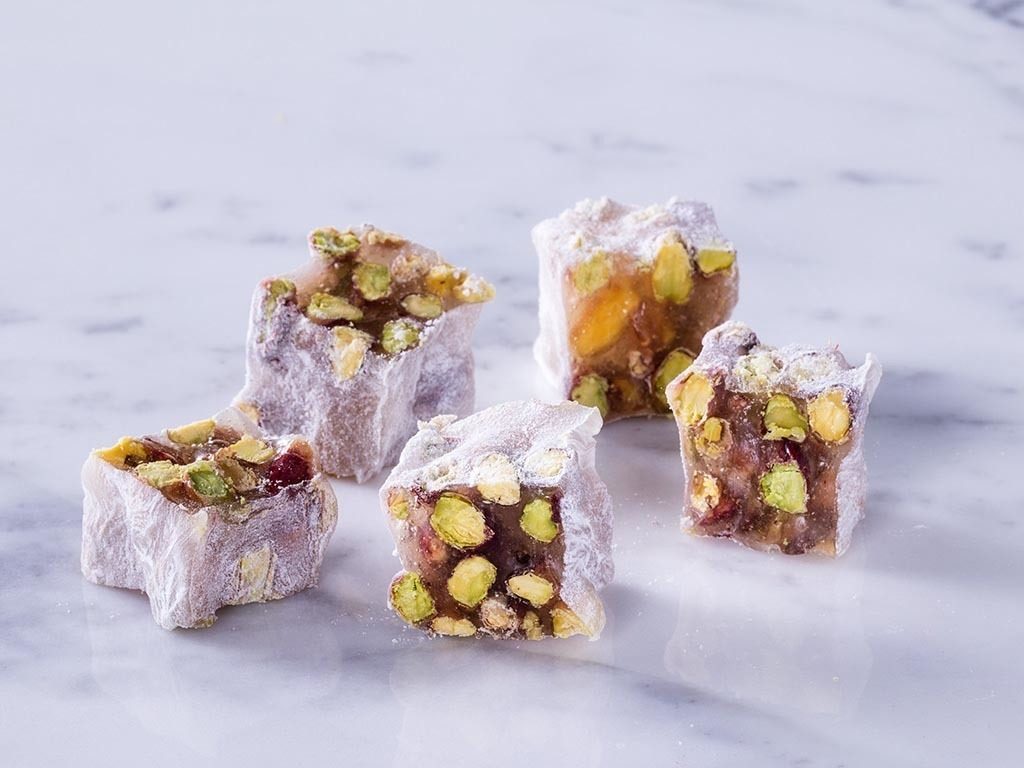 What is Turkish Delight?

What is Turkish Delight? Some of you may be thinking; “surely everyone knows what Turkish delight is!” Right? Well, yes you are right. Kind of. Most people do recognise “Turkish delight”, have an idea of what it is and can at the very least describe it along the lines of; “those little-sweet-fragrant-soft candy things from Narnia“. Often adding “I like the rose and lemon Turkish delights” to their vague description of the delightful candy having been acquainted already. But let’s be honest, in our day and age of food awareness where we are constantly reminded of what exactly goes into the making of our foods and its journey to our plates, that’s not much of an accurate description. Nor does it do justice for the national treasure which has now almost become part of the Turkish identity outside of Turkey, synonymous with anything good to come out of Turkey.

So, what is Turkish delight? And how did it come to be known as such globally? Putting aside all the puns and semantics and delving into the real history of Turkish delight reveals an intriguing story of how this simple, yet delightful recipe managed to capture hearts and sweet-tooth’s all over the world.

The Real History of Turkish Delight

Lokum or Turkish delight is inherited from kitchens of the Anatolian Seljuk Empire and the Ottoman Empire. It is mostly thought that lokum comes from “Rahat-ul hukum” which means relieving throat. So, people in Anatolia are in love with dessert from the 15th century. In the beginning, honey and pekmez (concentrated grape syrup) were used as sweeteners and flour was used as a stabilizer. According to many resources, the inventor of the delight has been pointed as Sekercibasi Muhittin Haci Bekir Efendi. So, traditional Turkish delight is identified with “Haci Bekir Turkish Delight”. The reason is that Haci Bekir Efendi made the lokum by a new technique. He used starch and refined sugar to make the delight which is the current condition of lokum. Hacı Bekir migrated to Istanbul to establish his now legendary confectionery shop in 1777, which still stands today in Bahçekapı district. Hacı Bekir’s soft and fragrant lokums quickly became popular with the locals and it didn’t take long before word reached the Palace. He was soon appointed Şekercibaşı (chef pâtissier) of the Imperial Kitchens of Topkapı Palace, which churned out daily feasts for the residents of the palace including the royal family and the prominent diplomats of the Ottoman Empire in Istanbul. Since, Hacı Bekir’s Turkish delight recipe has won countless awards both at home in Turkey and abroad in Europe, which has adorned the walls of his shop along with Ottoman Baroque inspired branding for almost 300 years. In fact this very first shop of Haci Bekir and him serving an Ottoman mother with her two young children were the subject of a watercolour painting by Amadeo Preziosi, a Maltese painter known for his paintings of the Ottoman Empire and the Balkans in the 18th and 19th century. The painting is currently on display at the Louvre Museum in Paris.

Turkish delight is known amongst Turks and much of Middle Eastern cultures as Lokum (from the Arabic influenced Ottoman Turkish word rahatü’l-hulkum meaning ‘eases the throat or comforting to the throat’). With the influx of European travellers to the exotic land of Ottoman Empire in the early 19th centry, travellers were introduced to Lokum in Istanbul and brought back boxes of the lumps of delight with them. However, the term Turkish Delight was coined by the British merchants who first imported the little morsels of soft candy coated in sugar dust on the shores of Great Britain as its fame grew. Eventually, Lokum made its way to the handkerchiefs of the European elite, as a rare, expensive delicacy to be savoured and only accessible to those in the right circles.

So Turkish delight made its way into popular western literature in the 1800’s and appeared in many diaries kept by those who have had the fortune of stumbling upon these “lumps of delight”. In fact, much earlier than the popular novel by C. S. Lewis, The Chronicles of Narnia, in the book The Mystery of Edwin Drood, Charles Dickens references Turkish delights as Rosa Bud mentions a shop “Lumps of Delights” to Edwin, elaborating “a Turkish sweetmeat, sir”.

You can find hundreds of different Turkish delights in the shops in Istanbul and Turkey. So, let’s see the most popular types.

Note: You should definitely try Afyon clotted creamed, Sultan and Safranbolu Turkish delights. Moreover, people also like chocolate-covered ones. In these days, “Zeresk grape covered and pomegranate aromatized Turkish delights are very popular. This is a great combination of sour and sweet. One of our favorites is with orange aroma and nut particles, as well.

Basically, geographical indication refers to the originated region or a method that is specific to a region. For instance, Safranbolu is well known about Turkish delight and different house types. Formally, Safranbolu Lokum is geographically indicated. As expected, this delight contains “saffron” which makes this delight different and famous. Ottomans used saffron for a lot of foods like Turkish delight and they gave extra importance to saffron. And there are different types of Safranbolu Turkish delight with or w/o saffron.  Additionally, we would definitely recommend a visit to Safranbolu if you have enough time in Turkey. You will not regret

How to make Turkish Delight at home?

It is not an easy task to make Turkish delight at home. So, a small mistake can ruin everything. But, if you are ambitious to make it at home, you should practice a lot to find the best texture. Turkish delight is a difficult product and even many brands can’t produce it in good texture. And, we think that some brands are masters. However, it is really difficult to find this quality everywhere. Basically, the most important quality parameters are softness and elasticity. Additionally, lokum should not be too hard and too soft. Another important point is chewiness. So, it should not be sticky or hard. There is no expected microbial deterioration for plain delight due to its low water activity. On the other hand, this may happen for creamed delight or delight with nuts. So, the addition of nut or cream can affect the shelf life.  Rarely, mold or bacterial growth can be observed for these delights. The reason is generally to store the delight at inappropriate temperature conditions. Moreover, if the delight is open to the air, its surface gets moisture and gets sticky or dry depending on the environment. So, it should be carefully stored in a package or jar close to the air.

Where to buy Turkish Delight in Istanbul?