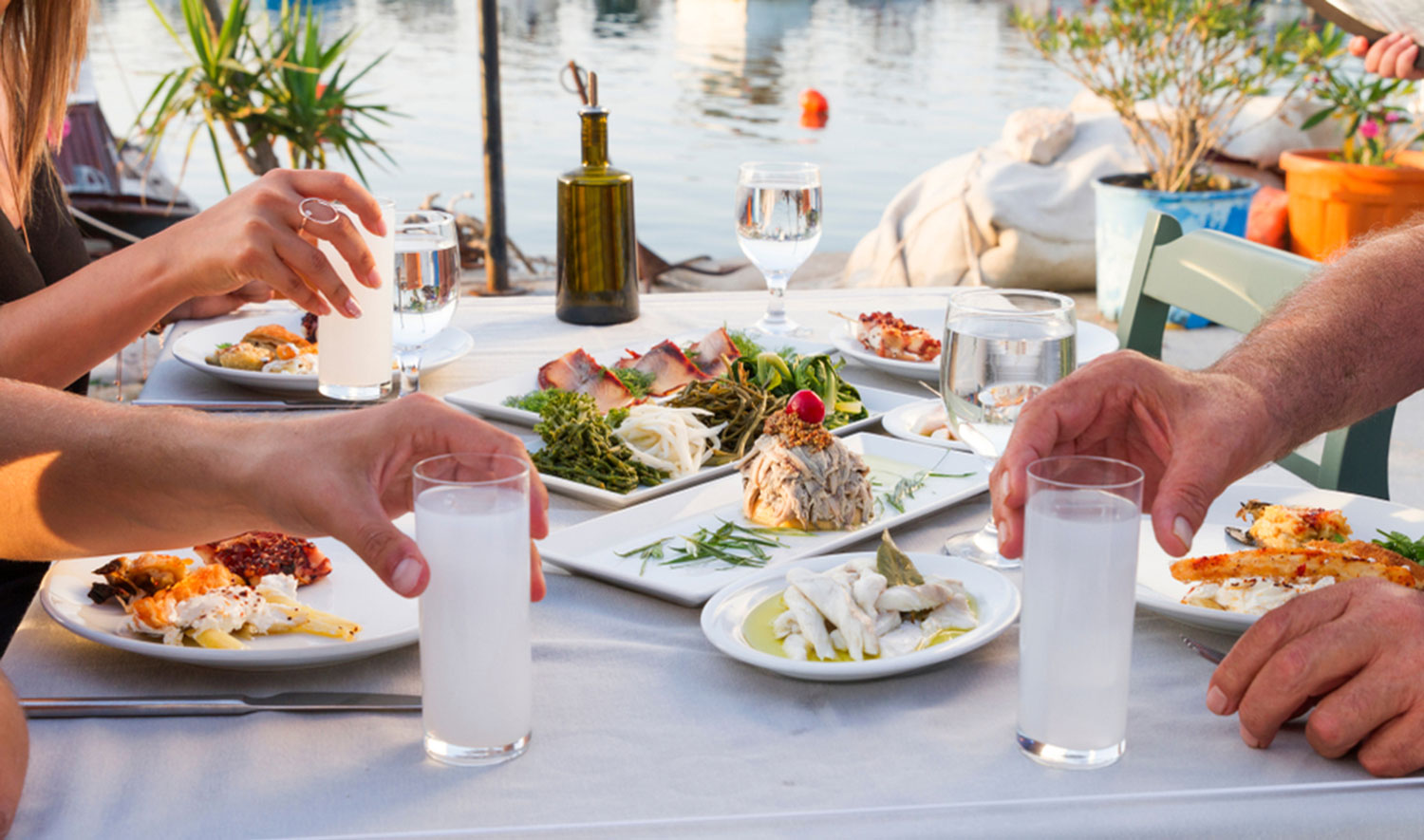 Turkish Raki Culture, All You Need to Know

Turkish Raki Culture – Drinking raki is an art and raki has its own culture. It is unusual for a Turk to drink alcohol without eating at the same time. Raki traditionally accompanies a meal of fish and in between meals, melon and white cheese are often served alongside it.

Drinking raki in the company of family and friends at home as well as in taverns and restaurants is a part of special occasions. The traditional tipple is raki, a strong aniseed-based spirit, which is sometimes known as lion’s milk. It is clear but turns cloudy when water, ice or soda is added. Most people do dilute it with water although some drink it only with ice. Some prefer raki straight up with a glass of water on the side, although this is not recommended for inexperienced people.  Raki is so entwined with eating meze, that the meze spread is often called a raki table. Raki can be drunk with any meal yet mostly preferred by the water with seafoods.

One of Turkey’s greatest temptations is raki, a limpid liquor with anise. Like many Turkish things – baklava, mousakka, its share of the Mediterranean Sea, raki is quite similar to its Greek counterpart, ouzo. And like most things that both cultures share, Greeks and Turks will proudly claim that they invented alcohol made from grapes Although France, Italy, Spain and Greece all have raki, the Turkish raki is a whole different experience. Only produced in Turkey and due to the aniseed it contains, raki changes color and becomes a milky white when water is added and a glass of pure water to go with it gives a distinct pleasant taste. That’s why the Turkish raki is popularly known also as lion’s milk.

Raki is made in Anatolia and known as Turkish raki has a history going back 300 years. The art of distillation which started in the Arab world and spread to the neighboring countries was implemented when people thought of making use of the sugar in the residue of wine processing. With the addition of aniseed, raki took on its Turkish characteristic. The famous Turkish traveler Evliya Çelebi listed the artisans of Istanbul in the first volume of his book on his voyages which he wrote in 1630. Among the artisans he also mentioned the arak-makers. While writing that arak was made from all kinds of plants, he also mentioned the word raki and said that drinking even one drop of this intoxicating drink was sinful. It is known that at that time in Istanbul 300 people in 100 workshops were occupied in the production and sale of this drink. Evliya Çelebi spoke of tavern-keepers as “accursed, ill omened, blame worthy” and said there were taverns all over Istanbul but especially in Samatya, Kumkapi, Balikpazari, Unkapani, Fener, Balat and the two shores of the Bosphorous and added “Galata means Taverns”. Evliya Çelebi recorded the small wine shops and the kinds of wine they sold and also mentioned the taverns that sold raki, all kinds of raki, like raki wine, banana raki, mustard raki, linden raki, cinnamon raki, clove raki, pomegranate raki, hay raki, aniseed raki.

It may seem strange to have such a strong spirit as the national drink of a predominantly Muslim country. Turkey has a rather complex Ottoman past, which was a multi-national, multi-ethnic, and multi-religious empire. Though the majority of Muslims followed Sunni orthodoxy and observed the Quran’s prohibition on alcoholic drinks, they were exposed to other faiths and their traditions. The boundaries between communities could be blurry at times, and apparently there were always a sizable number of Muslim drinkers. Though many of the sultans were known to be drinkers (yet did not blink an eye in banning other Muslims from drinking it) the first ever sultan who openly enjoyed his drink was Sultan Mahmud II, who reigned between 1785 and 1839. The Tanzimat reform period (1838-76) led to a more relaxed attitude to Muslim drinkers, and drinking became more associated with ‘modernity’. The mid-nineteenth century brought another benchmark in the history of rakı; before the Crimean War (1853-56) it was illegal to distill spirits in Istanbul, but after the 1860s there was an enormous increase in places serving and selling alcoholic drinks, with many inner-city small-scale rakı producers coming into the scene. By the onset of the twentieth century, rakı brands were already numerous, openly and proudly advertising their rakı.

The secular Turkish Republic established in 1923 had a new take on spirits. The production of rakı was taken under the state monopoly Tekel, originally initiated during the last phase of the Ottoman Empire to control the trade of tobacco.  Tekel remained the sole producer of rakı in state-operated factories until the monopoly was ended in 2004 and regulations allowed private firms to produce distilled spirits.  Today’s rakı scene is now enormously varied; from oak cask-aged spirits to nostalgic rakı reminiscent of turn-of-the-century brands. Rakı has only gained in popularity over the past century and a half.

Raki is serious business in Turkey. Raki is the go to spirit for a celebration. However, you can’t just drink raki anywhere, at any time, with anyone. All these variables depend on unspoken codes and are highly dependent on one another. Drinking raki is an art and it has its own culture. Raki traditionally accompanies a meal of fish and in between meals, melon and white cheese are often served alongside it.

The ritual of drinking raki actualizes around the raki table. Therefore, the first requirement to drink raki is a simple table. After it is found, do not think of opening a Raki bottle and sitting at the table alone, because, frankly, the key to drink Raki is people. Raki never goes down well if a pleasant talk is lacking. However, pleasant talk doesn’t mean that you should be unnecessarily adorable or try too hard. Instead, you are always expected to be natural and modest at the raki table. Raki is consumed with appetizers called “meze”, and locals say the best meze for Raki is conversation.

Raki is the spirit of joy, taste, friendship and sharing.

The joy of raki has nothing to do with his taste or his story. Raki’s pleasures stem from her role as a catalyst for sharing – delicious food and seemingly long hours of conversation – and her tendency to turn your stomach into a never-ending crater for gluttony. However there is a rule for drinking this lion’s milk. Even though it is mixed with water, it still quite strong (40-50% alcohol). This fact is also reminded in a Turkish proverb which states “drink carefully cause it doesn’t sit as calm inside you as it does in the bottle”. For this reason, come along and let us show you how to appreciate and enjoy the beauty of raki. Raki is all about sharing and enjoying the moment together. During the first glass of raki people usually listen to subjects of daily life, but two glasses later, the talk moves on to matters of the heart, and inevitably turns to politics. Everyone saves the world in his/her own way at the raki table hence never and ever break a heart at a raki table. Don’t forget not to turn of your phone and whatever is told and said stays at the table

From Leblebi to Liver

Everyone in Turkey has strong opinions on how to drink rakı: neat; with ice; with cold water; with ice and cold water; one-third rakı with two-thirds water; half and half; one ice, or two, or three…the list is endless.  Just as rakı is distilled drop-by-drop, it is wise to savor it slowly; each sip followed by a sip of cool water, with intervals to take a break, exchange a few words, take a bite of mezze, and repeat the process.

Rakı is never drunk without food to go accompany it. One great nibble is leblebi, roasted chickpeas, which absorb the alcohol, and do not carry excess calories or upset your stomach like chips or fries. Another must-have combination is the unwritten holy trinity of Istanbul nights: rakı with fresh white melon and briny white cheese. The saltiness of the cheese complements the sweetness of the melon and satisfies the need for a light protein bite to help the rakı go down. The anise flavor of rakı pairs wonderfully with the aroma of the melon, while its freshness spikes the cooling effect of rakı, again a quality imparted from anise, while the tang of cheese balances this wonderful taste trio. Rakı also heightens the flavors and freshens the palate during the full mezze experience. Start with cold mezze: seafood such as lakerda (salt cured bonito), çiroz (dried mackerel), or ahtapot salatası (octopus salad) are mezze classics. Other popular mezze include acılı ezme (spicy red pepper and tomato paste), haydari (cool and minty strained yogurt), patlıcan salatası (smokey, lemony roasted eggplant), or satisfyingly smooth and soft fava bean paste. Cold mezze is followed by warm dishes; with arnavut ciğeri (sautéed cubes of liver), paçanga böreği (pastrami-filled fried börek), kalamar tava (crunchy fried calamari), and ahtapot ızgara (chargrilled octopus) among the most popular. It’s all about balancing and contrasting textures, sensations, and flavors, so that rakı and mezze never gets boring. Read more about Turkish Cuisine

Having read this piece, you have now mastered raki-drinking. You only need to learn one word to start clinking glasses and begin the anise-infused nights of Istanbul: “Şerefe!” To your honor!