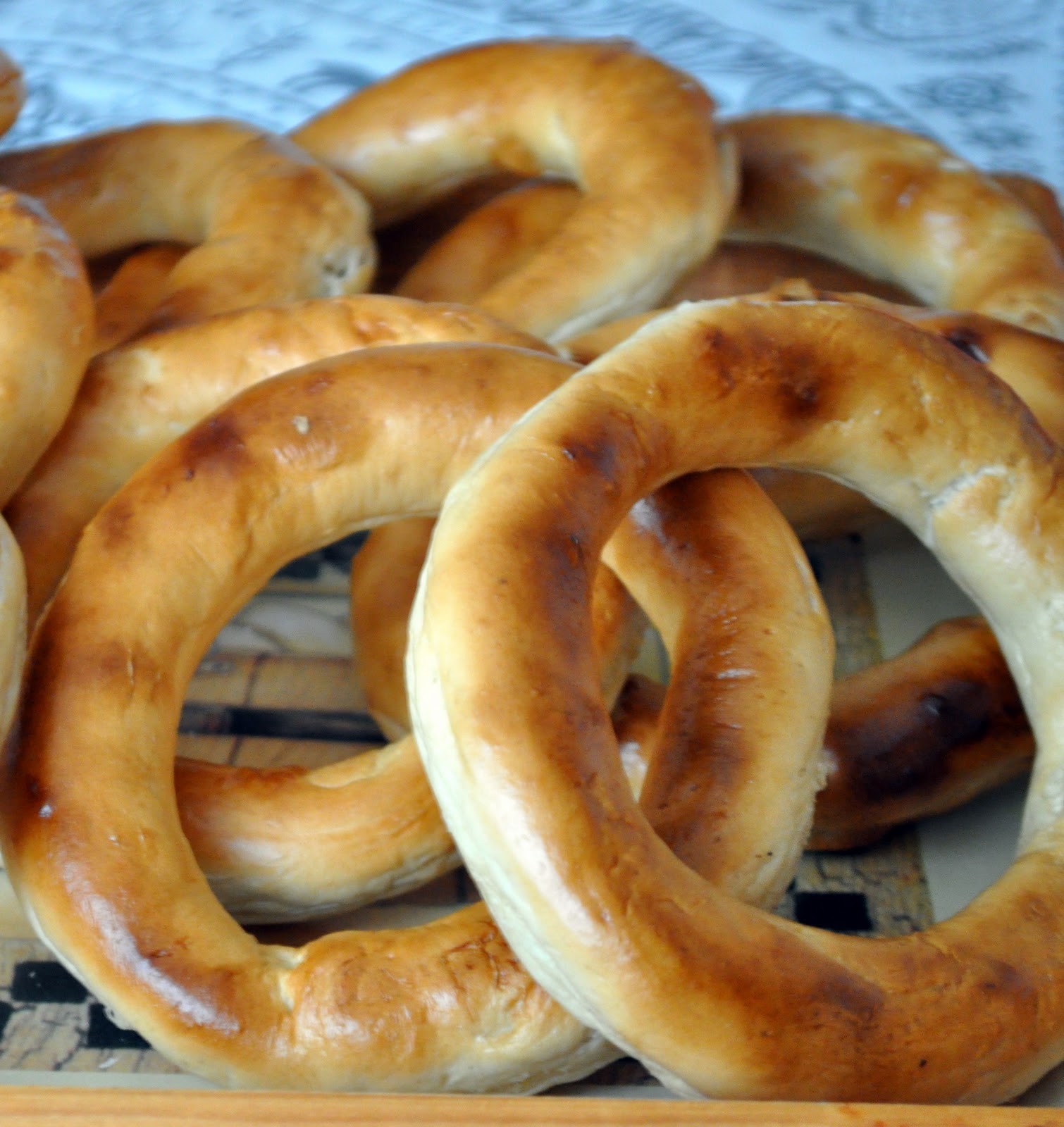 The Turks made a great variety of bread from the wheat they mill, and these products had an equal variety of names, sometimes based on the manner of cooking, and other times based on their appearance. Traditional Turkish bread was mostly baked at home in an oven called a tinürü(mod. Turkish: tandır). It is recorded that for feast days, differently flavored breads were created with the addition of butter, spices and fragrant herbs.

Bread has an extremely important place in Turkish cuisine; it is the basic staple. Whatever type of bread it may be, people think of how to earn their daily bread, so much so that the term ekmek parası is applied to money earned, or the recompense for one’s labor. This is a clear indication of bread’s importance in daily life. A cheap source of energy, bread is important in the nutrition of the poor. Bread is not only satisfying, it provides a significant portion of people’s protein requirements. Today, in addition to traditional types of bread, we have many types made with modern means. The additives used in the making of these breads increase their nutritive value and quality. The replacement of single-family homes with gardens by apartments has limited the making of traditional breads. The various traditional breads are today made mostly in rural areas Bread has an essential place in traditional Turkish cooking.  Less attention is given to pide, as well as to products with lower water content or items such as çörek, made with the addition of ingredients other than flour, water, salt and leavening.

Although in Turkey, it is made of wheat flour, some regions also use barley, rye, or in the Black Sea region maize flour. Roughly speaking Turkish bread fall into three categories: very thin rolled sheets known as yufka, flat leavened one such as pide and loaves known as somun. Yufka, the most usual type among nomadic communities, is cooked on a griddle and then dried, in which state it will keep for a long time.

Some of these flavoring agents include salt, cumin, nigella seed, fennel, saffron, sesame, mustard and watermelon seeds. Some areas had breads that had become locally famous. For example, it is stated that the King sent Karkamış bread to Lasmah-Addu, along with wine and various other gifts. As there were vineyards in this region, it is thought that this bread could have been a raisin bread. During later years, paper-thin yufka bread made its appearance with the nomadic people of Asia. The long keeping properties of yufka bread was important for the Turks in their nomadic lifestyle. It is written that eight to ten of these thin yufkas were stacked and then rolled. During the summer it was preferred to other breads because of its long lasting properties.

A similar bread to yufka is lavaş. Thin pide was known as yufka in both Azerbaijani and Çağatay Turkish. In addition to these breads, there are types of breads made with corn, barley, millet and wheat flour, leavened and unleavened, with and without oil, thin and thick, sweet and unsweetened, and cooked on a convex griddle called a saç. Another type, known as sinçü, resembled modern-day pide. A type of cookie called çukmin comprised  yet another type of bread. As many different names as there were, we must accept that there were some that did not resemble breads, such as çörek, pide, etc. It is recorded that Turks in the 11th century were making various çöreks which resemble those made today. Among the various types of çörek was kömeç (<kömmek, mod. Turkish gömmek, “to bury”) which was made by burying the dough in hot coals, and which survives today by the names gömeç-gömbe-kömbe and göbe-göbü.

Bazlama is common in Anatolia, especially in Central Anatolia. The dough is rolled out into a circle from 20-25 cm wide and 1 cm thick and cooked on a sac or in a tandır. In some regions such as Niğde and Elazığ, it is rolled out very thin, to 2-3 mm. The baked thickness of bazlama ranges from 1.5-2 cm, and its color varies from brown to white according to the strength of the flour . In Denizli, bazlama is made with a combination of wheat and corn flours  In some areas, bazlama is sprinkled with sesame .

The dough is made from wheat, corn and millet flour, salt, water and sourdough starter. The raised dough is divided into pieces, rolled to 1-1.5 cm thick and baked on a sac

Mısır ekmeği is a savory Turkish cornbread that is especially popular in the Black Sea region of the country. Its texture is usually hard and dry because it is prepared without a raising agent. The bread can be shaped into circles, tubes, oblongs, or plaits. Cheese, dill, sesame, poppy, and nigella seeds can all be added to the dough in order to enhance the flavors. A specialty of the region is cornbread with sardines, which are traditionally baked in the dough. If made this way, the bread is typically consumed with yogurt as a full meal. Mısır ekmeği is usually sliced into small pieces or broken in chunks, preferably with some butter, cheese, fruit jams, dips, or sauces on the side. 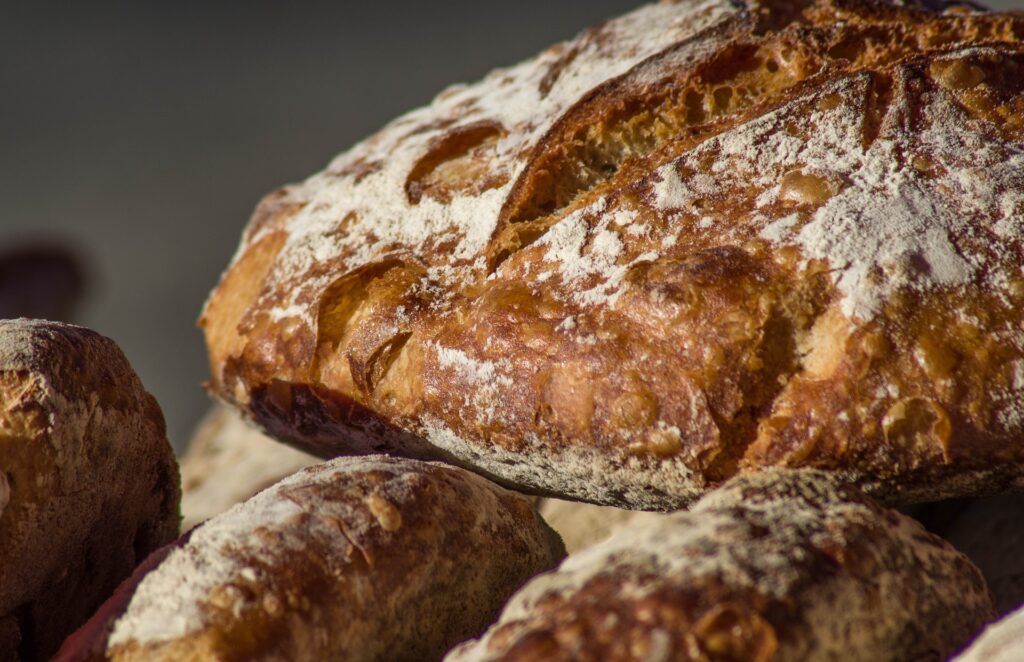 Called “gastra” in Antalya, this is a traditional type of bread made at home and cooked in ovens. Ev ekmeği is also made by immigrants from the Balkans living in Suşehri near Sivas. The dough for this type of bread is softer than that for normal loaf bread. The dough is placed in a clay pot known as a çerepene. This is covered with a sac filled with coals, the heat from which bakes the bread. The sac is lifted from time to time to check the progress. If it is too hot, the top of the bread is covered with paper, and it is wrapped in order to soften

Ramazan pidesi is a traditional Turkish leavened bread shaped into round, flat forms. It is made with flour, water, milk, yeast, sugar, salt, and either butter or olive oil. Traditionally consumed during the month of Ramazan, the bread is characterized by its top which is decorated with crisscross patterns or dimples made by pressing into the dough with one’s fingers. Before baking, Ramazan pidesi is typically sprinkled with nigella seeds and sesame seeds.

This is made by dividing a leavened dough into pieces and rolling them out like yufka, then cooking on a sac. After cooking, both sides are oiled. This bread is made in the Ankara region

This is made from high-strength (whole-wheat) flour. It is thinner than pide and rectangular in shape. It is recorded that the Soup Kitchen of the Fatih Mosque Complex handed out fodla with food for the poor. The word fodla is Arabic in origin

This is a wide circular flat bread with a hole in the middle. Gilik is made for two different purposes. One is memmecim gilik, the other is kirk gilik. Memmecim gilik are bread rings up to 7 cm in diameter. They are sold strung, up to 20 at a time, in markets set up during Ramadan and the Feast of the Sacrifice. Kırk gilik is made and distributed on the fortieth day after a death of a family member (kırk = forty). They are sprinkled with nigella. Gilik is made in the Sivas region . Around Erzincan, the word “gilik” refers to small breads cooked on a sac

The raised dough is divided into pieces of the desired sized. These are baked in the oven on a sac supported on legs. They are made in the region of Cihanbeyli

Made of a leavened dough prepared with wheat, corn and barley flours, and stuck to the sides of a tandır to bake. If they are to be kept for long periods, they are left longer in the tandır to dry completely. This type of bread is moistened before eating (10).

Baked in the region of Niğde. The dough is rolled out into a thick rope by hand, made into a U shape and baked in the oven. It is overbaked, and then allowed to dry for two days, after which it is stored hung over a rope

This is made by dividing the dough in to round pieces and cooking them in a deep stone called a bileki. They are made in Artvin

Pieces of dough approximately 500 grams in weigh are rolled out to 2 cm thick and baked in a tandır. Made in Arpaçay, Kars region

This is a bread made by baking yufka from leavened dough on the walls of a hot tandır. In the Sivas region it is baked in an oven. Lavaş bread is generally made in the regions of Erzurum, Kars, Muş, Konya (Yunak) and Erzincan. After lavaş is baked, it is generally an ellipse 30-40 cm in length, 15-20 cm wide, and 1-1.5 cm thick, however it made sometimes be made in different sizes . In the region of Elazığ, it is known as tandır bread .

A bread made by rollıng leavened dough into a circle 1 cm thick and 10-15 cm wide, and cooking on a sac (7). In some regions it is baked in the oven, and in others, such as Niğde, Karaman and Sivas, it is baked on a sac placed over the tandır. In Niğde it is called mayalı sepe (“leavened sepe”) (16). A bread made in the same way but a bit larger in the Sivas region is called ekşili ekmek (sour bread) (7). It is made in the regions of Elazığ, Hatay (Kırıkhan), Gaziantep (Islahiye), Mardin (Kızıltepe), Konya (Çumra-Ereğli-Karaman), Niğde and Aksaray.

The raised dough is made into rounds of any sized desired, allowed to rise again and baked in the oven. This type of bread is made in Osmancik, Çorum province

Made by shaping the dough into thick discs 15-20 cm wide, and sticking to the walls of the tandır. Made in Sivas-Gemerek

Known in Urfa (Hilfan) as açık ekmek (“open bread”), this bread is made by rolling raised dough into an ellipse or circle 2-3 mm thick and baking on a sac. The finished thickness is 3-4 mm, and can be thicker. In the Sivas region, the raised dough is opened by hand or with an oklava to 15-20 cm wide and 1 cm thick, and baked on a sac. It is eaten fresh or a few days old

This bread, the names of which mean “Between the Sac Bread” or “Between Two Sac’s,” is also called kapama (closing), sac kapama or kastra. It is made like sac bread but rolled a bit thick. The prepared dough is put onto a hot sac, and this is covered with another sac covered in embers to cook. This bread is made in regions including Akşehir (Gözpınar), Sivas (Bedirli), Kayseri (Tomarza), Niğde (Höyük-Bor) and Manisa