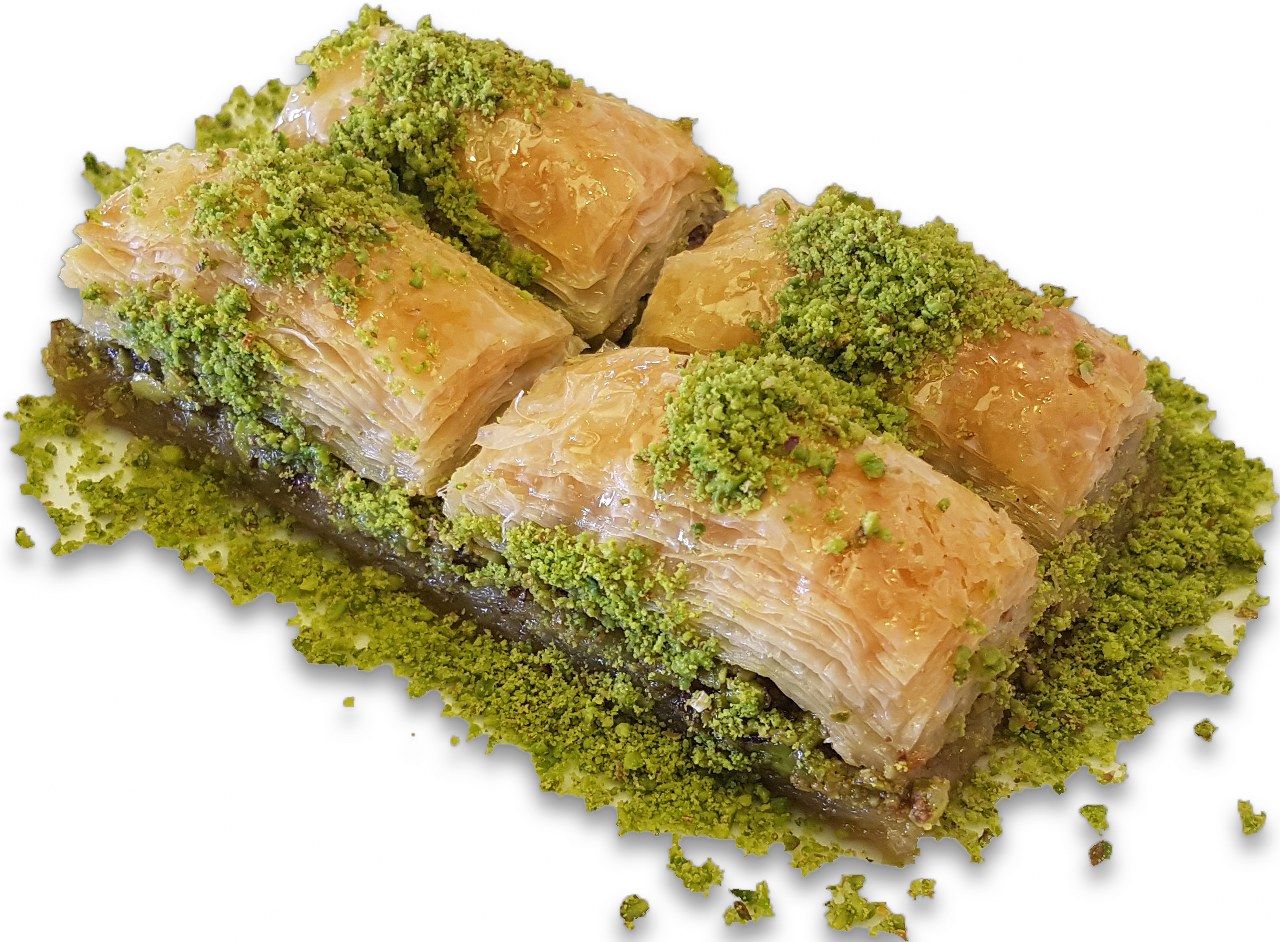 Turkish Baklava : Today, we are going to take you a culinary journey of baklava which is at the top of the list of desserts in Turkish cuisine. Turkey has always been as a dessert lover’s paradise and baklava is at the top of the list. The crispy Turkish baklava is sweetened with light syrup made from sugar, water and lemon juice to make it deliciously light. Baklava is of Turkish origin and the world’s favorite Turkish dessert. It is extremely delicious, traditional and authentic dessert. This famous dessert consists of thin pastry sheets that are brushed with butter and folded, layered, or rolled after being filled with ground pistachios, walnuts or heavy cream, and then baked, after which a syrup is poured over them.

Of all Turkey‘s delicious sweet confections, the most famous is baklava. This exquisite flavored pastry has been made in Anatolia for long centuries, and its ancestor may be a dish made by the Assyrians consisting of dried fruit sandwiched between two layers of pastry and baked in the oven. The earliest record of baklava as we know it today locates it in Damascus, from which city it spread to Gaziantep and from there to the rest of Turkey. By the 17th century at least the fame of baklava had spread to Istanbul, since towards the end of that century baklava was being made by the palace cooks as a special treat for the janissaries in Ramazan. The janissaries carried the trays of baklava out of the palace in what was known as the Baklava Procession.

During the reign of Sultan Suleiman the Magnificent (1520-1566), the soldiers had been given a large meal of pilaf, lamb stew and saffron flavored rice pudding (zerde) before setting out on campaign, and in time, this tradition was replaced by the distribution of baklava during Ramazan. In the Istanbul Encyclopedia, historian Ilber Ortayli gives this description of the Baklava Procession: ‘In the middle of Ramazan the sultan, in his capacity as caliph, would pay a ceremonial visit to the Mantle of the Prophet and the other holy relics, which was followed by the Mantle of the Prophet Procession. Following this ceremony trays of baklava prepared in the palace kitchens, one for every ten janissaries, cavalry soldiers, artillery men and armorers, each wrapped in a cloth, were laid ready outside the imperial kitchens. The fit tray was taken by the master armorer and his officers in the name of the sultan, who was himself first janissary. After that the others would be picked up in turn by pairs of soldiers, and each unit with their officers would line up for the parade, followed at the back by the soldiers holding the trays of baklava. They would march out of the palace gate and down the main road known as Divanyolu to their barracks with great pomp and clamor, watched by huge crowds. The following day the empty trays and cloths would be returned to the palace.’ In later years the Baklava Procession deteriorated into a noisy and disorganized occasion, and the trays and cloths were no longer returned, with excuses like, ‘the baklava was so tasty we ate the trays and cloths as well.’ However, despite its unprepossessing end, the procession was one of the interesting customs of Istanbul in the past.

In the first printed Turkish cookery book, Melceü’t-Tabbahin (Refuge of Cooks), its author Mehmet Kâmil gives five recipes for baklava: ordinary baklava, baklava with clotted cream, decorative baklava with clotted cream, baklava with melon, and rice baklava. Baklava has spread so far and wide that today it is to be found and eaten with relish in approximately one-fifth of the world’s countries. It is surprising, for example, to find that baklava is popular in Texas, where it was introduced in the 19th century by Czech migrants. Less surprising is its prevalence throughout the Arabian peninsula, North Africa, the Turkic republics of Central Asia, Greece, Albania, Macedonia, India, Afghanistan and Armenia. However, there is an important difference between the baklava made in all these countries and that of Turkey – the thickness of the pastry layers.

On the 15th of every Ramadan, it was customary in the Ottoman palaces for the Sultan to present Baklava trays to be distributed to the janissaries in a tradition called the Baklava Alayi. It is said that accepting these trays – especially by the higher ranking janissaries – indicated satisfaction with their pay and conditions, while returning the tray was to communicate dissatisfaction. The Harem would also distribute Baklava trays to their janissaries and would go the extent of distributing them to the populace in special events and celebrations. In modern days, Baklava is still considered – by many – the sweet of choice for celebrations and gifting. Many would serve Baklava to everyday guests and on special occasions such as Ramadan, Eid and other occasions. Furthermore, many would give Baklava as a gift when visiting guests. This tradition still lives on and had been started back in the Ottoman days.

Baklava as an Aphrodisiac

There was a special reason for baklava being a favorite among the wealthy families and the Ottoman Sultans with their large harems. Pistachio and honey were the two prime elements and when consumed regularly they were believed to be aphrodisiacs. Cloves of two spices, cinnamon for females and cardamom for males, were added to increase the aphrodisiac effect of the pastry.  According to a belief, Gaziantep was the first settlement to introduce baklava in Anatolia. Whether it is true or not, Gaziantep‘s version is famous for the simple fact that the pistachios grown there are really tasty. The nuts used in Turkey for baklava show variations depending on the geographical locations. In Southeast Anatolia the pastry is made with pistachio nuts, in the Black Sea region with hazel nuts, in central Anatolia with walnuts and on the Aegean shores with almonds.

Turkish Baklava is basically 40 layers of crisp phyllo dough (paper-thin sheets of raw, unleavened flour dough used for making pastries) alternated with a sugary spiced nut mixture, which includes walnuts, almonds, and most possibly pistachios. The pastry is prepared on large trays, and melted shortening is poured on top. After baking, the whole thing is soaked in fragrant sweet syrup made with honey, lemon, and cinnamon. Sweet and exotic, baklava is cut into small pieces of various shapes (triangles, squares, or diamonds) and cooled before serving.

As a sweet, rich dish that requires time and expense in its preparation, baklava has generally been regarded  as a dish reserved for special occasions. In some areas, baklava is the most important sweet served at weddings, and religious festivals.  The origin of baklava has continued to be disputed, since many ethnic groups claim this delicious, exotic dish as their own. Each nations proclaims that baklava belongs to their cuisine. This led to a “baklava war” proclaiming “Baklava is Turkish or Baklava is Greek”.  The history of this scrumptious delicacy is quite controversial, and unfortunately not very well documented. Many ethnic groups such as the Greek, Turkish and Middle Easterners claim baklava as their own, and prepare it in their own way. The “Baklava Conflict” has been simmering for centuries, but it erupted into full-blown war in 2006, when Greek Cypriots decided to call baklava their own. A definite sacrilege according to the Turks! However  Gaziantep, a city in Turkey, is famous for its baklava and, in Turkey, is widely regarded as the native city of the dessert. In 2008, the Turkish patent office registered a geographical indication certificate for Antep Baklava. Turkey, as an aspiring member of the EU, took the issue to Brussels. Eventually in 2013, the EU awarded the “protected status” prize to the Turkish Gaziantep baklava, shuttering the dreams of Greeks worldwide.

And the winner is Gaziantep Baklava

The most beautiful baklava in the world. The Gaziantep baklava, described as a “pastry made of layers of filo pastry filled with semolina cream and Antep pistachio”, became the first Turkish product to receive the coveted status  Gaziantep is recognized worldwide with the miraculous culinary culture that UNESCO has registered. The amazing baklava prepared with a thin sliced 40 layers of rolled dough, filled with the finest peanuts in the world, resting in a delicious sherbet, is in the heart of this extraordinary traditional cuisine.
Protected Geographical Indication: Gaziantep baklava is the first ever Turkish product registered in the European Commission list of protected designations of origins and protected geographical indications, a list that aims to promote and protect the names of quality regional products.

The Ceremony of Eating Baklava

In Turkey the sheets of pastry for baklava are rolled out so thinly that when held up the person standing behind can be seen as if through a net curtain. Elsewhere a thicker pastry of the type used in Turkey for savory layered pastries, is used for baklava, which gives a coarser texture and flavor. For the initiated, eating baklava has its own rules. Separating the top and lower layers, or cutting through the lozenge shaped pieces with a knife or fork is frowned upon. Instead you should first leisurely survey the glorious sight of the baklava on your plate, then spear a lozenge with your fork in such a way that one third of the piece is behind the fork and the other two thirds are facing you. This is so that the lozenge does not break in two. The crunch made by the fork as it penetrates the crisp layers is another pleasure which should not be allowed to pass unnoticed. As you lift the piece to your mouth you should halt to savor the fragrance – which should be dominated by the wonderful aroma of cooked butter. Finally you pop it into your mouth and the baklava experience is complete as the flavor pervades your palate. If there is no crunch when your fork and teeth penetrate the baklava, then it is stale. Well made baklava should melt in the mouth, and should not be excessively sweet or syrupy. And if you get heartburn afterwards, then change your supplier, because that means they are not using the finest quality ingredients.

Key Points to Tell if Baklava Is Well-made

The Güllüoğlu family have been in the baklava business since 1820 so it is fair to say that they are well acquainted with the Turkish dessert. The family business opened a shop in Karakoy in 1949 and has since gained a reputation throughout the city for exceptional baklava – arguably the best in Istanbul, recommended by visitors and locals alike. The shop sells baklava alongside other the sweet treats, and the boxes it is packaged in make impressive souvenirs of Istanbul.

Those who sometimes find baklava a little too sweet will appreciate Köşkeroğlu’s perfect balance of pastry, butter and honey. This must-visit store’s baklava is a strong contender for the best in Istanbul, with outstanding flavor combinations, both traditional and unique. The long queue of locals outside the restaurant is a testament to the quality of the baklava found here.

Hafiz Mustafa is one of the oldest baklava shops in Istanbul and a great spot for tea and cakes. It sells an assortment of traditional Turkish treats, from Turkish delight to candied fruits and, of course, baklava. The baklava alone comes in an impressive variety of flavors. Buy a single piece to nibble on the spot, or choose a selection box – an ideal Istanbul souvenir.