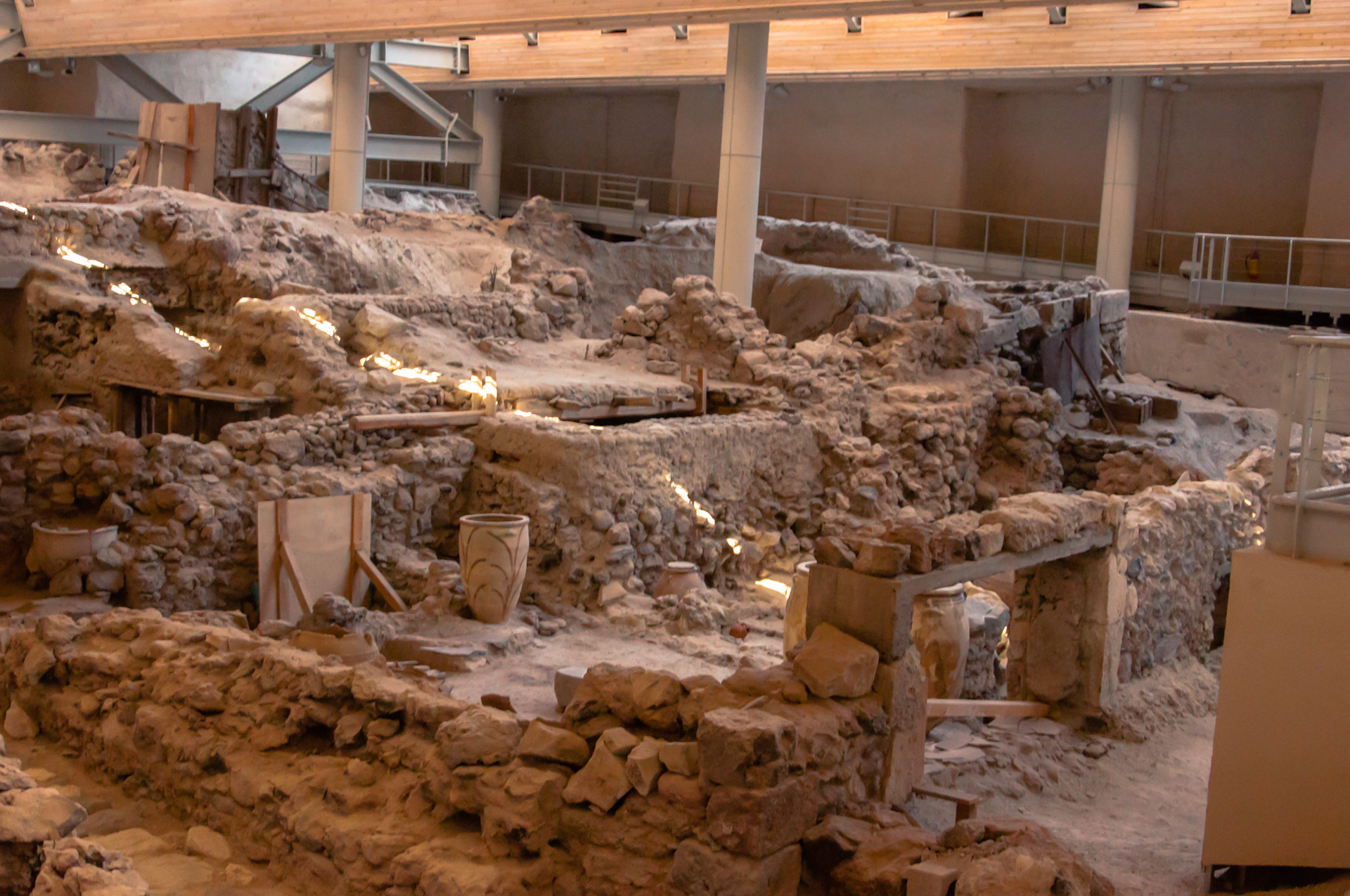 Akrotiri of Thira – The tour in the archeological site of Akrotiri is for every visitor a trip back in time. Buildings and objects trapped under a thick layer of volcanic material remained intact or left their imprint.
Akrotiri is one of the most important prehistoric settlements of the Aegean. The settlement was one of the major cities and ports of the Aegean during the Middle and Late Bronze Age (20th-17th century BC). It was a crowded city of 20 acres with a remarkable social structure, public roads, sewerage, sanitary engineering, multi-storey buildings.

The town’s life came to an abrupt end in the last quarter of the 17th century B.C. when the inhabitants were obliged to abandon it as a result of severe earthquakes. The erruption followed. The volcanic materials covered the entire island and the town itself. These materials, however, have protected up to date the buildings and their contents, just like in Pompei.

The absence of human skeletons on the site proves decidedly that the inhabitants had time to abandon the settlement. More probably they abandoned the island as well. Perhaps the disaster caught them gathered in an open space or even in the port trying to save themselves and their belongings.

It seem that the departure took place in an organized and methodical way. The old walls collapsed. Piles of stones were gathered in areas where they would not obstruct circulation, ready to be reused. The big vessels were placed under the doorways, so that they would be well protected. The desire and the hope to return were obvious .The valuable objects left with the inhabitants who abandoned the town.

The buildings of Akrotiri are a unique example of impressive architecture. Magnificent structures with carved facades housed communal services. Private houses included workshops and warehouses besides the rooms for the family. The building materials came from the island itself or were imported from other areas. Stone from the quarries of Thira was the main building material. Pebbles and gravels were collected and used for walls and floors. Valuable timber from Crete was used for wooden frameworks in the walls providing antiseismic reinforcement. Slabs of plaster from Knossos quarries were placed on the floor over a layer of crushed purple shells. Know-how and good taste were obvious in every activity.

5000 vessels of various types and sizes, tools, figurines, ritual objects and furniture that came to light during the excavations testify the great development of the settlement. Food left-overs and bones of animals help us reconstruct the nutritional habits of the inhabitants. Impressive frescoes, the oldest samples of monumental painting in the Hellenic world, decorated almost all the building complexes providing us with valuable information about the society of Akrotiri through their narrative character.

Various imported materials and objects prove the relationships and the contact of Akrotiri with Minoan Crete, the Dodecanese, Cyprus, Continental Greece as well as Egypt and Syria.

Akrotiri is referred to as the ‘Greek Pompeii’ because the site was covered in volcanic ash. And, like its Italian namesake, a charred bed was also recovered by archaeologists. This along with a number of frescoes and other artefacts are on display in the Akrotiri of Thera Room in the National Archaeological Museum in Athens.

The archaeological site of Akrotiri is directly south of the modern-day village with the same name, at the south-western part of the crescent shaped island of Thíra, the largest island in the Santorini archipelago.

How to Get to Akrotiri?

Akrotiri is easy to drive to if you have a rental car. But having a car for your stay is not essential. Some of the guided tours recommended on this page and detailed elsewhere do include a transfer from your hotel/holiday accommodation. Also, public transport on the island is very good.

There are regular buses from Fira (the central bus station for the island) to the car park at Akrotiri Red Beach throughout the week. Form there it is about a 250 meter walk to the archaeological site. From Fira to the Red Beach car park takes about 20 minutes, and costs around €2 for an adult.

Full €14, Reduced €7
A 4-day ticket is for archaeological Sites and museum in Thera: Ancient Thera, Akrotiri, Archaeological Museum, Museum of Prehistoric Thera, Collection of Icons and Ecclesiastical Artefacts at Pyrgos

There are a couple of beaches around the Akrotiri Excavations. Some are difficult to reach beaches without any amenities, but beautiful views. Other beaches around Akrotiri are pretty luxurious. You will even find some beaches at the Caldera