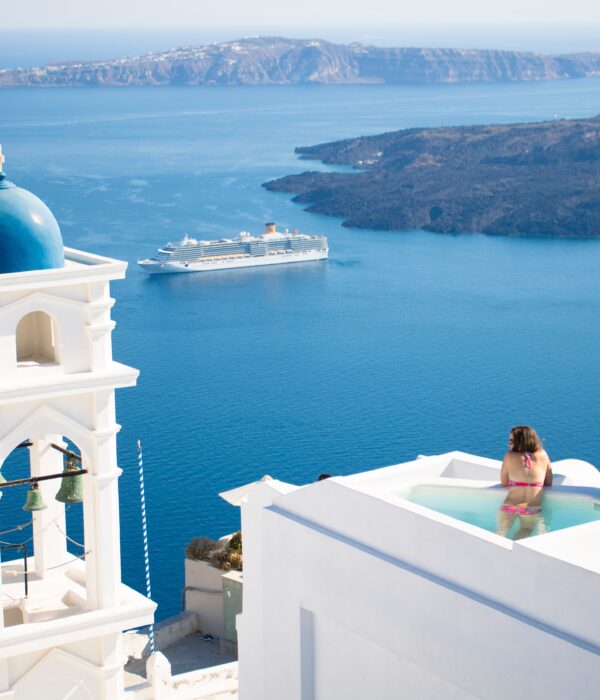 Santorini (or Thíra), the precious gem of the Aegean, is actually a group of islands consisting of Thíra, Thirassiá, Asproníssi, Palea and Nea Kaméni in the southernmost part of Cyclades. 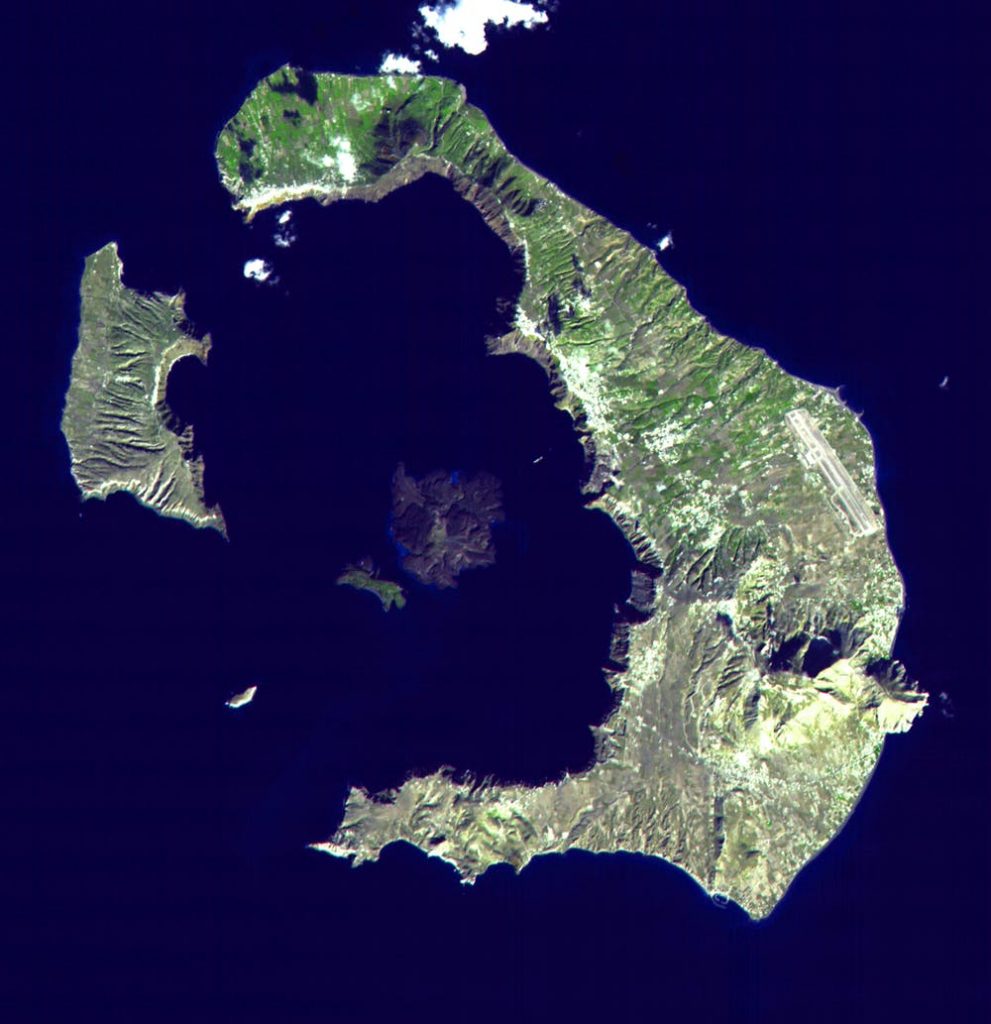 The whole complex of Santorini islands is still an active volcano (the same as Méthana, Mílos and Nísiros) and probably the only volcano in the world whose crater is in the sea? The islands that form Santorini came into existence as a result of intensive volcanic activity; twelve huge eruptions occurred, one every 20,000 years approximately, and each violent eruption caused the collapse of the volcano’s central part creating a large crater (caldera). The volcano, however, managed to recreate itself over and over again.

The last big eruption occurred 3,600 years ago (during the Minoan Age), when igneous material (mainly ash, pumice and lava stones) covered the three islands (Thíra, Thirassiá and Asproníssi). The eruption destroyed the thriving local prehistoric civilization, evidence of which was found during the excavations of a settlement at Akrotíri. The solid material and gases emerging from the volcano’s interior created a huge “vacuum” underneath, causing the collapse of the central part and the creation of an enormous “pot” –today’s Caldera– with a size of 8×4 km and a depth of up to 400m below sea level.

The eruption of the submarine volcano Kolúmbo, located 6.5 km. NE of Santorini, on 27th September 1650, was actually the largest recorded in Eastern Mediterranean during the past millennium! The most recent volcanic activity on the island occurred in 1950. The whole island is actually a huge natural geological/volcanological museum where you can observe a wide range of geological structures and forms!

One of the best destination for honeymoon

Santorini is considered to be the most sought after place for a romantic getaway in Greece, since there are not many places in the world where you can enjoy exquisitely clear waters while perched on the rim of a massive active volcano in the middle of the sea! The island has a growing reputation as a “wedding destination” for couples not only from Greece but from all over the world. A trip to Santorini with the other half is a dream for anyone who has seen at least one photo of the island’s famous Caldera and exchanging kisses beneath Santorini’s famous sunset is the ultimate romantic experience!

Firá is the picturesque capital of the island; perched high up on the edge of the Caldera, it looks like a marvellous painting. Firá, together with Oia, Imerovígli and Firostefáni located high above on a cliff, make up the so-called “Caldera’s eyebrow”, the balcony of Santorini, which offers an amazing view of the volcano. Other famous smaller villages are Akrotíri and Méssa Vounó, with their famous archaeological sites, Pýrgos, Karterádes, Emporió, Ammoúdi, Finikiá, Períssa, Perívolos, Megalohóri, Kamári, Messariá and Monólithos: some of the villages are cosmopolitan some more peaceful; they are surrounded by vast vineyards; whitewashed cliff-top towns with castles affording amazing views out over the Aegean. Soaking up the villages’ distinctive traditional atmosphere is a very rewarding experience.

A visit to Santorini is the ultimate gastronomic experience, as the island is a true culinary paradise! Treat your taste buds to some famous traditional products like cherry tomatoes, white egg plants, fava, caper and “hloró tyrí”, a special kind of fresh goat cheese found on the island, or why not try some of the exceptional wines produced from grapes grown in the volcanic soil of the island! Assyrtiko, Athyri, Aidani, Mantilaria and Mavrotragano are just some of the distinctive varieties that you can taste at the island’s famous wineries (some of them operate as a museum as well) or at restaurants. Related:  Santorini Wines

Did you know that a visit to Santorini would still be a unique experience even if the island wasn’t as breathtakingly beautiful as it is? Did you know that visitors here enjoy a feast not just for their eyes but also for their taste buds? The dazzling light and the Aegean breeze combined with the island’s fertile volcanic soil nurture the local agricultural products, endowing them with top quality and a unique taste. The most renowned products from Santorini are:

Used in many recipes, ranging from freshly boiled plain fava to fava with pork or with tomato puree, or as a soup, with rice or in an omelette, these peas are popular with visitors to Santorini thanks to their fine taste.

The magic thing about this variety of aubergine is not just that it has been coloured white by the volcanic soil. It is also that the bitterness sometimes found in aubergines is completely absent and instead the flesh is sweet and juicy.

Both the flowers and the leaves are used in local cuisine for their spicy sharp aroma.

It was in the 18th century that the locals first cultivated this variety of tomatoes, which owe their unique taste to the arid soil of the island.

Venture into Santorini’s seaside treasures and enjoy deep blue waters and beaches with white, red or black sand or volcanic pebbles, spectacular rock formations and impressive lunar landscapes. Santorini, the youngest volcanic land in the Eastern Mediterranean, is waiting for you! You can reach it by plane or by ship from Piraeus. Don’t think twice! Experience for yourself the once-in-a-lifetime romance and charm of this pearl of the Aegean.

Start your journey in the northern part of the island at the sun-drenched beaches around Oia; they have a wild untamed beauty and most of them cannot easily be spotted from the main road. Ammoudi, on the harbour of Oia, is a picturesque beach lined with charming cafes and restaurants. The small beach of Armeni with its azure waters and magnificent view of the island of Thirassia can either be reached by boat from Ammoúdi or on foot. There is a small footpath connecting Oia with Armeni, but if you find it hard to climb up and down 286 steps, riding a donkey is the alternative solution! A diving centre is also available for adventure-seeking beachgoers. Looking for a little seclusion and serenity? Baxedes (or Paradisos), a quiet beach with black sand and chiselled rocks or the black-grey sandy beach of Kolumbo (mostly frequented by nudists) are the ideal choice…According to volcanologists, the largest active underwater crater of Santorini is located in Kolumbo! Katharοs beach will impress you with its wild landscape whereas Pori is a quiet family beach!

The wild beauty of the beaches on the eastern side of the island will prove irresistible to sunseekers looking for peace and seclusion since they are neither organised nor much frequented. Impressive sculptured rocks, black sand, volcanic pebbles, small ports with fishing boats casting colourful reflections on azure waters and a few beech trees are the trademarks of Xiropigado, Vourvoulos and Exo Gialos.

On the south-eastern side of Santorini, sun-loving tourists will encounter magnificent black sandy or pebbly beaches. Monolithos is strongly recommended for families, as the water is very swallow compared to other Santorini beaches and there are facilities, like playgrounds, to keep the children entertained. Young people can have fun in a beach bar or at a beach volley playground. Soak up the atmosphere along the lively waterfront at one of the charming beach bars or bask in the turquoise blue waters of the cosmopolitan beach of Kamari, one of the island’s most crowded and organised beaches! Amongst Santorini’s most sought after beaches, especially among young people, are Perissa, Perivolos and Agios Georgios, which actually stretch out one after another to create the longest black sandy beach on the island; bustling beach bars, diving and water sport centres (including jet ski, parasailing, wind surfing and canoe-kayak) and beautiful-people-watching! Could you ask for more?

Let’s go south, where the (semi-organised) beach of Vlychada with its grey sand, its huge rock formations sculpted over the years by the wind and its unique lunar landscape awaits us! Recently a large modern marina which is home to the Sailing and Yacht Club of Santorini has been constructed here. Nearby lies the beach of Almyra, where sun worshippers can enjoy a beautiful quiet beach with impressive sea-sculpted rocks in the background. The Akrotiri area is famous for its ruins of an ancient town but tan-seeking sunbathers will also discover some marvellous beaches there. Caldera is a small and very quiet beach with black sand and deep crystal clear waters which enjoys an unrivalled view of the volcano, while Gialos is a secluded beach accessible only by jeep.

Close to the excavation site of Akrotiri you will find what is probably the most famous beach on the island, the Red Beach! What makes the beach absolutely irresistible is its impressive red rock formations, which form a breathtaking unique volcanic landscape. Access involves a walk from the harbour of Akrotiri (around 10 minutes) or by boat from Kamari, Akrotiri and Perissa, but the all-red landscape is certainly worth the trek! The nearby White Beach is another stunning seascape that you simply must not miss! Black sand, big grey and white pebbles and gigantic white rocks form a bizarre setting like you’ve never seen before.

While you are on Santorini you can also take part in an exciting sea excursion departing from the old port of Firá or from Athinios port, depending on which trip you choose. Visit the two small islands at the centre of Caldera, Palea and Nea Kameni, the “volcano” according to the locals, or combine your excursion with a visit to Thirassia and Oia. And of course…could you think of anything more romantic than watching the famous Santorini sunset onboard?

Last but not least, some tips for action lovers:

How to book a tour for Santorini?