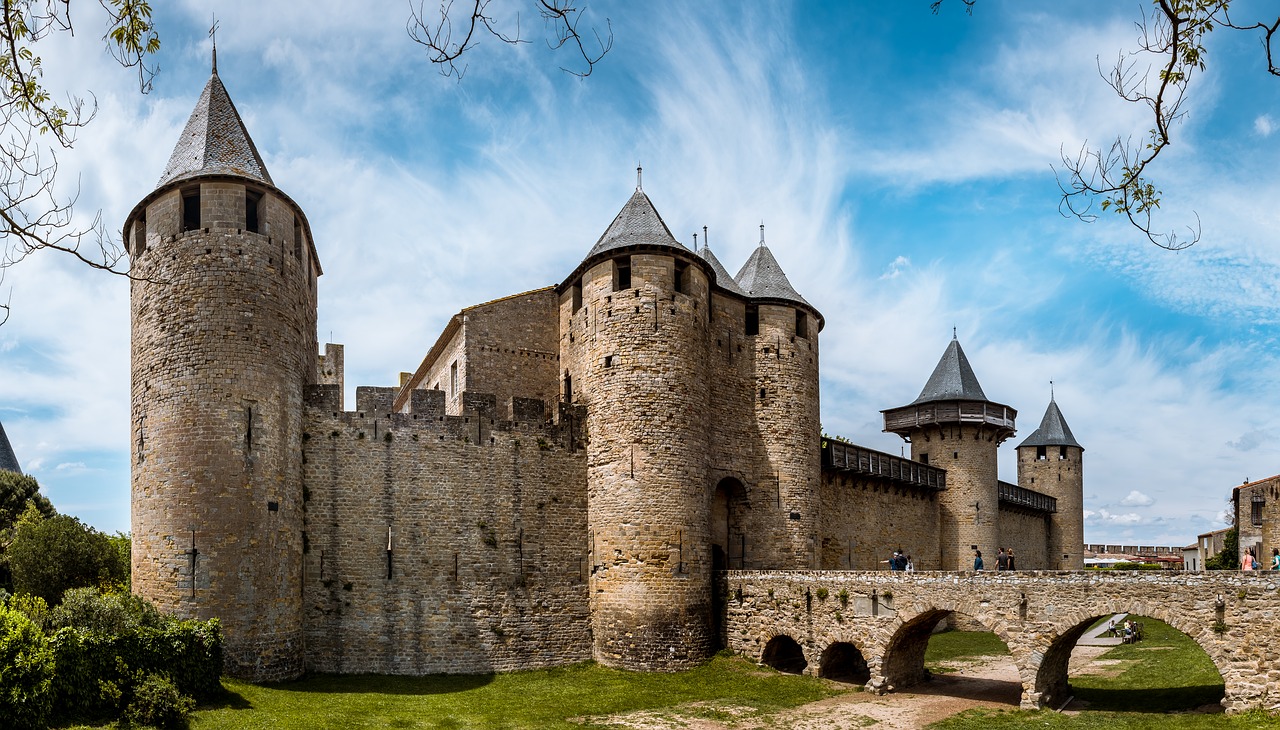 Carcassonne Travel Guide – Located right on the main Toulouse–Montpellier train link, visiting Carcassonne is a must for anyone traveling through the Languedoc region. Though popularly believed to be one city, Carcassonne is made up of two towns and this division is due to the war against the Cathars. Separated into the lively ville basse and the dramatic La Cité, Carcassonne is the second most visited destination in France after the Eiffel Tower. Its highlight is the double-walled and turreted fortress that crowns the hill above the River Aude and from a distance, the fortified old town seems to be straight out of a fairy-tale medieval. Admission to the streets or the grassy lices – “lists” – between the walls is free in Carcassonne and cars are banned from 10 am to 6 pm. A guided tour is required for exploring the inner fortress Château Comtal and walk the walls. The beautiful church of St-Nazaire with its tranquil combination of nave with carved capitals in the Romanesque style and a Gothic choir and transepts, along with some of the loveliest stained glass in Languedoc, is also not to be missed. Climb the tower for most spectacular views over the La Cité.

How to Get to Carcassonne

If you are staying in Carcassonne, then everything is within walking distance. La Cité (Medieval town) and La Bastide (lower town) are only 15 minutes apart from each way.

Though summer is the liveliest time to visit Carcassonne, it is the peak season for tourism there. Go there either in autumn or spring, for quieter moments and beautiful change of season landscape.

Carcassonne is worth the visit. Nowhere in Europe, is there a fortified medieval city, which is as exquisitely preserved as the imposing La Cité and it came with a tremendous heritage too. Due to its strategic location of being perched on the rocky outcrop overlooking the River Aude, Carcassonne has been much coveted throughout history. Historians believe that the town may have been fortified even before the Romans started building their walled citadels there and the final touches to the magnificent fortified town are credited to Saint-Louis and his successor Philip the Bold. They completed its architectural glory towards the end of the 13th century and Carcassonne survived virtually intact until the mid-1800‘s owing to the protection of the French military. In the last half of that century, the brilliant architect Eugéne-Emmanuel Viollet-le-Duc took up the prestigious project of restoring Carcassonne and what we see today are the fruits of his hard labour.

You can walk around the old town of Carcassonne in about 30 minutes but give it about 3 hours to enjoy the historic place to the fullest. Highlights include spectacular views of the Pyrenees, The Black Mountain, and Bastide Saint Louis, or the lower town.

The Basilica of Saint Nazarius and Celus

Located inside the ramparts, it is a national monument whose architecture is inspired by the Gothic-Romanesque tradition. Complete with stained glass windows that filter and refract the beauty of the afternoon sun in an almost ethereal manner, it is an experience not to be missed. Go inside the Viscount’s Castle to take in the medieval artifacts and explore the Cathar history of the region. Make sure you are there before 4 pm to have at least an hour to get around.

Dating at least 4 centuries back, some old buildings of the lower town are from the 17th and 18th century. It is a lively place for relaxing, people watching, and shopping local produce. At the main square of Place Carnot, a little market is held on Tuesday, Thursday, and Saturday. There are loads of lively bars, restaurants, and cafes to for relaxing at the main square. Take a short stroll from Place Carnot to go to the church of Saint Vincent. An epitome of Languedoc Gothic architecture on the outside, it has beautifully decorated interiors with paintings from Gamelin, Nicolas Mignard, and Pierre Subleyras. Enjoy the breath-taking views from the tower. The Fine Arts Museum is 10 minutes walk from Church Saint Vincent and it is a cultural must-see. It houses a collection of paintings and ceramics from the 17th century to the modern day and hosts three temporary exhibitions per year. Entrance is free.

The canal port at Carcassonne is one of the busiest, and you can enjoy a half or whole-day canal trip from here. Renting a boat for a week or two is also possible. Have fun on a half-day trip by getting a picnic and floating down the tunnel of plane trees either to the west towards Bram or to the east through Trèbes.

In the undulating hills of the Haut-Minervois, around 20 minutes north of Carcassonne, lies one of the most picturesque of the region’s Cathar castles. Las Tour’s four towers sit along the spine of a hill, just above a small village and it is a very atmospheric place. On your way back, it is advisable to explore the pretty village of Caune-en-Minervois, with its medieval abbey and winding streets.