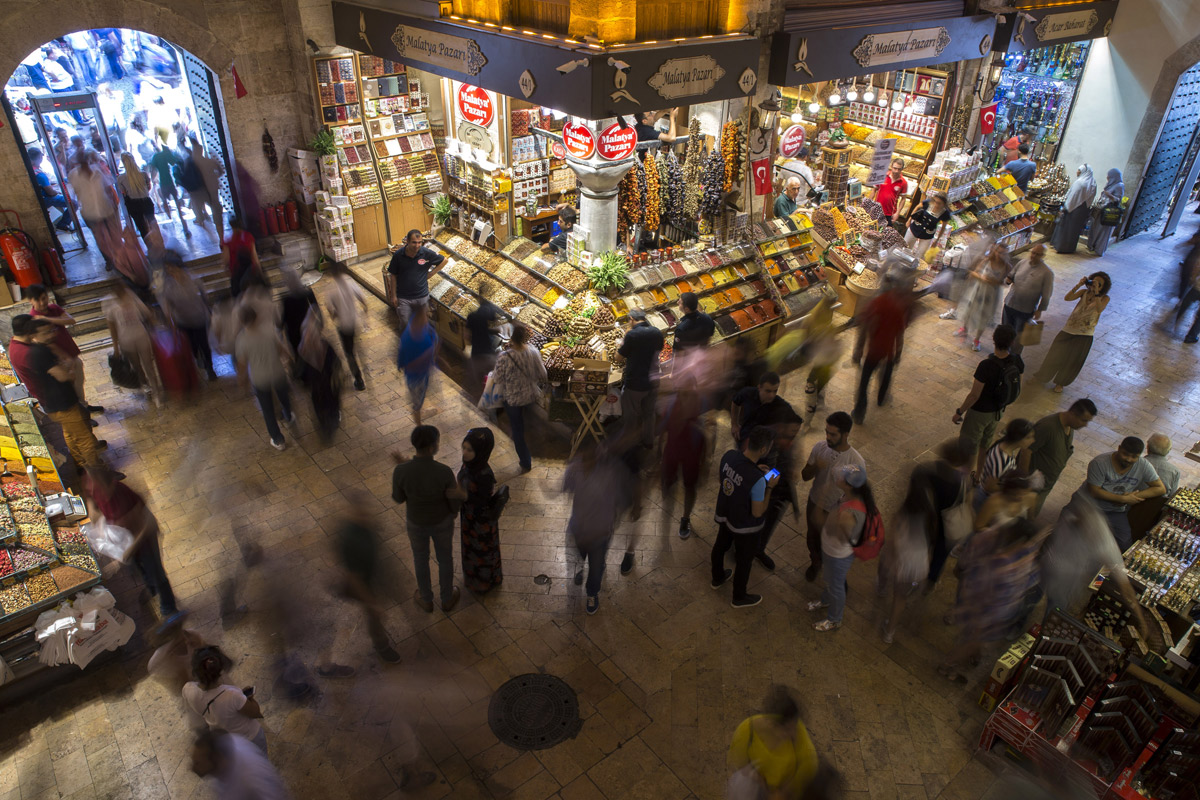 One of the oldest covered bazaars in İstanbul, the Spice Bazaar aka famous Egyptian Bazaar is located in the Eminönü district of İstanbul, behind New Mosque and adjacent to the Flower Market. Continuing its existence since 17th century, the Egyptian Bazaar originated from the Makron Envolos Bazaar which was located in the same place in Byzantine times. The Venetian and Genoese people were doing business in that bazaar. The Jew people were also residing in the same area during Ottoman times. Along with the construction of New Mosque, the Jew people in Eminönü were transferred to Balat district.

The Egyptian Bazaar was indeed founded with the intention of monetary assistance to New Mosque during its construction. Initiated by Safiye Sultan, mother of Sultan Murat III., in 10 Muharram 1006 (1957), the construction was completed by Hatice Turhan Sultan, mother of Sultan Murat IV., after a long period of stagnation. The architects were Davut Aga and Mustafa Aga. Spice Bazaar (Egyptian Bazaar) Visit

The Egyptian Bazaar building used to be utilized as madrasa in its early days. Following the uprising of the residing mullahs, the madrasa was converted to bazaar. Formerly known as the Valide Bazaar, it later earned reputation with the name of Egyptian Bazaar as the spices that were sold in the bazaar were coming from Egypt. Converted to bazaar, the building was allocated between herbalists and cotton dealers. 3 (Fish Bazaar, Mat and Linen Dealers) of the 6 gates were allocated to herbalists; and the rest (New Mosque, Haseki and Flower Market) to the cotton dealers.

The shops allocated to herbalists were consisting of two sections. While retail sale and presentation of spice containers were made in the wooden front section, the back section was used for storing and manufacturing purposes. The wooden pull-down shutters used to be taken down at nights after closure. The space in front of the shops used be prinked up with wooden ornaments; and the spices be stored in glass jars, earthenware pots, wooden or tin cans of various shapes. In the eaves of some shops, there used to be a symbol (fire tower, a little boat, ostrich egg, scissors, tassel and etc.) to get easily recognized. With the assistance of those symbols, people could easily find the intended shop and give directions to others.

No matter how much the outlook may have changed in time, the Spice Bazaar still continues its existence as a valuable cultural heritage from the Ottoman Empire at the present time. Having two great fires respectively in 1691 and 1940 then finally Bazaar is extensively restored by Directorate General of Foundations between 2013 and 2018. In Egyptian Bazaar, most of stores are herbalists and spice stores. In addition these; there are different types of stores selling side dishes, dried nuts and fruits, plants, healing herbs, olives, dried fruit roll-ups, handicrafts, textiles, gold and silver jewelry. Aimed at the ones who cannot put up with the diversion in “flavor and taste” caused by industrialization, “farm-made” or “farm-originating” cheeses, pastirma types – wind-dried beef – sujuk and legumes are also exclusively offered in the bazaar. And the Egyptian Bazaar does not seem to be eager to lose this traditional characteristic anytime soon. Outside of the Egyptian Bazaar, greengrocers, snack and appetizer stores and fish stores are located on the west; and flower markets and pet stores on the east. From any kind of aquarium fish to the flower seeds that you can only find in the pages of an encyclopedia, one can find almost anything that he or she is looking for. The Egyptian Bazaar is in the service of İstanbul people seven days a week.

What can I buy from Spice Bazaar?

A distinctively sweet aromatic spice used in Turkish cuisine from the Ottoman period. Its smell and flavours are strong enough to change the whole style of the food. Cinnamon, which plays a role in Turkish cuisine in stick and powder form, is often used in the rice used for stuffing vegetables, lamb and chicken dishes. It is also an indispensable aroma in Turkish desserts. Cinnamon is added to beverages such as boza and salep, which are unique to Turkish cuisine. It is a source of polyphenol antioxidants, helps reduce cholesterol, regulate blood pressure, increase body resistance and treat fungal infections. Cinnamon also has a weight-loss feature due to its effects on fat burning.

This maroon/burgundy colored spice is made from the berries of the wild Rhus Coriaria bush. It has a citric tartness that comes from the malic acid inside.  Use it in salad dressings instead of lemon, or stir it into freshly steamed vegetables with a little olive oil.

These dried red pepper flakes are a mainstay of Turkish dishes, and you’ll find it beside the salt in most Turkish restaurants. It comes in varying degrees of spiciness so it’s best to taste before you buy and look out for isot biber – a smoky variety from Urfa. Sprinkle it into stews, or over grilled meat.

Made from a pomegranate reduction, this thick, viscous syrup is another Turkish kitchen essential. Use in in the place of Balsamic vinegar to sharpen up a salad, or to create a marinade or glaze for salmon or poultry. 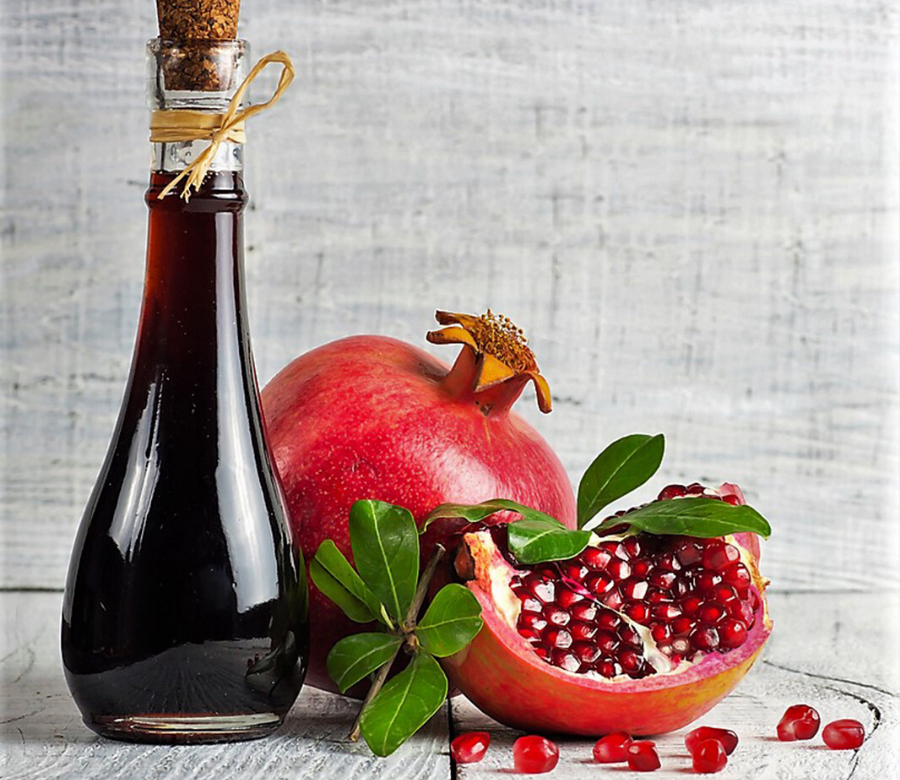 The clove spice is obtained by drying the dark small nail-shaped buds of the clove flower and plays an integral role in Turkish cuisine. It is especially used in sherbets and compotes with its intense taste and dominant smell. Cloves, which are also used in the production of cakes and desserts, are also included in herbal teas such as black tea, consumed by many Turks. Cloves have been one of the strongest known natural antiseptics used in the medical industry for centuries. Cloves increase edema and are good for throat and stomach ailments. It can also be chewed, as it is good for oral health. The dominant smell of cloves, are good for tooth and gum pain. They also refresh breath. If you eat onions and garlic, many people in Turkey pop one of these in their mouths afterwards to eliminate bad breath. Many restaurants offer cloves with the bill.

The Intense aromatic flavour of cumin is an indispensable spice in Turkish cuisine and is used a lot in the popular dishes of köfte (meatballs) and meat dishes. Turkish locals prefer their cumin in powder form and it is hardly ever used in its seed form. The intense aroma of cumin grown in Anatolia is used especially to suppress the smell of meat. Cumin is also used to make spicy sausages also known as sucuk. Among the many health benefits, it is very good for asthma, increases immunity, facilitates digestion, delays cell ageing and excellent for anaemia. Nursing mothers use it to remove gas from their infants.

Black pepper, which is widely used all over the world, adds its flavour to every dish in Turkish cuisine. The most common use is in a dry form and generally black grains are ground and used as powder. The flavoured and bitter taste of black pepper is used in both cooking and at the serving stages. Black pepper is known to facilitate digestion and fat burning due to its antioxidant effect. It is frequently consumed by those suffering from a cold, as it strengthens immunity.

Known in English as Nigella seeds (or sometimes as black cumin), the name literally translates to ‘bun’s herb’. If you’re following Turkish recipes, try sprinkling it onto breads, cakes, or savory pastries, just before baking.

The bay leaf accompanies many delicious flavours in Turkish cuisine. They are collected and dried form the bay tree. Bay leaves, which change the taste of the whole dish with its pleasant aroma, are not edible plants. It is a spice that is used only as a fragrance. It is generally used in dishes that have a tomato sauce and meat dishes made from fish, beef, poultry and game animals. Another usage area in Turkish cuisine is in the production of canned and pickled goods. As it is antiseptic, it has a preventive effect against diseases.

Rosemary is obtained from the leaves of a dwarf tree grown in the Mediterranean. The leaf of this tree has a pleasant smell and is always green. It is used in Turkish cuisine a lot. The small thin spiny leaves are used both fresh and dried. Due to its pleasant smell, the oil of rosemary leaf is used both in meals, herbal medicines and cosmetics. It is also consumed in fresh rosemary tea. It’s used for making meat dishes and sauces. It also has many health benefits. Reduces stress and creates a relaxation effect. Rich in antioxidants, vitamins and minerals.

Thyme, a plant that grows almost everywhere in Anatolia, is usually picked in the mountains. It is widely used in Turkish cuisine, dried or crumbled. Thyme, which has a sharp aroma, is especially preferred in meat dishes. In fact, farmers who feed their cattle with thyme in Anatolia offer the tastiest meat. Thyme in Turkish cuisine is not limited to food. Fresh thyme brewed in hot water is often consumed as a tea. It also has antiseptic properties and provides a wide range of benefits from high blood pressure, heart diseases to digestive problems.

It may look the part, but ‘Turkish saffron‘: it isn’t actually saffron at all, but dried safflower, which has little color or flavor. For the real deal, look out for the fine strands of Iranian Saffron, but expect to pay much more.

With its intense essence and refreshing flavours, mint is a favourite herb used in salads, appetizers, cold juices, stuffed vegetables (dolma) and yoghurt dishes. Mint is also goof for stomach ailments and helps with your respiratory tract.