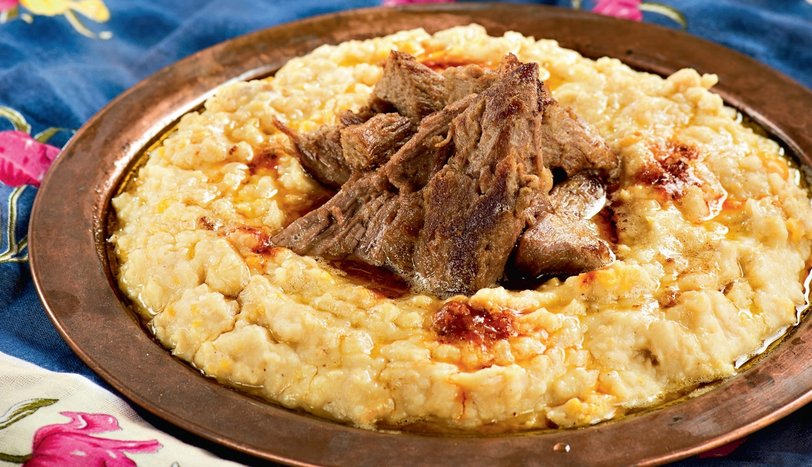 Turkish Food Traditions : Yes, you’ve read this title correctly. Most people are familiar with UNESCO World Heritage Sites—but did you know that the United Nations also recognizes ‘intangible culture’ as something to celebrate and safeguard? Turkish cuisine has such a vibrant food culture that some elements have made it onto the UNESCO Lists. Cultural elements that lack a physical form but are instead expressed through knowledge, skill or ritual are equally important to shaping living culture. These include artistic performances, festivals, social practices, oral heritage, craftsmanship—and of course, gastronomic traditions.

Food and culture are interwoven. The processes involved in preparing, serving and sharing certain foods and drinks might appear simple, but they often carry important social and cultural significance. Recipes and dietary practices can be used to transmit knowledge from one generation to the next. Making and eating certain foods as part of a celebration can solidify social bonds. For travelers, getting to know the local food scene and joining in with culinary traditions is one of the best ways to deepen your knowledge and enrich your experience. As of January 2021, UNESCO recognizes 23 food and drink-related traditions as part of its Representative List of the Intangible Cultural Heritage of Humanity. Some of them are made in Turkey. As new culinary traditions are recognized each year, they’ll be added too.

Living in Turkey, we get to experience on a daily basis how significant food in Turkey is. People have dishes for celebrations and mourning, for almost any occasion in life. It is all about sharing, sharing the event, and the food that is associated with it. Turkish cuisine is still based on tradition, recipes, and preparation methods that are passed on to each next generation. And that is why visiting Turkey’s food cities and tasting authentic food is a profound experience.

Flatbread, lavash, or yufka is heavenly. This bread has become almost a symbol of the sharing culture that is entangled in Turkey’s traditions. It usually takes about three people to make that bread. Depending on where the bread is prepared, it is baked in either a stone or earth oven in the ground, on a metal plate, or in a cauldron. People serve flatbread alongside a regular meal, but also share it at weddings, births, or other social or religious gatherings or holidays. Traditionally, a couple’s neighbors receive flatbread at a wedding for prosperity. The culture of making and sharing flatbread in communities of Azerbaijan, Iran, Kazakhstan, Kyrgyzstan and Turkey carries social functions that have enabled it to continue as a widely-practiced tradition. Making the bread (lavash or yufka) involves at least three people, often family members, with each having a role in its preparation and baking. In rural areas, neighbors participate in the process together. Traditional bakeries also make the bread. It is baked using a tandir(an earth or stone oven in the ground), sac (a metal plate) or kazan (a cauldron). Besides regular meals, flatbread is shared at weddings, births, funerals, various holidays and during prayers. Read more about Turkish Bread

Keşkek is a wheat stew with meat or chicken that is traditionally served as part of wedding celebrations or religious holidays. They wash the wheat with prayers a day earlier, before carrying it to a large stone mortar. This happens to the music from a zurna (double-reed pipe) and a davul (drum). Two to four persons with gavels hull the wheat at the mortar in a firm rhythm. Keşkek is customarily cooked outdoors; adding chunks of meat on the bone, hulled wheat, onions, spices, water, and oil to the cauldron and cooked it all night. Women and men work together to cook wheat and meat called ‘Keşkek’ in huge cauldrons, then serve it to the guests. The wheat is washed with prayers the preceding day, and then carried to a large stone mortar, to the accompaniment of music from the davul drum and zurna double-reed pipe. At the mortar it is hulled by two to four persons using gavels in a fixed rhythm. Cooking is usually carried out outdoors: hulled wheat, chunks of meat on the bone, onions, spices, water and oil are added to the cauldron and cooked all night. Towards noon, the strongest of the village youth are called to beat the Keşkek with wooden mallets, while the crowd cheers and zurna players perform musical pieces, announcing the thickening of the stew with a specific melody. Numerous expressions associated with the dish – used during the selection of wheat, the blessings, praying and carrying the wheat, as well as preparing and cooking it – have become common expressions in daily life. In addition, the tradition encompasses entertainment, plays and musical performances. Neighboring towns and villages are invited to feast collectively in the ceremony premises. The cooking tradition is safeguarded and transmitted by master cooks to apprentices.

The Mesir Macunu festival of Manisa, Turkey, commemorates the recovery of Hafsa Sultan, mother of Suleiman the Magnificent, who was cured of a disease by the invention of a paste known as mesir macunu. The Sultan then ordered that the paste be disseminated to the public. So, every year from 21 to 24 March, the paste is prepared by a chef and apprentices from 41 fresh spices and herbs according to traditional practice. A team of 14 women wrap the paste in small pieces of paper, and 28 imams and apprentices bless it before scattering the paste from the top of the minaret and the domes of the Sultan Mosque. Thousands of people come from different regions of Turkey to compete to catch the pieces as they fall. Many believe that by so doing their wishes for marriage, work and children will come true within a year. A 45-piece orchestra dressed in traditional clothing perform historical Ottoman music during the preparation of the paste and throughout the festival. Inhabitants of Manisa have a deep emotional attachment to the festival. The strength of tradition creates a strong sense of solidarity among local communities, and the city welcomes guests from almost all regions of Turkey.

Turkish coffee combines special preparation and brewing techniques with a rich communal traditional culture. The freshly roasted beans are ground to a fine powder; then the ground coffee, cold water and sugar are added to a coffee pot and brewed slowly on a stove to produce the desired foam. The beverage is served in small cups, accompanied by a glass of water, and is mainly drunk in coffee-houses where people meet to converse, share news and read books. The tradition itself is a symbol of hospitality, friendship, refinement and entertainment that permeates all walks of life. An invitation for coffee among friends provides an opportunity for intimate talk and the sharing of daily concerns. Turkish coffee also plays an important role on social occasions such as engagement ceremonies and holidays; its knowledge and rituals are transmitted informally by family members through observation and participation. The grounds left in the empty cup are often used to tell a person’s fortune. Turkish coffee is regarded as part of Turkish cultural heritage: it is celebrated in literature and songs, and is an indispensable part of ceremonial occasions. Read more Turkish Coffee Culture