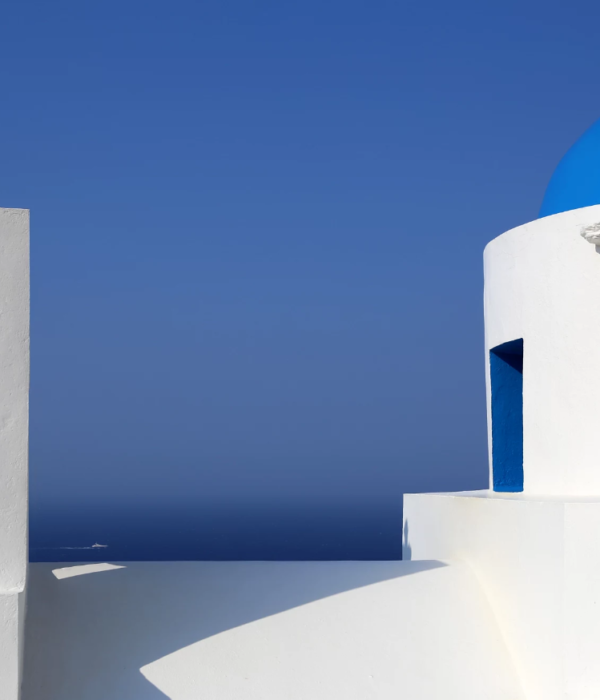 Did you know that the 1988 movie “Le Grand Bleu” with Jean Reno was shot on the island of Amorgos, at the south eastern edge of the Cyclades?

Amorgos is one of the most impressive Cycladic islands, boasting marvellous beaches with azure waters, gorgeous caves, ideal spots for diving, scenic bays and ancient footpaths leading through its steep rocky terrain… Inhabited since the Early Cycladic Era, as indicated by archaeological finds brought to light in the area, Amorgos has a long cultural history and tradition. Step off the beaten track and visit an island that has preserved its traditional colour, where the locals welcome you with a smile on their face and make you feel at home!

Built at the centre of the island and surrounded by rocky hills, the maze-like Chora of Amorgos is considered to be one of the most picturesque in the Cyclades! Here you can admire a breathtaking setting with scenic squares, traditional Cycladic houses with bougainvillea trees in their court yards and Lilliputian whitewashed alleys. In the morning you can wander around the narrow streets, visit the 13th century castle and the monasteries or relax at a local coffee shop; in the evening pick one of the cosy bars and tavernas scattered around Chora’s streets and squares and enjoy local specialties accompanied by a shot of  psimeni raki! Don’t be surprised if you come across a big group of people enjoying an impromptu feast – it is a very common event on the island- feel free to join in! 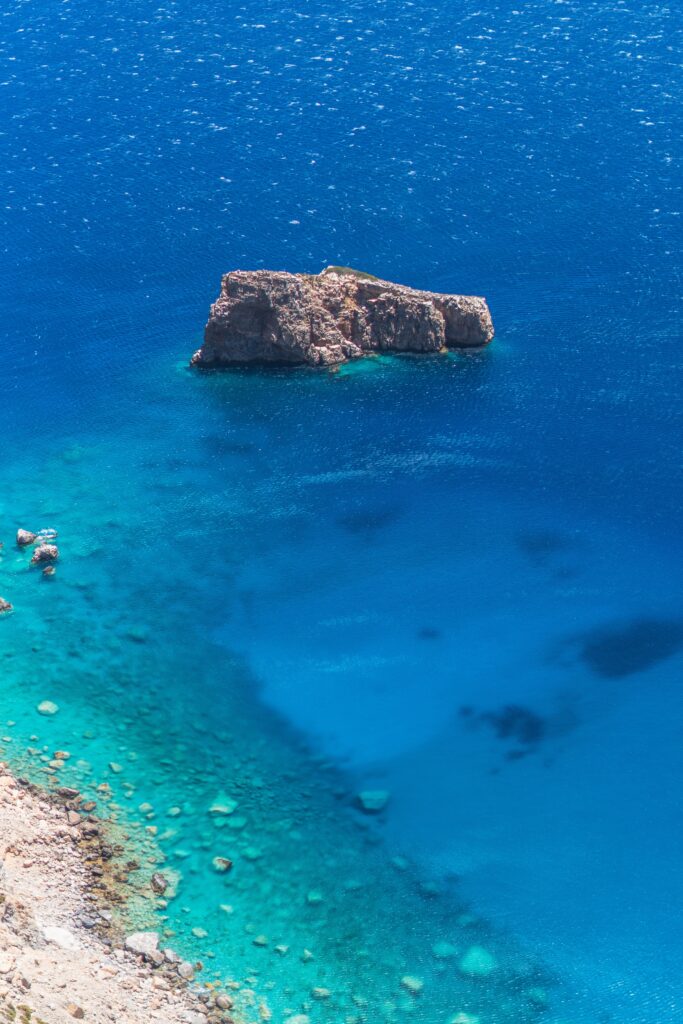 Katapola is the main harbour of the island as well as a haven for boats and small cruise ships. Set off on a boat trip from Katapola and explore the island’s sun kissed beaches!

Aigiali is the second harbour of Amorgos Island. It is a place very popular among young people as there is a camping site. Along its lively waterfront you will find plenty of cafes and restaurants. Perched on the mountain side beyond Aigiali there are three picturesque villages: Tholaria, Lagkada and Potamos. Make a point of visiting them at the end of the day – the sunset view is beautiful.

The island’s top attraction is the 10th century cliffside monastery of Panagia Hozoviotissa, dedicated to the Presentation of the Virgin, a spiritual haven and one of the most important ecclesiastic monuments in Greece. Set high up on the steepest rock of Mt. Profitis Elias, 300m above the Aegean, the building resembles a “chest of drawers”, according to the French explorer Pitton de Tournefort. Visible only from the sea, the monastery is an example of human triumph over nature, a wonder that will leave you awestruck.

According to tradition, the monastery was founded by the Byzantine Emperor Alexios I Komnenos in 1088, during the period of Iconoclasm, when the icon of Panayia was sent by a woman from Hozovo from Palestine and miraculously made its way to Amorgos. According to another version, the Monastery was founded in the 9th century by monks from Palestine and was later renovated by the emperor Alexios I Komnenos. The monastery has eight floors connected by narrow stone staircases carved into the rock. 350 steps lead you to the monastery, the interior of which is like a labyrinth. The cells of the monks are all carved into the rock to form a unique example of traditional architecture. Two icons of the Virgin Mary and other religious relics from the period of Alexios Komninos have been found at the monastery. Important heirlooms such as a manuscript, gospels, vestments and ecclesiastical utensils dating from the 10th to the 19th century are also on display. 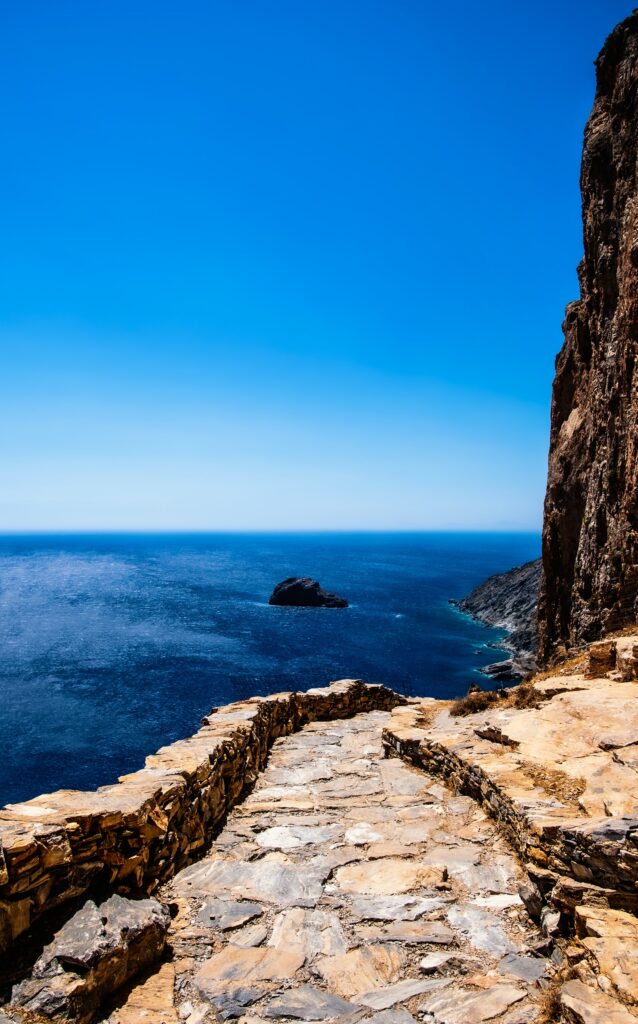 There is a stunning view of the island’s wild beauty from the highest balcony of the Monastery. On the 21st of November there is a celebration of the Presentation of the Virgin Mary, the highlight of which is the procession of Her holy icon. After the procession there is a massive feast with plenty of food, wine and delicious traditional sweets!

There are seven routes on the island, sign-posted, along which you can discover the island’s diverse flora and fauna and its rich cultural treasures. They offer superb sea views!

Tip: Wear a pair of comfortable shoes and start early in the morning. Don’t forget to take plenty of water with you and a coat to protect you from the strong winds! 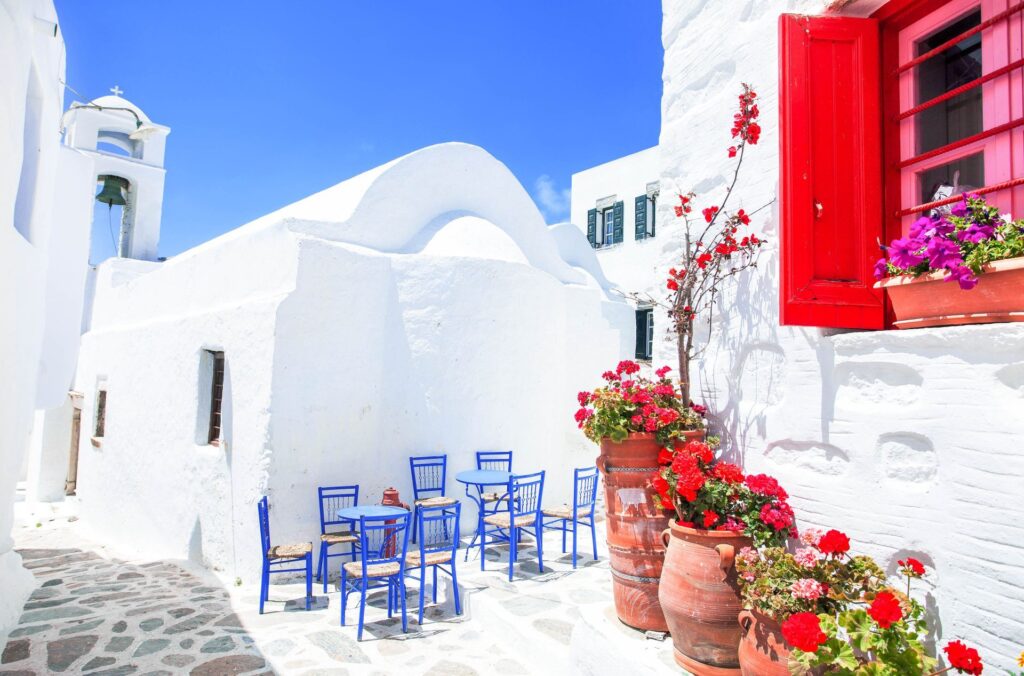 The island boasts scenic bays, underwater caves ideal for diving and golden beaches, most of which are secluded (only a few are organised). You can reach them on foot or by boat. 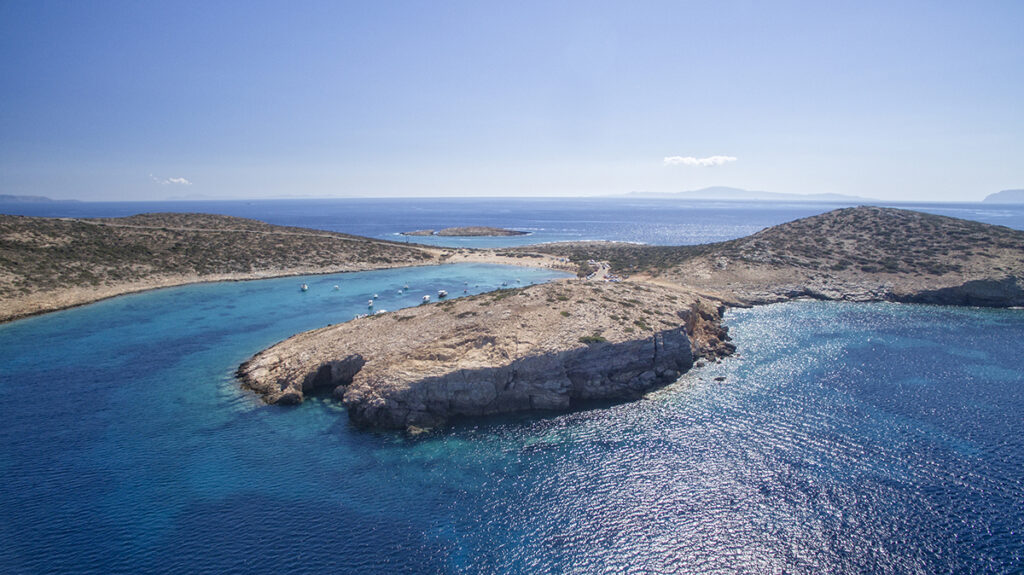