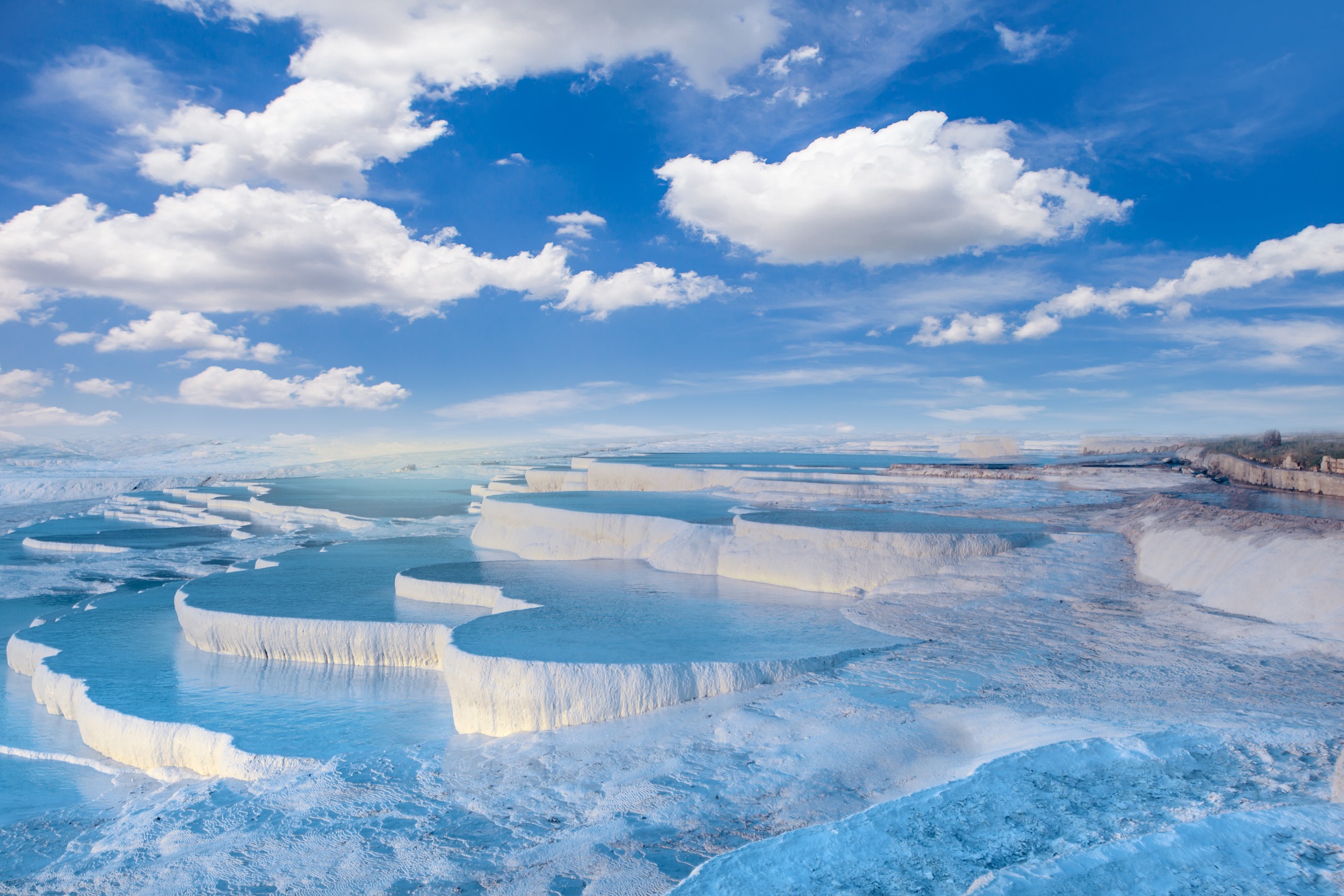 Pamukkale, one of world natural wonders

Tailor-made Pamukkale Vacations – If you don’t find any of the package tours on this website suitable for your schedule, we can create you a personalized tour program.  You can get inspiration from our regular tour packages to make your own custom-made itinerary. You can choose all of the destinations mentioned on our website or include any other palaces anywhere in Turkey. We can also organize a combination of Turkey tours and blue cruises if requested.

It does not matter for us if you are just one person. Do not hesitate to contact us. We will suggest best possible vacation program for individual travelers, small or big groups, which will fit exactly to your vacation period starting from the minute you land in to the airport.

The Archeological Site of Hierapolis

Deriving from springs in a cliff almost 200 m high overlooking the plain of Cürüksu in south-west Turkey, calcite-laden waters have created an unreal landscape, made up of mineral forests, petrified waterfalls and a series of terraced basins given the name of Pamukkale (Cotton Palace). Located in the province of Denizli, this extraordinary landscape was a focus of interest for visitors to the nearby Hellenistic spa town of Hierapolis, founded by the Attalid kings of Pergamom at the end of the 2nd century B.C., at the site of an ancient cult. Its hot springs were also used for scouring and drying wool. Ceded to Rome in 133 B.C., Hierapolis flourished, reaching its peak of importance in the 2nd and 3rd centuries A.D., having been destroyed by an earthquake in 60 A.D. and rebuilt. Remains of the Greco-Roman period include baths, temple ruins, a monumental arch, a nymphaeum, a necropolis and a theatre. Following the acceptance of Christianity by the emperor Constantine and his establishment of Constantinople as the ‘new Rome’ in 330 A.D., the town was made a bishopric. As the place of St. Philip’s martyrdom in 80 A.D., commemorated by his Martyrium building in the 5th century, Hierapolis with its several churches became an important religious center for the Eastern Roman Empire.

The combination of striking natural formations and the development of a complex system of canals, bringing the thermal water to nearby villages and fields, is exceptional. The springs are the source of a hydraulic system extending 70 km northwest to Alasehir and westwards along the valley of the Menderes River. Pamukkale forms an important backdrop to the original Greco-Roman town of Hierapolis and the cultural landscape which dominates the area.

Criterion (iii): Hierapolis is an exceptional example of a Greco-Roman thermal installation established on an extraordinary natural site. The therapeutic virtues of the waters were exploited at the various thermal installations, which included immense hot basins and pools for swimming. Hydrotherapy was accompanied by religious practices, which developed in relation to local cults. The Temple of Apollo, which includes several Chtonian divinities, was erected on a geological fault from which noxious vapours escaped. The theatre, which dates from the time of Severus, is decorated with an admirable frieze depicting a ritual procession and a sacrifice to the Ephesian Artemis. The necropolis, which extends over 2 kilometres, affords a vast panorama of the funerary practices of the Greco-Roman era.

Criterion (iv): The Christian monuments of Hierapolis, erected between the 4th and the 6th centuries, constitute an outstanding example of an Early Christian architectural group with a cathedral, baptistery and churches. The most important monument, situated outside the north-west wall of the city, is the Martyrium of St. Philip. At the top of a monumental stairway, the octagonal layout of the building is remarkable because of its ingenious spatial organization. Radiating from the central octagon are chapels, polygonal halls and triangular rooms, which combine to culminate in a square structure encircled by rectangular cells bordered with porticoes.

Criterion (vii): Calcite-laden waters from hot springs, emerging from a cliff almost 200 metres high overlooking the plain, have created a visually stunning landscape at Pamukkale. These mineralized waters have generated a series of petrified waterfalls, stalactites and pools with step-like terraces, some of which are less than a meter in height while others are as high as six meters. Fresh deposits of calcium carbonate give these formations a dazzling white coating. The Turkish name Pamukkale, meaning “cotton castle”, is derived from this striking landscape.

The property is largely intact and includes all the attributes necessary to express its Outstanding Universal Value, based on the strong and tight integration between the natural landscape (the white travertine terraces and numerous thermal springs) and culture (the city ruins from the Greco-Roman and Byzantine period, especially the theatre and the necropolis). The boundaries of the site are adequate to reflect the site’s significance.

The main threats to the integrity of the property are high numbers of international tourists that represent a very important economic resource for the regional economy. The area of the small lake formed by earthquakes and thermal sources around the ancient civil agora, where thousands of tourists can swim between the ancient columns and marble architectural decorations, is particularly threatened. This has led to biological pollution and constant erosion of the ancient Roman marble elements, and the relevant authorities are planning to set up a monitoring system to assist in managing this problem.

Most of the property is free of modern buildings and the architectural monuments can easily be appreciated. Some old monuments are in use again, for example the theatre is used for performances with participation of thousands of people, while excavation and restoration works on the site are still going on. All the projects are based on anastylosis methods such as in the frons scaenae of the theatre, the gymnasium and the templon of the church of St. Philip.The monumental and archaeological remains truthfully and credibly express the Outstanding Universal Value of the property in terms of its setting, form, and materials. The mausoleums and Tripolis Street in the north necropolis, the city walls from the south eastern Roman Gate to the travertine terraces, the Latrina located to the east of Domitian Gate, the colonnaded street and the Gymnasium have been restored. The structure of the Bath-Basilica, which suffered earthquake damage, has been reinforced.

Pamukkale and Hierapolis is legally protected through national conservation legislation, but there is no specific planning legislation to protect World Heritage properties. The responsibility for managing and conserving the property is shared by the national Government (the Ministry of Culture and Tourism and the Ministry of Environment and Urbanism), local administration (Denizli Provincial Special Administration) and several State institutions. The approval of the Regional Conservation Council and Provincial Directorate for Environment and Urbanism has to be obtained for physical interventions and functional changes in the site. Tailor-made Pamukkale Vacations

The site was registered as a first degree natural and archaeological site in 1980 by decision of the Supreme Council for Antiquities and Monuments. In 1990, an area of approximately 66 km2 (larger than the World Heritage property) was registered as a “special protected area” by decision of Cabinet. Visitor centers at the northern and southern entrances to the site have been built, and a conservation plan approved. Hotel buildings on site and structures around the thermal pool have been removed; entry of private vehicles into the site is forbidden, except for emergencies; public transportation is provided for visitors. The road passing through the south-eastern travertine terraces has been closed; visitor routes and information panels are provided within the site, and tourist facilities are restricted to the edge of the monumental area. Visitor access to the travertine terraces is prohibited in order to sustain the water flow and to maintain the colour and structure of the travertine terraces. Areas where visitors can bathe in the hot springs have been established.

An agreement between the Ministry of Culture and Tourism and the Provincial Special Administration has established a Site Management Directorate within Denizli Provincial Special Administration, which oversees the procedures and principles to conserve, develop and manage the site. This Directorate provides coordination between various stakeholders and landscaping, security and cleaning services. An advisory board, composed of central and local administrations, non-governmental organizations and scientific groups (in particular the head of the excavation team) provides recommendations to the Site Management Directorate concerning projects in the site. The Italian excavation team (that has been extensively investigating the site since 1957) has specified policies for a management plan aimed at determining the standards for restoration and rehabilitation, based on the Venice Charter (1964) for conservation of historical monuments. This includes accessibility and visitor management, policies for enhancing perception of the site, and risk management.

As the travel plans of so many of us collapsed with the spread of the coronavirus pandemic, the only possible way to visit the archaeological sites and museums is to go online and check which collections have already been digitized. In the case of Turkey, the Ministry of Culture and Tourism established Sanal Muze website that offers a 3D experience of some of the best-known state-run archaeological and ethnographic museums. The downside of this project is the fact that even though the museums offer descriptions of the exhibits, they are only available in Turkish at the moment. Click here to visit virtually Hierapolis

See our packages that include Pamukkale Hierapolis with at least 1  overnight ;

See our combined packages Turkey and Greece that include Pamukkale with at least 1 overnight;