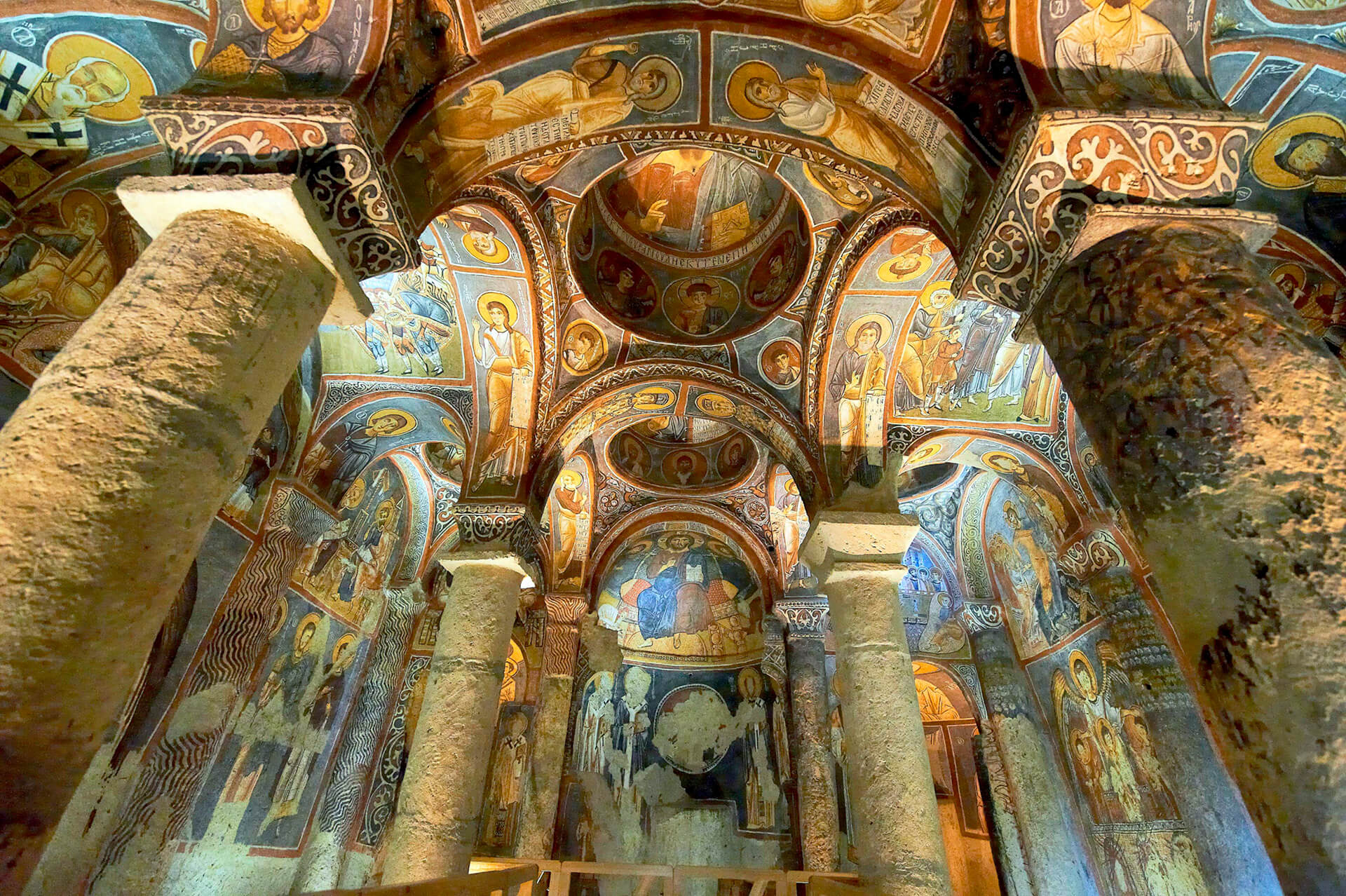 UNESCO Sites in Turkey – The story of Turkey goes back much, much further than you may be aware. This is the land that gave rise to the earliest known human cities. This is the land of mighty empires: Hittite, Lycian, Roman, Ottoman. This is the land of Troy, of the epic war and the fabled horse that led to its fall. It’s the land that unites continents. Fast forward, and Turkey is now a land of incredible travel opportunities, a country that’s preserved the thousands of years of history that have unfolded within its borders and made it possible for us to experience it today. This is a land of UNESCO World Heritage Sites , of outdoor adventures, culture, and cuisine, the land of turquoise.

Packed to the brim with ancient monuments left over from a parade of conquerors, and endowed with showcase scenery that never fails to impress, Turkey is a dazzling destination that straddles Asia and Europe. Its vibrant culture, famous food, and vast history wow all who venture here, while its glorious landscapes-from the sun-soaked Mediterranean to the mighty mountains and arid steppe-are highlights in themselves.

At Pamukkale, the seep of hot-spring water over millennia has created a “white castle” of terraced travertine pools and one of the most spectacular landscapes you’ll find anywhere. Its beauty was recognized early on; Pamukkale has served as a spa site for at least 2,200 years. The Greco-Roman town of Hierapolis was established above the pools, and its ruins — temples, bathhouses, a theater, and more — remain.

The Selimiye Mosque is the focal point of this UNESCO site in Edirne, an ancient city in far western Turkey, near the borders with Greece and Bulgaria. Constructed between 1569 and 1575, the mosque is the creation of renowned Ottoman architect Mimar Sinan — he considered it his finest work — and features exquisite interior design. Its four slender minarets reach over 270 feet high and dominate the skyline of Edirne to this day.

Centered on the town of Göreme, in the middle of the country, the national park of the same name and its surrounds comprise one of the most fantastical landscapes in the world. Chief among its features are the hundreds of stone hoodoos — the “fairy chimneys” of Cappadocia. Sculpted by thousands of years of erosion, these formations range from precarious pinnacles to stout pyramids.

A few hours north of Ankara, the city of Safranbolu saw its fortunes rise in the 13th century, when it became a key stop on a major east-west Ottoman trade route. Many of the fine structures built over the next few hundred years are well preserved today: mosques, a bathhouse, a historic inn, and religious education facilities. The city also was widely known for its locally grown saffron (hence the name), and production of the spice continues on a small scale today.

From approximately 1600 to 1180 BC, the Hittites established and expanded an empire that at its height covered most of modern-day Turkey, along with slices of Mesopotamia and the Levant. Their capital was Hattusha, near what is today Boğazkale in the Black Sea region. The ancient imperial city sat atop a rocky hillock and featured a series of protective walls and elaborately carved stone gates — the Lion Gate, seen above, is the best preserved. Walking through the remains of this great settlement, it’s inspiring to imagine the power that once dwelt here.

Ephesus is another site whose lineage goes waaaay back. Serving as a capital of the Kingdom of Arzawa as early as 1500 BC and later falling under Greek control, many of the structures that remain today date to the Roman period starting in 129 BC. The status of Ephesus in antiquity was legendary — it was one of the 12 cities of the Ionian League under the Greeks; the site of the Temple of Artemis, one of the Seven Wonders of the Ancient World; and was one the largest cities in the Roman Empire. It was also home to the Apostles Paul and John and features in early Christian texts. Today, the main sites at Ephesus include the Library of Celsus, the Great Theatre, the Basilica of St. John, and the nearby Ephesus Archaeological Museum.

Istanbul likely needs no introduction, even if it’s the only place in Turkey you’ve heard of. This city linking Europe and Asia across the Bosphorus has played a pivotal role in the rise and fall of world empires, going by names such as Byzantium and Constantinople prior to acquiring its present moniker. Its history, both storied and visible, is incredibly rich. UNESCO recognizes four distinct zones:

At the 7,000ft Mount Nemrut, its summit is a tumulus mound of stones, artificial terraces, and abundant statuary — all suggesting the presence of a royal tomb from the 1st century BC. The heads of the statues have tumbled from their original perches to a lower terrace, but apart from that the work is quite well preserved.  Unesco Sites in Turkey

It’s true: When the Greeks launched their thousand ships to recapture Helen of Troy, their destination was present-day Turkey, right across the Aegean Sea. After years of bloody battle, the Greeks pretended surrender and built a great wooden horse as a purported gift to the Trojans…and the rest is history (or myth, or a fusion of the two; no one’s really sure).

The region of east-central Turkey where Divriği lies was one of the early Turkish conquests in Anatolia, and the Great Mosque here was founded 1228 AD. Its architecture is imposing to say the least, the exterior featuring elaborate stone carvings around three high, recessed gates, the interior impressive examples of stone columns and vaulted ceilings. The adjacent hospital, founded at the same time, is an equally extraordinary structure.

A city rule off and on by both Greeks and Persians in antiquity, its heyday came in the Hellenistic period, when it served as the capital of the Kingdom of Pergamon under the Attalids. It prospered as a center of learning and modeled its Acropolis (the ruins of which are on display today) after that of Athens. Temples, theaters, a library, and other structures make up the historic site, located just outside of Bergama near Turkey’s Aegean coast.

Somewhere around 9000 BC, people in this part of the world began doing something that, to our knowledge, had never been done before: settling down. The birth of agriculture is credited with bringing an end to our species’ nomadic, hunter-gatherer lifestyle and leading to the creation of permanent villages, towns, and eventually cities and civilizations. Çatalhöyük is one of the earliest of these yet found. Located near Konya in southern Turkey, it appears to have comprised mainly domestic residences, arranged in a honeycomb-like structure. The population is estimated to have reached 10,000 — an unprecedented metropolis by the standards of the time.

In the city of Diyarbakır in southeastern Turkey, ancient and modern are interwoven. Sitting on the banks of the Upper Tigris River, today’s Diyarbakır surrounds the sprawling site of the old city and fortress, with its preserved walls and watchtowers, ruins, and elevated views out over the river basin. The Hevsel Gardens form a green corridor that connects the city to the Tigris and once provided food and water for those living within the walls.

Cumalıkızık, you can still get a sense for early Ottoman life by walking the cobblestone lanes and admiring the preserved architectural styles. If you visit during winter, make sure to check out the ski resort of Mount Uludağ, just outside of Bursa. Related: Unesco Sites in Turkey

A sanctuary dedicated to the mythological figure Leto — mother of Apollo and Artemis — called the Letoon is located nearby. Xanthos is the place for those interested in the history and legacy of the Lycians…one among the hosts of sites and civilizations that tell the story of Turkey. Unesco Sites in Turkey