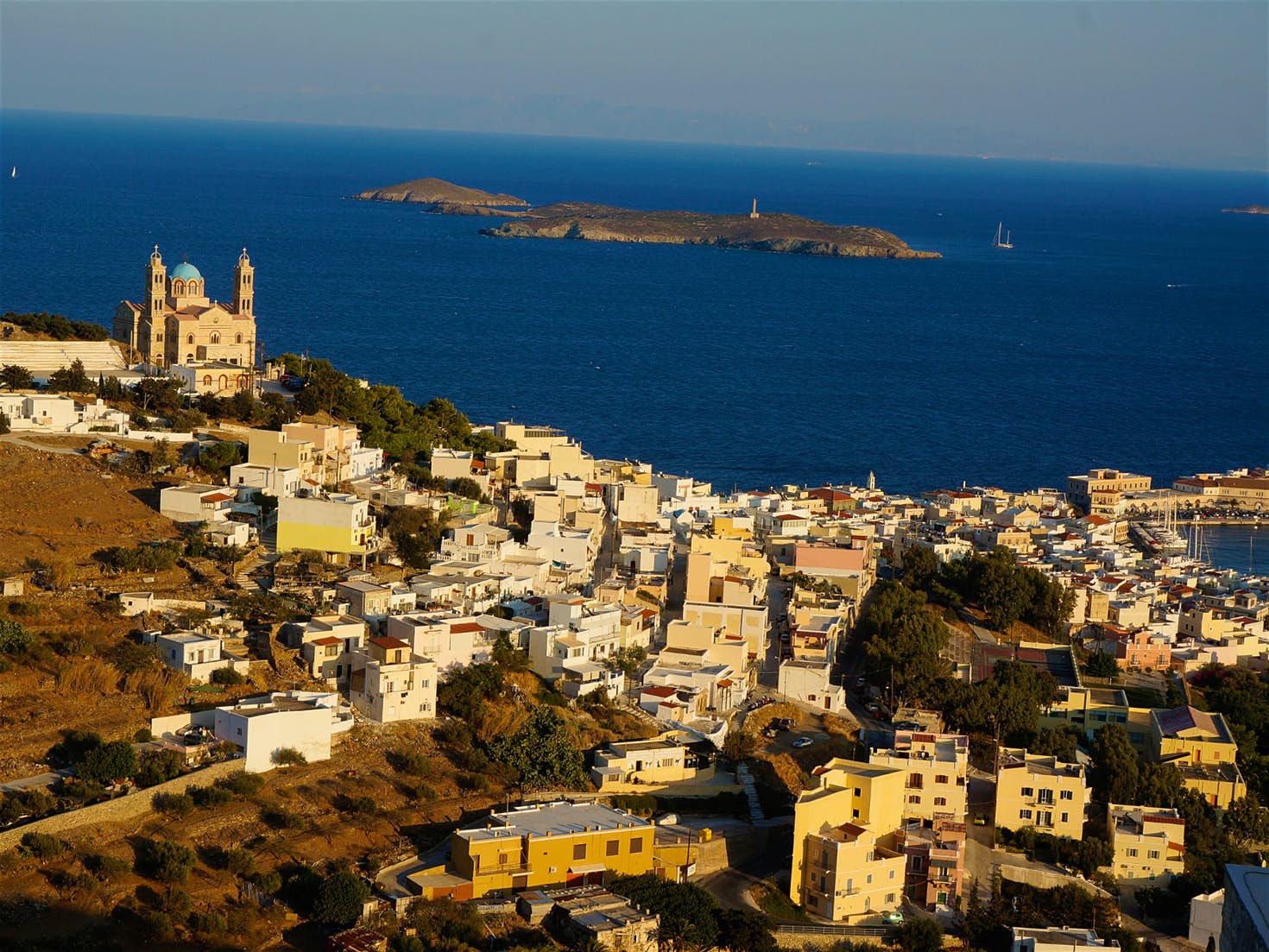 Syros Island Greece, was the largest cultural and trade centre of the Aegean in the 19th century and capital Ermoupolis was Greece’s principal port.

From the time of the Fourth Crusade (13th Century) until 1568 Syros belonged to the Duchy of Naxos. After that period the island had a significant Roman Catholic minority which was under the protection of France from piracy and the during Turkish occupation. The For this reason the island remained neutral during the War of Independence and people from other islands who escaped massacres found refuge in Syros and built the island’s capital -Ermoupolis- between the district of Ano Syros and the sea front.

Today Ermoupolis is Cyclades Islands capital and evidence of its past glories can be seen on public buildings, on neoclassical houses and at the beautiful squares. The combination of natural beauty, the numerous wonderful beaches, the magnificent neoclassical buildings, the long history, the hospitable inhabitants, the night life, the unique culture of the island will make your vacation in Syros unforgettable. Syros is famous for Loukoumi (delight gummy squares flavored with roses) and Halvadopitta (nougat-like).

Since Syros is the administrative centre and Ermoupolis is the capital of Cyclades, the island is connected with most of Cyclades Islands, many Dodecannese Islands (Patmos, Leros, Kos, Rhodes, Astypalaia) and North East Aegean Islands (Ikaria, Samos). The frequent schedules to Cyclades include Tinos, Mykonos, Paros, Naxos Islands. Syros is connected to Piraeus and Lavrio ports. Syros domestic flights connect the Island to Athens. Syros has a daily ferry connection with Athens via Piraeus, throughout the year. Blue Star Ferries and Hellenic Seaways operate the Piraeus – Syros route in less than 4 hours. During the summer season, connections between the port of Rafina and Syros might also become available.

There is a good bus service around the island, from Ermoupolis to Galissas, Finikas, Dellagrazia, Megas Yialos, Vari.
Another round service runs from Ermoupolis to Talanta, Galissas, Vissa, Parakopi, Ano Mana. Agathopes, Komito, Kini, Faneromeni are also served. Taxis, car and motorbike rental is also available.

The Archeological Museum in Ermoupolis

In April 1833, the first archeological school divided the country into 3 large archeological regions: the Peloponnese, Sterea Ellada and the islands of the Aegean Sea. Hermoupolis was chosen to house the seat of the Archeological Department of the Islands of the Aegean Sea. Ioannis Kokonis was appointed head of the division of the Cyclades. In 1834, a small archeological museum was opened. Its first collection consisted of inscriptions from Syros and Rinia, and was housed in the building of the secondary school.
In 1888, it became The Central Museum of the Cyclades . In 1899, a part of the Townhall (designed by the architect Ernestos Ziller) was donated to the secondary school by the Hermoupolis Municipality. The school is still there today.
Finds from the Protocycladic culture to the Byzantine era are exhibited in the three halls of the museum.

The Apollon Theatre is situated behind the Town Hall, close to the 1st Secondary School of Hermoupolis. It was built in 1861 to the design of the French architect Chabeau and its outward appearance presents a small-scale copy of the Scala of Milan. Its rich paintings and ornate wooden tiers were destroyed during the numerous catastrophies that befell the building.

The Historical archives are situated to the left from the Town Hall, in the palace of Ladopoulou. It contains numerous registrations and an important collection of records. Precious information and records concerning Hermoupolis and the Cyclades on the whole, are kept in this imposing neoclassic building. There is also an archive of the Italian ruling class at the period of their occupation of the Cyclades. Registration began in 1977-78. Today, records are presented in complete order and are available for studying the history of the island and of the Cyclades in general.

The Vaporia Quarter, the architectural jewel of Hermoupolis, is situated behind the church of Agios Nikolaos. A number of magnificent, restored buildings, with their wonderful frescoes, are situated here. Their proud occupants mainly belonged to the island’s powerful shipowners’ dynasty. This part of the town offers a breathtaking panoramic view of the Aegean Sea.

Piatsa is the centre of Ano Syros. Lately, Piatsa has seen an increase in shops and places for entertainment, particulary of the musical kind. It is the site of the bronze bust of Markos Vamvakaris, and it still is the most lively part of the village, thus attracting many visitors. This is the place for visitors who wish to combine sightseeing with a sampling of the excellent local specialities while enjoying the magic atmosphere of the island.

The most important church of Hermoupolis and nowadays the seat of the Mitropolis (bishop). Excellent woodcarvings and icons.

This church houses one of the masterpieces of religious art, an icon by the hand of Domenikos Theotokoupoulos, also known as “El Greco”, and illustrating the “Kimisi tis Theotokou”(dormition of the Mother of God). It is generally assumed that this icon was brought here from Venice.

The church of Saint George (Agios Georgios), is situated on top of the hill of Ano Syros. It has been the cathedral (“Mitropolis”) of the island’s catholic community since 1652. It was built in about 1200 A.D. and since then has been restored more than 3 times. In 1617, it was destroyed by the Turks. It acquired its present appearance after 1834. The icons of Saint George and the Panagia tis Elpidas (Virgin Mary of the hope) are well-known and treated with great reverence.

The chapel of Agios Stefanos is built on the rocks just above the sea.

the capital, offers the main sightseeing on Syros and was founded during the war of Independence by refugees mainly from Psara and Chios and other islands to become Greece’s main port in the 19th century.

The town is divided in to three quarters. The waterfront and two hills each crowned with a church, the Roman Catholic and the Orthodox. The Orthodox (Vrotando) quarter is topped with the beautiful beautiful church of Anastasi and the views over Tinos and Mykonos are wonderful.
The Catholic (Ano Syros) quarter with the medieval Venetian town and the nice maze of narrow lanes and archways is dominated by the Cathedral of St George. The Capuchin Covent of St Jean is of special interest and was founded in 1653 by France’s Louis XIII.

Ermoupolis’ central square, Plateia Mialoulis, with the town hall is impressive. Just behind the square stands the beautiful Apollon Theatre which is a miniature of La Scala Milan. There is an Archaeological Museum with finds from Syros and the Municipal Library with interesting and rare editions.

Vaporia, Ermoupolis’ district with painted ceilings and frescoes neo-classical mansions, is where the sea-captains used to live. There are some excellent churches such as the church of Kimisis with an outstanding bell tower and icons painted by Domenicos Theotocopoulos (El Greco), the church of Agios Demetrios, and the church of Tris Hierarches and Metamorphosis – the Orthodox Cathedral.

was named so after the Catholic church Santa Maria Della Grazia. It is full of gardens and pine trees and preserves the nobility that the first genuine Greek middle class of Hermoupolis created in the 19th century. It is a wonderful spot with tree lined streets and mansions which once owned by wealthy shipowners. Fetouris, Agathopes, Komito are some of the most cosmopolitan beaches of Syros Island.

is a lovely holiday resort with lined trees. There are hotels, rooms, taverns and bars for your entertainment.

is a lively resort with a beautiful sheltered beach. There are taverns, rooms to rent and hotels including a large complex (A category) with air conditioned rooms. restaurants, bar, piano bar, swimming pool, children’s pool, disco, tennis and many more. There are remains from a Venetian castle while the sea-side in-cave chapel of Agios Stephanos is worth a visit.

is a picturesque fishing harbour with beautiful beaches. There are taverns, hotels and rooms to stay. Not far away from Kini is the Monastery of Agia Varvara which also has a school of arts and crafts.

is a beautiful resort bellow a hillside. It has a long narrow beach lined with trees.

is located in the south east part of the Syros island and there is a characteristic tower which creates a medieval atmosphere. Next to it, Fabrika and Azolimnosare spread with picturesque cafes, taverns and hotels. Fokiotrypes (seal’s holes) which face Aspronisi islet, are a shelter for seals and seagulls. The plain, spread with stubble modern cultivations, draw-wells, farm houses and cisterns discloses agricultural life.

with its bay and Agios Georgios is a tourist resort. Megas Yialos spreads along the south coast of the island.

Colorful and mesmeric, Syros is an island of Cyclades boasting a distinctive identity. Syros local dishes only add to this genuine character, introducing travelers to a unique feast of the senses. Through high quality local products, traditional recipes and eclectic ingredients in unique combinations, culinary wonders take place on this lovely part of the world. Join Syros cuisine and enjoy!  Read more on Greek Cheese, Gastronomy in Greece , Greek Food,  Greek wine

First of all, we could not leave out the most famous local delicacy of Syros. Syros loukoumia (Turkish delights) are by far the most recognizable product on the island. Using starch, sugar and water, the locals go above and beyond to produce wonderful versions with rose, pistachio, almond, walnuts and many many other flavors. They are served with caster sugar and are the perfect accompaniment for Greek coffee. Similarly famous and equally flavorful, halvadopita is another great dessert of Syros. Its name is nougat pie in Greek and it uses honey, almonds, egg whites and vanilla.

Continuing on with Syros local dishes, aetopita is definitely a place to start. It is a local pie made of fish and vegetables. The freshness of the sea is highlighted in every single bite. Marathopita is another type of pie, made of fennel and other vegetables. It is a wonderful dish that you can taste from early in the morning. Pork with cabbage or pork with quince are two versions of a homemade recipe that has been loved by both locals and travelers. The islanders adore pork and this is why they are well known for producing exceptional pork sausages. Try them out as parts of stuffings in pies, omelets or on their own, as meze (small treats to taste along with ouzo, tsipouro, wine or beer).

Karaboloi are snails that have been handpicked and cooked to perfection, along with tomato sauce. And local cheese varieties, such as San Michali cheese, xynotyro, marathotyri and gruyere are exquisite to taste. They complement every single recipe and really skyrocket flavors and senses! With all that, how can you resist Syros local dishes and traditional cuisine