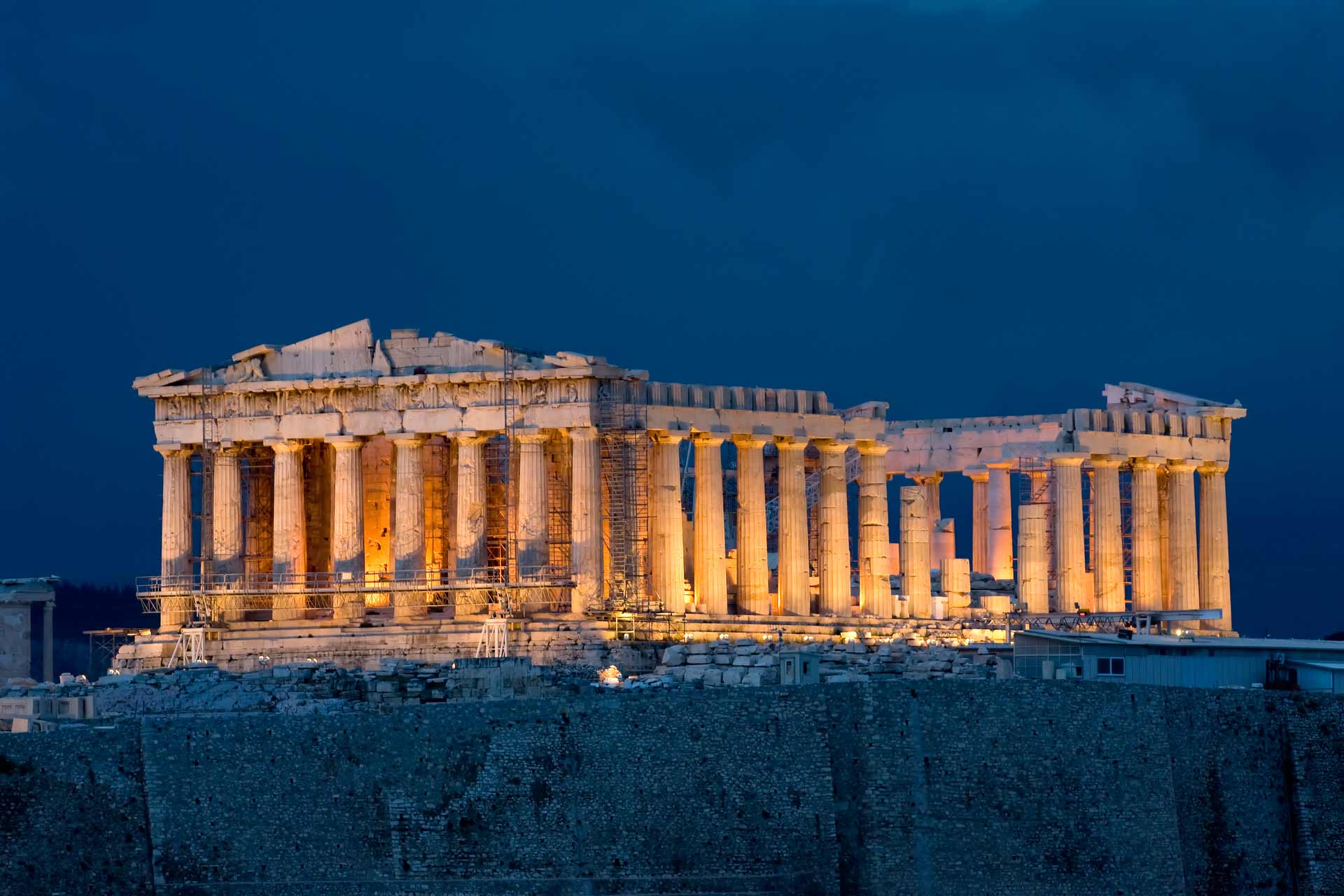 Unesco sites in Greece – Greece is preferentially included on the list of Unesco World Heritage Monuments, satisfying all the institution’s significant and strict criteria. Because of its geographical position, Greece was a crossroad of civilizations that had left their traces everywhere: the architecture of the museums and settlements, miniature art, daily life, nutritional customs and in all forms of popular art in the various regions of the country. The visitor can come into contact with this multi-hued and impressive mosaic through trips into historical, cultural, artistic and folkloric traditions.

The sacred rock was dedicated to the goddess Athena but its slopes were taken over by various other cults. The greatest and finest sanctuary of ancient Athens, dedicated primarily to its patron, the goddess Athena, dominates the center of the modern city from the rocky crag known as the Acropolis. The most celebrated myths of ancient Athens, its greatest religious festivals, earliest cults and several decisive events in the city’s history are all connected to this sacred precinct. The monuments of the Acropolis stand in harmony with their natural setting. These unique masterpieces of ancient architecture combine different orders and styles of Classical art in a most innovative manner and have influenced art and culture for many centuries.

At the foot of Mount Parnassos, within the angle formed by the twin rocks of the Phaedriades, lies the Pan-Hellenic sanctuary of Delphi, which had the most famous oracle of ancient Greece. Delphi was regarded as the centre of the world. The sanctuary of Delphi, set within a most spectacular landscape, was for many centuries the cultural and religious centre and symbol of unity for the Hellenic world.

Epidaurus is one of the most important archaeological findings reflecting the splendour of Greek culture through its imposing beauty. Clear running waters, beautiful natural landscapes and beneficial climatic conditions served to create the ideal place for healing of man with the power of the gods. The Asklepieion at Epidaurus gained fame throughout the world for its unique healing practices as it was undoubtedly the greatest of the theurgical sites in antiquity.

Agio Oros (Mount Athos) is a unique monastic community. It comprises of 20 majestic monasteries. Apart from the monasteries, there are also 12 hermitages, monk communities which constitute a settlement made of huts and cells, ceded by the holy monasteries to small groups of monks.

Agio Oros (Mount Athos) is a unique monastic community. It comprises of 20 majestic monasteries. Apart from the monasteries, there are also 12 hermitages, monk communities which constitute a settlement made of huts and cells, ceded by the holy monasteries to small groups of monks.

Above the town of Kalambáka, on the north-western edge of the Plain of Thessaly, the visitor encounters a breathtaking site of impressive monasteries “balanced” on massive detached stone pinnacles, 400 metres above the ground. Metéora is one of Christianity’s holiest places as well as a landscape of outstanding natural beauty. Thousands of visitors flock to this place every year, attracted by the daunting size of the rock formations where timelessness and beauty prevail, while they seek spiritual enlightenment far away from the earthly bustle.

Visit the mystical tower town of Mystras – in the Peloponese – located six kilometres NW of the city of Sparta, and let yourself be captivated by this destination’s medieval splendour. Wander around the castle city and sense through the silence the city’s sheer grandeur: the Palace of the Despots (Anaktora), the Houses of Laskaris and Frangopoulos, the beautiful Cathedral of Saint Dimitrios and the impressive Monasteries of Our Lady Pantánassa, and of Οur Lady Perivleptos.

In the western Peloponnese, in the beautiful valley of the Alpheios river, lies the most celebrated sanctuary of ancient Greece. Dedicated to Zeus, the father of the gods, it lies on the southwest foot of Mount Kronios, at the confluence of the Alpheios and the Kladeos rivers, in a lush green landscape. Although secluded near the west coast of the Peloponnese, Olympia became the most important religious and athletic centre in Greece.

It’s an ark of history, floating lazily on the waters of the Aegean Sea, just a few miles away from cosmopolitan Mykonos. It’s a chance to walk around the revival of the glory of the Greek civilization. It’s the head priest of the Cyclades, the birthplace of the immortals. It’s Delos.

Monasteries of Daphni, Hosios Loukas and Nea Moni of Chios

What can Nea Moni (the New Monastery) on the island of Chios, Dafni Monastery near Athens, and the Monastery of Hosios Loukas (the Venerable Luke) in Voiotia possibly have in common? All three of these historic monasteries are decorated with the greatest mosaic masterpieces of late Byzantine times. Precious tesserae create explosions of light, composing complex worlds of colour in these places of holy worship. These artists have created mosaics which leave both art historians and travellers speechless; they are a breathtaking expression of devotion and holy celebration.

Archaeological site of Heraion of Samos

Tradition has it that Hera was born and raised here, and for this reason her temple at Heraion was the largest in the antiquity. The most important archaeological site includes the huge (109 m in length, 55 m in width and 25 m. tall) temple of Hera (widely known as Kolona due to the single column that still stands up to this day), the grand altar and the sacred road (the road leading from the city, today known as Pythagoreion, to the temple). Between Pythagoreion and Heraion are the artificial Lakes Glyfades.

The excavation by Professor Manolis Andronikos and his associates under the Great Tumulus of Vergina village in Imathia, Central Macedonia in 1977 brought to light the one of the most important archaeological discoveries of the 20th century in Greece. Today’s Vergina (Ancient Aigai), in the foothills of Mt. Pieria, was the first capital of ancient kingdom of Macedonia, called Aigai. The site of the Royal Tombs under a modern roof hosts the main excavation, as well as an exhibition of the major finds from the burials.

Archaeological sites of Mycenae and Tiryns

The charming and peaceful land of Argolida holds, within the bowels of its earth, one of the most important civilisations ever to see the light of day: the Mycenaean civilisation. It is difficult today to imagine the excitement of Schliemann and Dörpfeld, who with Homer as their guide, revealed one of the greatest cradles of humankind before the eyes of the whole world. The Mycenaean civilisation held dominion over this land, which was inhabited continuously since the dawn of history, and it became the leading light of the ancient known world.

Historic centre (Chora), Monastery of Saint John Theologos and the cave of the Apocalypse in Patmos

The island of Patmos owes its fame to St. John the Evangelist, the most beloved disciple of Christ, and to the monastery, built during the 11th century AD to honour the evangelist’s name. The monastery has always been the “heart” of the island. A small settlement, called Hóra (Chora), started to develop around the monastery and the inhospitable island grew to become the jewel of civilization in the Archipelagus.

The Old Town of Corfu, on the Island of Corfu off the western coasts of Albania and Greece, is located in a strategic position at the entrance of the Adriatic Sea, and has its roots in the 8th century BC. The three forts of the town, designed by renowned Venetian engineers, were used for four centuries to defend the maritime trading interests of the Republic of Venice against the Ottoman Empire. In the course of time, the forts were repaired and partly rebuilt several times, more recently under British rule in the 19th century. The mainly neoclassical housing stock of the Old Town is partly from the Venetian period, partly of later construction, notably the 19th century. As a fortified Mediterranean port, Corfu’s urban and port ensemble is notable for its high level of integrity and authenticity. Unesco Sites in Greece

The Archaeological Site of Philippi, the most important one in the Eastern Macedonian area of Greece, is on UNESCO’s list of World Heritage Monuments since mid-July 2016, satisfying all the institution’s significant and strict criteria. At the 40th Session of the Committee, which took place in Istanbul, from July 10th to 17th, Philippi was unanimously listed as a World Heritage Site.